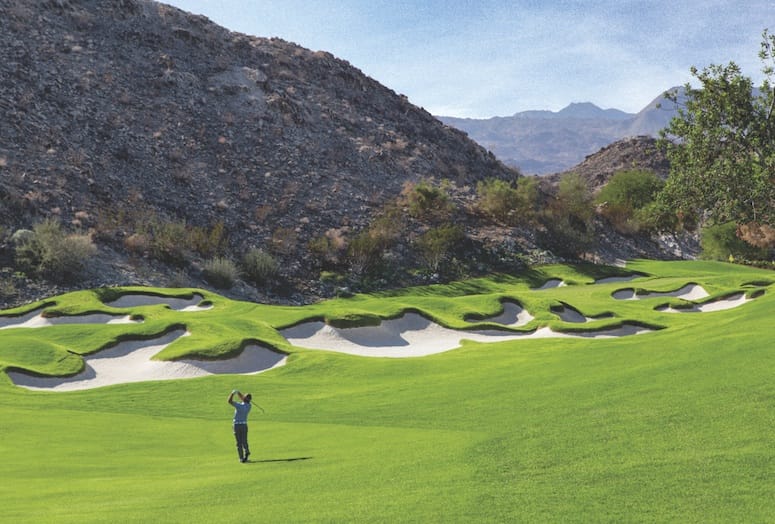 It began with a doily and took less than two rounds of golf to envision how exceptional the 712-acre property at the base of Eisenhower Mountain could be. That was back in the late 1970s, when developer Mick Humphreys—who had traveled to Eldorado Country Club to play a two-day golf tournament—foresaw, with the help of his golf buddies, a private community on a patch of desert that ran alongside part of the course. Naturally, his fellow golfers—colleagues from Northern California who had been accumulating pieces of the Indian Wells land since the 1960s—encouraged the process.

“After the front nine of the second round, I pulled out a doily off the lunch counter,” Humphreys recalls. “We started negotiating the terms of purchase for each piece of property, and I wrote down the numbers. By the time we finished the round, we made a deal and shook hands.” Sunrise at the Mountain Course's 16th hole, considered one of the best in the Coachella Valley.

Making the Dream a Reality

Taking on the leviathan task of building a country club from scratch and creating golf on a fallow property of alluvial deposits found Humphreys vetting some of the world’s top course designers. Jack Nicklaus and Robert Trent Jones Sr. were among the contenders, but ultimately Humphreys found an exact fit in a young up-and-comer on the East Coast.

“I kept hearing about this guy Tom Fazio, the nephew of George Fazio,” Humphreys says. “George was getting the bulk of credit for the Fazio Architects’ work, but Tom was really doing the work.” Though the younger Fazio was known for passing up projects that required travel beyond a prop-jet jump from his Florida home, Humphreys, with the help of mutual friend Bob Hope, managed to successfully court him into what would ultimately become the emerging designer’s groundbreaking project: The Vintage Club’s Mountain Course. Mick Humphreys and Arnold Palmer golf in 1986 during the early years of The Vintage Invitational.

And, with the Invitational serving as the genesis for what would become the Champions Tour, Fazio’s reputation as one of the game’s premier architectural minds was cemented.
Then in 1984, The Club introduced the 18-hole Desert Course, also designed by Fazio. Combined, the courses provided two different styles of golf by one great designer, completing Humphreys’ vision of a full-spectrum golfing experience. The Mountain Course afforded a lushly landscaped links-style course typified by large rolling fairways, while the Desert Course offered more water, bunkers, and landscape hazards. Indeed, the newer of the two courses appealed to the strategist golfer, requiring a good iron game and course management. Today, 35 years after the opening of the Mountain Course and three decades after the Desert Course’s debut, the partnership between Fazio and Humphreys remains as vibrant as ever: Fazio took a hands-on role in The Club’s recent multimillion-dollar Mountain Course redesign.

The four-stage project, completed over four summers and ending in 2014, created an entirely new course virtually from scratch. While the original design was intended to be a parkland-type course with its primary strategic element being the angles of the holes, the new course adjusts for the longer ball flights made possible by modern ball and club technology. The updated design also provides larger landing areas on second shots, as well as approach shots, to the green.

Other improvements include reconfiguring part of the existing lake into various streams. The result is an attractive environment that addresses today’s water conservation needs. Furthering this goal is a new irrigation system and an overall reduction of turf. During the summer of 2014, focus was placed on the back nine, including the famed 16th hole, considered by many to be the best hole in the Coachella Valley. In addition to updating the fairways to current USGA drainage specifications, the renovation introduced creeks and new forward tee boxes.

Members will notice that on the 12th hole, a large bunker has been replaced by a small hazard—a creek. This new feature continues the themes found on holes No. 2 and 8.
The landing area on hole 13 was also widened for greater playability. “We adjusted some of the slope and contours for our middle-tee players, giving them more of a fairway to drive to, rather than having the ball land on a side or steep slope,” says Fazio. A similar treatment can now be found on the 14th hole as well.

For Fazio, the Mountain Course rework mirrors the membership’s dedication to an ever-evolving golf experience. And while the course remodel was indeed an extensive one, Fazio says the philosophy behind The Vintage remains the same as it was from the very beginning: to deliver sensational, high-quality golf that is challenging yet not difficult to play.

“The Vintage Club has an energy to it; it’s a progressive place,” Fazio says. “I’m proud to be a Member—no matter the average age of the membership, it’s among the youngest-thinking I know of.”

Members who have been here since the beginning share a consensus with those who have recently joined: The Vintage isn’t simply a club. Rather, it’s an idea, an outlook, and an ever-evolving ethos of greatness. When making Member-voted improvements to The Club, The Vintage doesn’t simply rebuild.

With an eye on the future, The Club is continually enriched by its membership. “One of the reasons The Vintage Club continues to be so successful is because the Members decide to make the improvements. There is no dictator here,” Humphreys says. “And the Members want it to be the very best. Their willingness to keep improving The Club is really what has made The Vintage what it is today.” The large bunker by the 12th tee of the Mountain Course offers a bucolic setting, replete with a new babbling brook in a spot previously occupied by a large bunker.

Such willingness is complemented by the like-minded character of those inhabiting the celebrated grounds. Vintage kinships develop; off-season activities, such as cruise trips through Europe, have become annual Member adventures. Humphreys estimates that half of the membership travels together during the summer off-season. He also notes that The Vintage has expanded to include a younger generation.

For example, Member Craig Johnson, 60, has witnessed The Club’s growth in concert with three generations of his own family. Johnson’s parents—Liz and the late Ric Johnson—joined The Vintage in the mid-1980s. Today, via The Club’s Legacy Membership Program, the Johnson cottage is enjoyed anew by the younger members of the family.

“I think all clubs are defined by the people who populate them,” Johnson says. “The staff, membership, and culture that’s been created at The Vintage is very unique. When my family is here, we run into a lot of my parents’ closest friends. I associate these families with my own and have watched their kids grow up alongside my own.

“The Club has really shifted toward comfort, with the additional dining where you can be a little more casual and sit outdoors,” Johnson adds. “And it’s more family-friendly; several of my contemporaries have joined over the years, guys my age and below, with younger families who are drawn to a more casual club atmosphere.”

For Humphreys’ part, a passion for the past, a hand on the present, and an eye on the future have resulted in a club, and a home, more unique than he could have ever envisioned.

“As younger Members come in and their desires and tastes are different from the original Members, we have to be cognizant of that,” Humphreys says. “Around the golf world today, play is really down and a lot of clubs are having problems because they’re not paying attention to that. So, in trying to figure out what the 40- and 50-year-olds want, we need to always work on what draws them in. But I must admit that I had no idea that The Club would evolve to the level that it has evolved to,” Humphreys concludes. “If anything, The Vintage Club is better than I ever thought it possibly could be.”