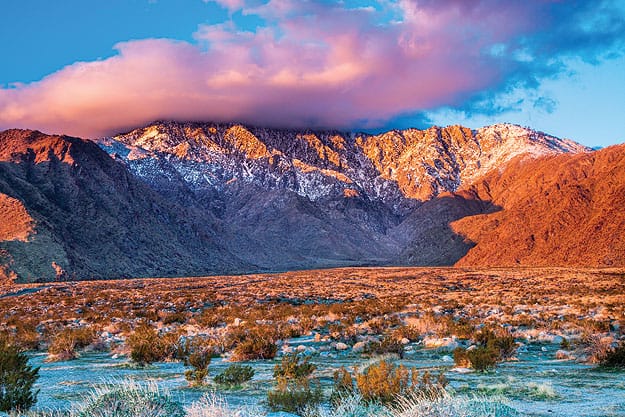 Take the Palm Springs Aerial Tramway up to its Mountain Station and walk through stands of vanilla-scented Jeffrey pines to an overlook where you can rest on a granite boulder and view one of the most extraordinary conservation accomplishments in the United States.

The Coachella Valley’s golf courses, country clubs, restaurants, shops, businesses, schools, and agricultural fields unfold in the loose embrace of mountain ranges and wild lands that begin here in the San Jacinto Mountains, at the western entrance to the valley, and form links to the Santa Rosa, San Bernardino and Little San Bernardino Mountains, Joshua Tree National Park to the north, and Anza Borrego Desert State Park to the south.

This wild “necklace” protects one of the country’s most biodiverse landscapes. The scenic, wildlife, and recreational areas span life zones from the Sonoran Desert to subalpine forests and provide a habitat for more than 500 species of plants and animals — more than 30 of which are rare, threatened, or endangered. They range from the Disneyesque little pocket mouse to the 200-pound peninsular bighorn sheep.

Over the last 30 years, an evolving coalition of nonprofit groups and government agencies has leveraged private and public funds to conserve around 1.3 million acres within Riverside County, almost all of it surrounding the Coachella Valley.

In the process, nine valley cities, along with as many as a dozen public and private agencies and conservation groups, have hammered out agreements that strike a balance between conservation and public recreation. They’ve traded and bought acreage, introduced and supported legislation, raised funds and recruited volunteers, cajoled and lobbied, and pieced together an extraordinary tapestry of wilderness that builds on the legacy of the area’s original inhabitants, the Agua Caliente Band of Cahuilla Indians.

Their ancestral home, the Indian Canyons, sits on tribal land at the southern end of South Palm Canyon Drive. These three canyons — Andreas, Murray, and Palm — feature the world’s largest California fan palm oasis, cool streams, waterfalls, hiking trails, and picnic spots. The tribe owns and operates the canyons, which are listed on the National Register of Historic Places.

The tribe also owns and operates Tahquitz Canyon, located a few blocks from downtown Palm Springs at the western end of Mesquite Avenue. Through the Tahquitz Interpretive Center, visitors can learn about the area’s 3,000-year-old history and hike to Tahquitz Falls, a “place of power” said to rejuvenate and energize all who visit.

Chino Canyon, named for Cahuilla shaman Pedro Chino, was once tribal land. It sits at the entrance to the Palm Springs Aerial Tramway, a landmark Palm Springs attraction that had its beginning in 1935, when young engineer Francis Crocker dreamed of a swift way to the top of Mount San Jacinto. It opened in 1963 and has since welcomed more than 12 million visitors. The tramway’s Mountain Station is right in the middle of the Mount San Jacinto State Park and Wilderness and is the hub for 54 miles of hiking trails.

In 1992, Philip Ferranti started what is now the valley’s largest hiking club. “It took off immediately,” he says, and “last year, there was a 50 percent jump in members. The baby boomers are starting to retire, and hiking is the fastest growing outdoor activity here.”

Ferranti, author of the book 140 Great Hikes In and Near Palm Springs, says that the trails in the Indian Canyons, at the top of the tramway, and all along the valley’s perimeter are the key to ensuring this vast outdoor treasure not only remains, but also expands. “If they use it, they will preserve it,” he says. “People who are hikers work on saving the trails, and they contribute to land purchases.”

Katie Barrows, director of the energy and environmental resources department at the Coachella Valley Association of Governments, says, “Right now, there are almost 500,000 acres protected, with the goal to add around 240,000 acres in the next 30 to 40 years. That’s in an area that totals a million acres.”

Barrows, who has worked in local conservation since the early 1990s, credits the success to cooperation among many agencies with sway over desert lands, as well as the public’s growing appreciation of those lands. However, she foresees an important issue: the interplay of population growth and density, open space, and the cherished views of the mountains. “We are doing very well now,” she says. “That conversation is coming, and we can work it out.”