Why Artist Rebecca Lowry  Dresses Like a Park Ranger 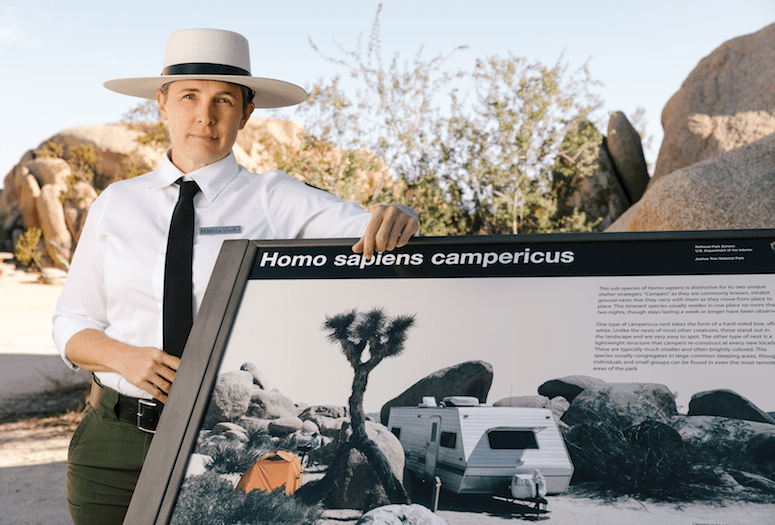 Rebecca Lowry is on hiatus. She has, for at least four years and likely much longer, walked away from her L.A. studio to become an “embedded artist” at Joshua Tree National Park and demonstrate how creative people can solve everyday problems while also capturing the imagination of visitors.

“This is mission-assistive work,” says Lowry, who’s drawing a plan to reconfigure JTNP headquarters to accommodate more staff. “A lot of what I do here is back-of-the-house stuff, creative problem-solving to help the park function better.”

Funded through a National Endowment for the Arts grant and propelled by partnerships with the Joshua Tree National Park and L.A.’s Otis College of Art and Design, where Lowry teaches, she created JT Lab, a model she’s promoting throughout the National Park Service.

The outcomes of her projects benefit the park more than the artist. However, Lowry’s work has yielded at least one small measure of fine art: a series of photographs she made while documenting a preservation project for the park’s Resources Division. While most of the photographs depict stages of the preservation process, some are conceptual.

“One of my goals with JT Lab is to engage with as many divisions in the park as possible: administration, interpretive, maintenance, and resources. That’s the real test of what I’m trying to do.”

Lowry found her way to the national park after years of searching for a comfort zone. She had studied English literature and art history as an undergrad at Boston University but became frustrated because both require constant analysis of other people’s work. “I decided to pursue a generative field,” she says. “I looked at different design fields and picked architecture because it is by far the most rigorous.”

Although Lowry never intended to be an architect after finishing at Harvard University’s Graduate School of Design, she took a job with the Swiss architecture firm Herzog & de Meuron, known for its stadium and museum projects.

After a few years, she moved to L.A., started a studio practice, and taught, first at Cal Poly in Pomona, then at USC. “My studio practice is unlike what I do at the park,” she says. “It’s conceptual, idea-driven work. I never stick to a particular media. I’ve always retained my interest in language and word use.”

Rather than paint tubes and common art supplies, Lowry’s studio was a cacophony of magnetic cassette tape, UPC labels, and other media containing content invisible to the naked eye.
Then she was granted an artist residency at Grand Canyon National Park that exposed her to the idea of using her skills to have a positive effect on the environment.

At the park, she noticed eight empty wayside exhibits along the South Rim Trail. “I proposed to fill these for four weeks, and they let me,” she says, beaming. “It was astonishing.” Each of her informational exhibits eschewed the standard signage basics: the age of the canyon and how it was formed. “That’s all interesting and worthwhile, but I wanted to jostle it out of the cliché. 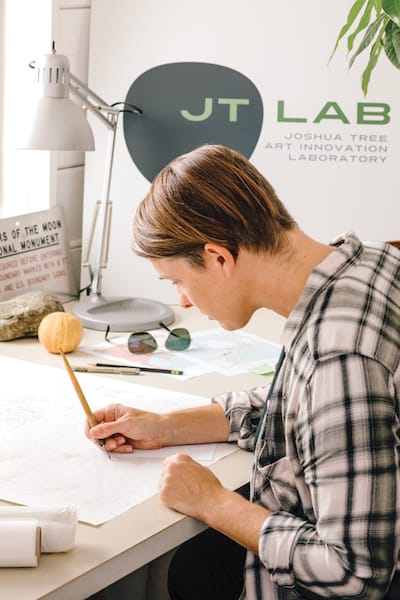 Whether out  working in the  field or creating in her studio, “embedded artist” Rebecca Lowry offers a creative perspective on some of the problems, issues, and solutions at Joshua Tree National Park.

“Some [exhibits] were specific to their orientation. One faced away from the canyon, so I wanted to express how you can think about the Grand Canyon if you’re not looking at it.”

That exhibit encouraged visitors to look away and listen to the canyon. “The way the wind blows is like an Aeolian harp,” Lowry says, noting the Grand Canyon is a void: 5.45 trillion cubic yards of air. “At the end of the trail I leave a thought that people take away: When you’re home, lying in bed, think about what is below you. The rock under you is just as deep.”

During the residency, she also completed a map project and performed a two-hour full-moon reading that spliced excerpts from 1969 Apollo II air-to-ground transcripts and explorer John Wesley Powell’s 1869 diary entries from his voyage into the unknown.

“I was living in Southern California, so a natural thing to do is to reach out to parks close to home,” she says. “I give the administrative staff a lot of credit, especially [chief of interpretation] Jennie Albrinck and David Smith, who came on as superintendent and gave us clearance to proceed.” 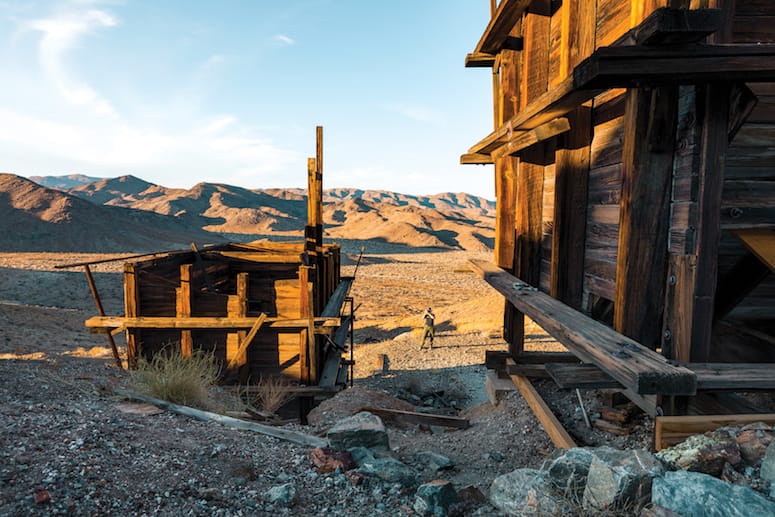 The relationship began with a collaborative class with Otis and a continuation of Lowry’s tongue-in-cheek wayside exhibits. One she created for Joshua Tree visitors identifies Homo sapiens hikerius, “commonly known as ‘hikers’ ” who require “at least 3 liters of water per day,” and suggests “a hand placed in a crevice often provokes adverse reactions from less friendly desert dwellers hiding within.”

“Park visitors are voters,” Lowry intones. “The way to protect the environment is to get people to care, help them find some relevance of these places to their life.”

JT Lab, short for Joshua Tree Innovation Laboratory, was born during the National Park Service’s centennial year, when the NEA offered grants for projects supporting the mission of the national parks. Lowry created three principal components for her project:

• An embedded art professional (Lowry) who provides creative technical and outreach assistance and creates and participates in special events.

• An artist volunteer program, led by Otis alumna Jenny Kane, to invite people to contribute to interpretive or other park projects.

The artist volunteer program includes weekly Artist Teas. One week, filmmaker and photographer Casey Kiernan discussed composing in nature and led participants to his favorite locations in the Cap Rock area. Another week, mixed media artist Barb Skoog demonstrated how to make rubbings from the textures of nature to communicate the experience of being there. Another presenter talked about the musical history of Joshua Tree.

“The goal is to have a broad spectrum of projects and use this as an argument for the park service to engage with artists,” says Lowry, who prefers the moniker “artist in service” to the common “artist in residence” and sometimes wears a ranger-like uniform with a JT Lab patch on the sleeve. “We’re traveling to different regions in the park service, starting in the West, to present what we’re doing and see if anyone would like to work with us.”

Once a site’s management shows interest, Lowry immerses herself in the place, researches its history, examines its public use, determines its needs, and proposes a project.

Lowry eventually will return to her studio practice, but for now she’s on a mission, proving artists — who see the world a little differently than the rest of us and make unusual connections — make valuable contributions wherever they go.