Having just concluded a double celebratory year, Tradition Golf Club is looking forward to the future. In 2022, this peaceful and picture- perfect enclave marked its 25 anniversary as a golf club having gained considerable cachet along the way. Tradition also recognized the passage of 120 years since the property was first homesteaded, endowing it with a rich history.

Who could have predicted the 160 acres that John Marshall acquired from the Southern Pacific Railroad in 1902 would one day emerge as Tradition Golf Club? This land was originally embraced by the Cahuilla Indians who hunted and fished the land. 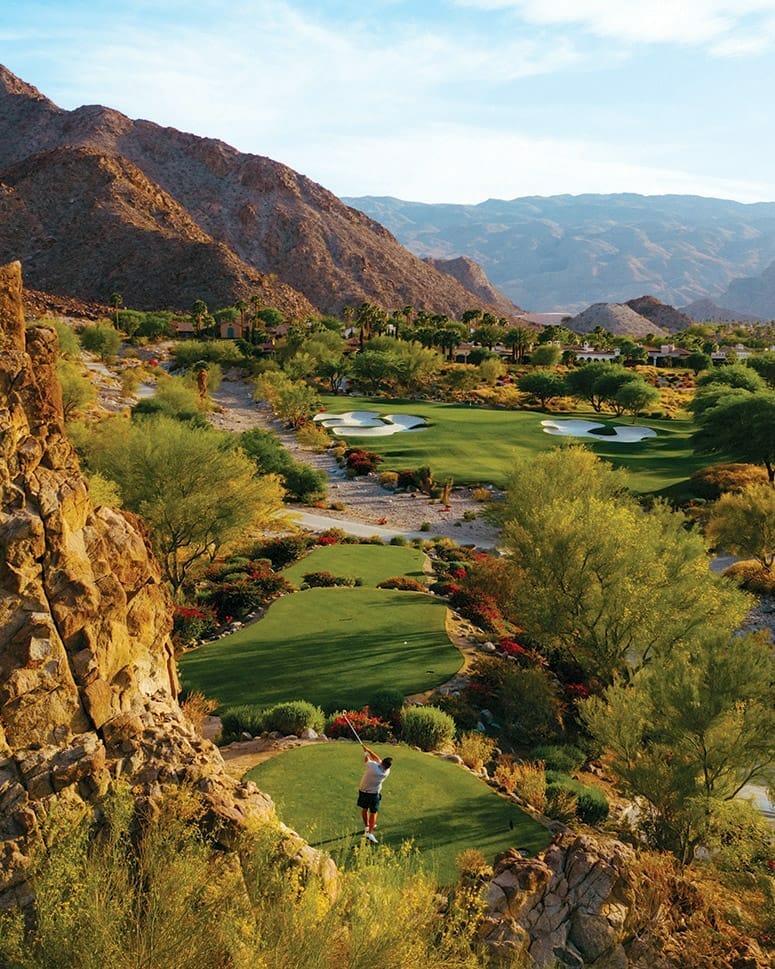 Overlooking the 11th hole from the Palmer tee.
PHOTOGRAPH BY COULDBETHEDAY

La Quinta history is rooted in Marshall’s contributions to the community. In fact, La Quinta Cove was once known as Marshall Cove and Washington Street — the very road that leads into Tradition — was originally Marshall Road.

The same scenic vistas which no doubt attracted early settlers enchant members who live and play here today. The 18-hole Championship Arnold Palmer-designed course accentuated by Augusta white sand bunkers and secret hidden tees is every golfer’s dream. Additionally, the 9-hole short course and practice range sit behind the only desert residence “The King” called home. These golf facilities are accented by the charm of the 1920s buildings and century old gardens of the original homestead.

Statue of Arnold Palmer, only one of three sanctioned, was unveiled in 2018.
PHOTOGRAPH BY COULDBETHEDAY

The Marshall family established a working ranch and initially lived in a modest cottage before building a larger home. The early Spanish Hacienda-style structures remain a central part of life at Tradition, lovingly preserved and still in use. After Marshall Ranch was sold to the prominent Rosecrans family in 1938, the cottage played host to a certain president which is why it is known as Eisenhower Cottage in present times. Meanwhile, the Rosecrans dubbed the handsome L-shaped main dwelling the “Hacienda del Gato” due to the heroics of one particular cat.

It is precisely this kind of history and lore that captures the imagination of many first- time visitors who pass through Tradition’s unmarked front gate. It appealed to Troy and Basia Gillespie, five-year members who arrived seeking a convivial atmosphere and more than found it at Tradition. “I was so impressed by the tall trees and beautiful foliage as we came up the drive. Plus, there’s a sense of calm that pervades,” says Basia. Fans of old-world style, the Gillespies appreciate Tradition’s fresh interpretation and masterful blending of bygone days and new. “You can definitely feel Arnold Palmer’s presence here, too,” says Troy.

Palmer memorabilia is on display throughout the Club not to mention an inspiring statue of the golf legend and working man’s hero which resides just outside the Clubhouse. Although the Gillespies were initially social members, they soon took up the sport and now Basia is apt to play four to five days a week.

Since 2017, Tradition has been distinguished as a Platinum Club of America, an honor bestowed upon just 50 golf clubs, only 3 of which are in Southern California. It was recognized by Golf World Magazine “as one of the prettiest in Palm Springs” and its 18th hole graced the fall 2021 cover of artfully inclined publication The Golfer’s Journal. 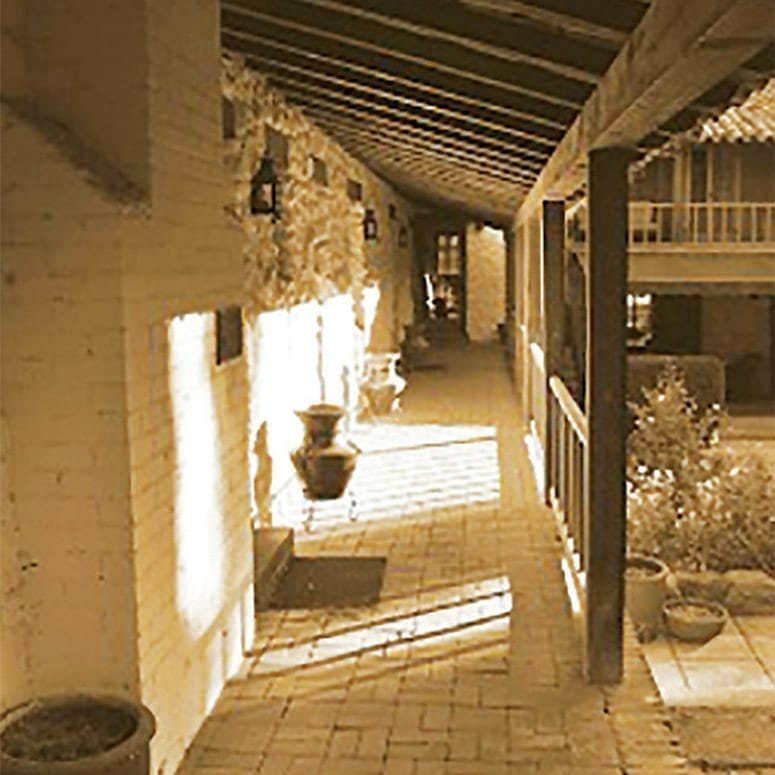 This land is something really wonderful. It bends and curves beautifully, set against the mountains, giving the golf course lots of drama.

Fully embracing its stunning mountain setting, Tradition has just 293 homesites all set a discreet distance from the course. The grounds are punctuated by the riotous color that only 10,000 flats of flowers planted each year can provide. The show-stopping floral display pays homage to Arnold’s first wife Winnie who hailed from Pennsylvania and was partial to East Coast gardens.

In 1954, the Rosecrans family sold the property to farmers James and Esther Holmes who cultivated a wide variety of citrus onsite for close to 20 years. Between 1972 and 1996, the land was owned by several developers including Fritz Burns and the Landmark Land Company. Through a somewhat circuitous route it came to be acquired by a Minnesota-based group of investors in 1996 and was ultimately turned over to John Hankinson and the Sienna Corporation in 1996 to develop the golf course and community that exists today. 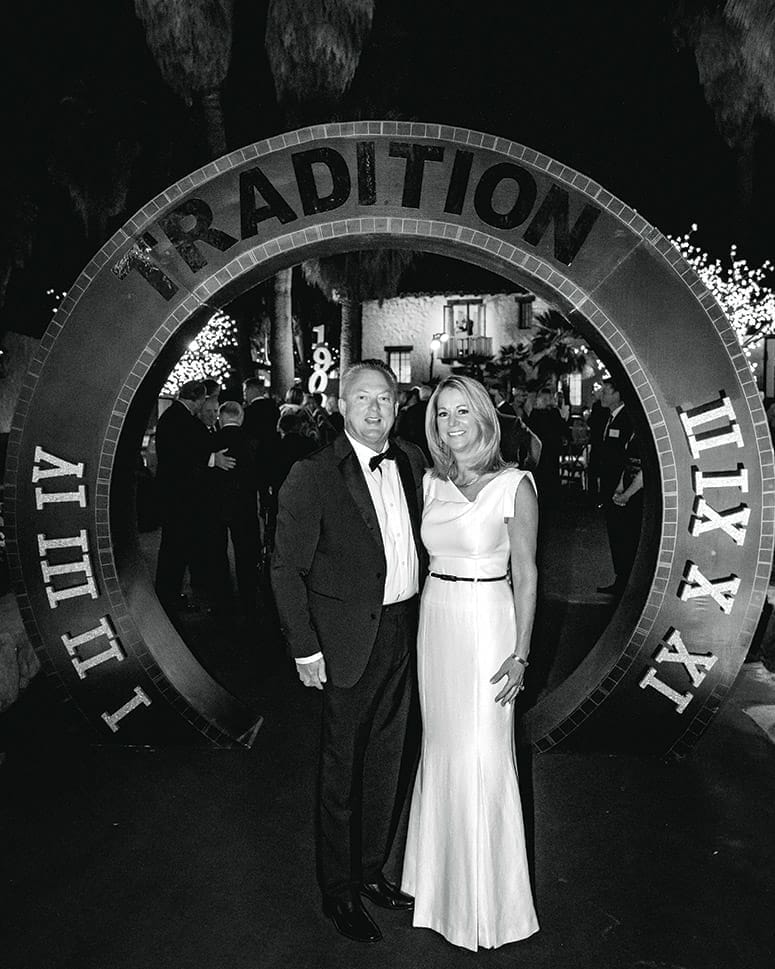 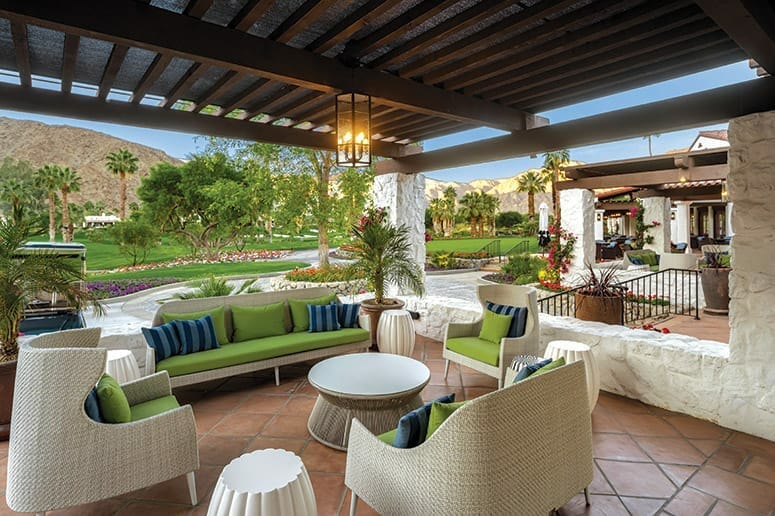 PHOTOGRAPH BY CHRIS MILLER / IMAGINE IMAGERY
“I toured the property in an SUV when it was mostly boulders and desert. It was soon evident that we had an amazing opportunity on our hands,” said Scott Egginton, who along with wife Gregg became one of those original investors and ultimately Tradition founding members. The couple, who were already vacation homeowners at another Valley golf club community, knew how wonderful it was to live close to the mountains and have beautiful views of the Santa Rosas each day.

"We quickly realized that a future golf course on the property could have a significant number of holes right along the mountains and that it would be simply incredible.” 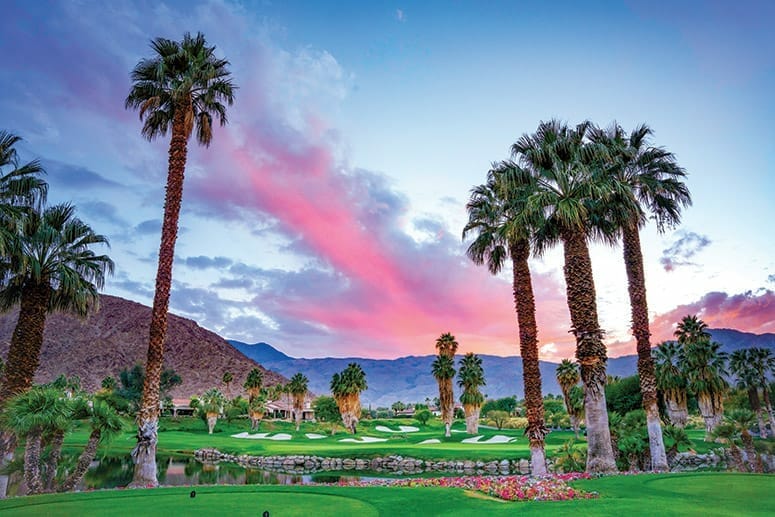 The 18th green from the Palmer tee on #1.
PHOTOGRAPH BY CHANNING BENJAMIN

Sienna Corporation’s purchase of the property from the investors had the wondrous good fortune of catching Arnold Palmer’s attention. While playing in countless desert tournaments, he’d long been aware of the stunning property at the end of Washington Street. He personally reached out to Mr. Hankinson to express interest in designing the planned golf course. After one meeting between the two, a handshake deal was struck, including Mr. Palmer’s agreement to ultimately be a member of the club and a homeowner. 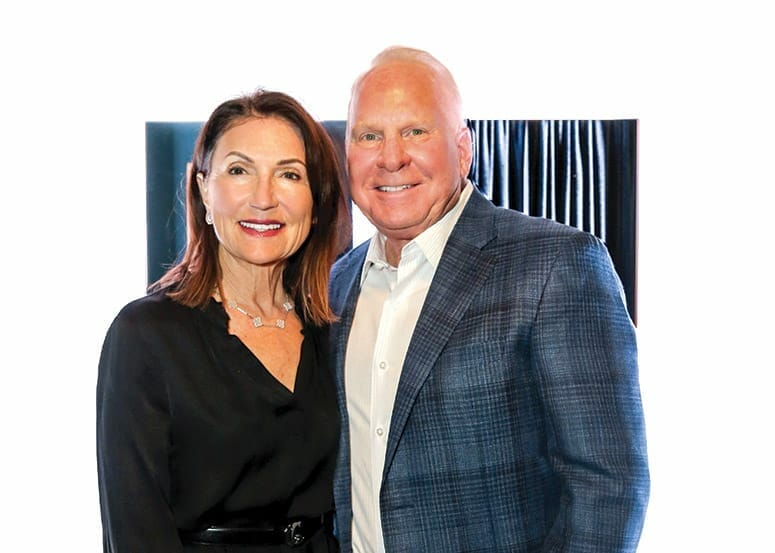 Gregg and Scott Egginton, one of Tradition’s founding members.

From the beginning, Arnold’s vision was to create a fun and playable golf course and embrace the ambiance and history of this spectacular property. His passion for the club and land was unmistakable and is infused into the fabric of what Tradition is today.

TRADITION IS SOMETHING TO BE SHARED WITH THOSE YOU LOVE — FRIENDS, FAMILY, AND NEIGHBORS. 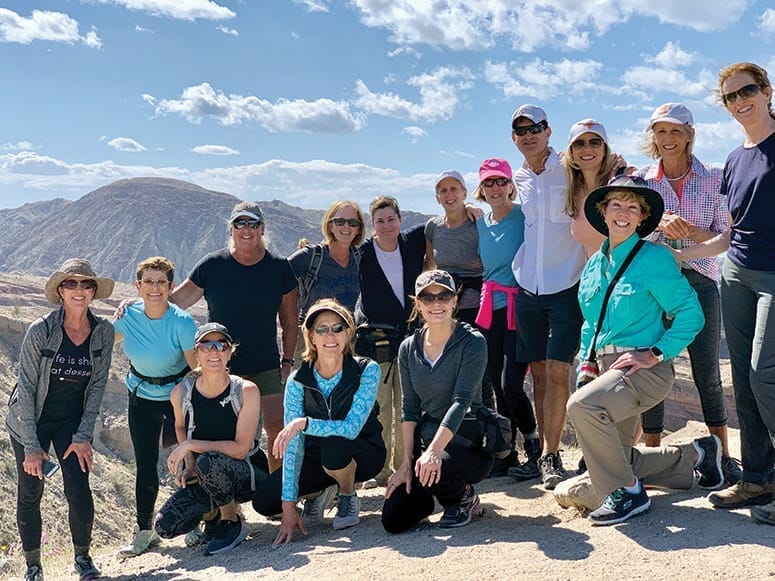 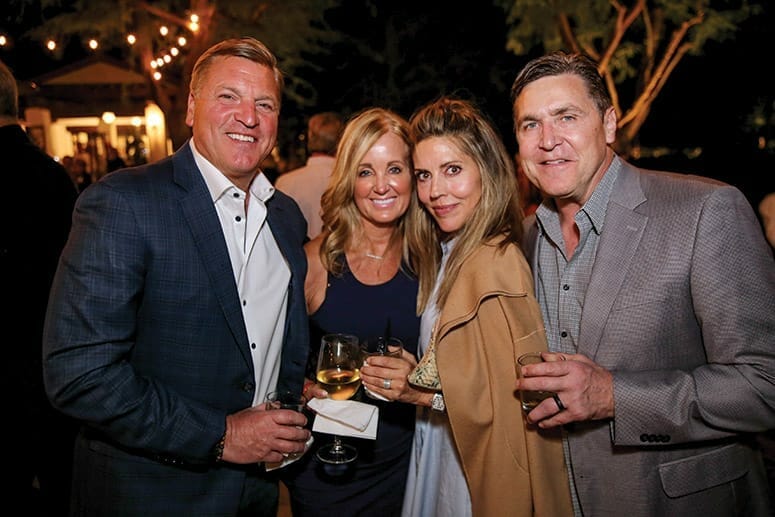 Capped at an intimate 210 golf members, members of all ages and stages mingle as if they’ve known each other a lifetime. A recent $7 million clubhouse renovation enhanced the clubhouse and patio spaces which feature swoon-worthy views. The remodel also created a modern tavern which has become a favorite casual dining and gathering spot and were instrumental in putting a proper roof on the Club’s terrace, the site of many meetings and events.

Prospective members, who are inspired to become part of an intimate community of friends, appreciate Tradition’s culture of warmth and understated elegance. Members enjoy an engaging active lifestyle in a setting surrounded by charm and character.

THE BIGGEST THING I LIKE ABOUT TRADITION IS THE PEOPLE. EVERYONE IS ALWAYS WARM AND SAYS HI. 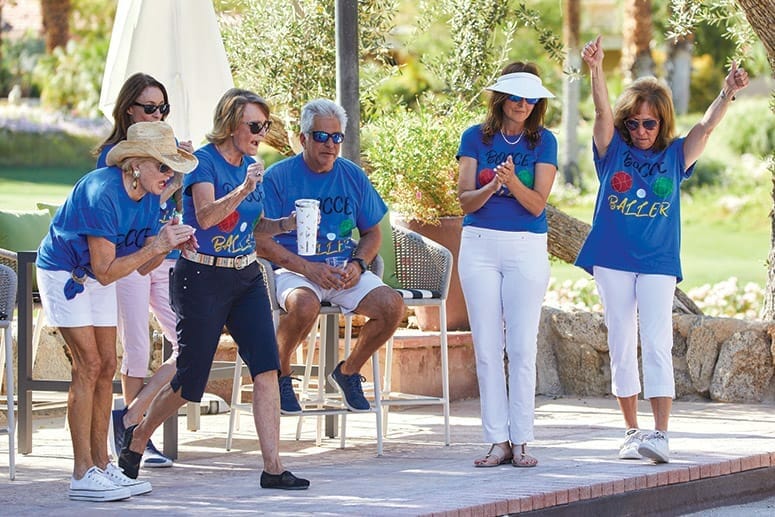 Ever cognizant of members’ developing interests and pursuits, Tradition leans into social programming which includes such offerings as children’s camps at Thanksgiving and Easter, organized bike rides, guided hikes, author-led book discussion groups, concerts and wellness lectures. Many of these are organized by the committed staff at the well-equipped Fitness Center & Spa, home to seasoned personal trainers, a wide range of fitness classes and of course, a host of restorative spa treatments. 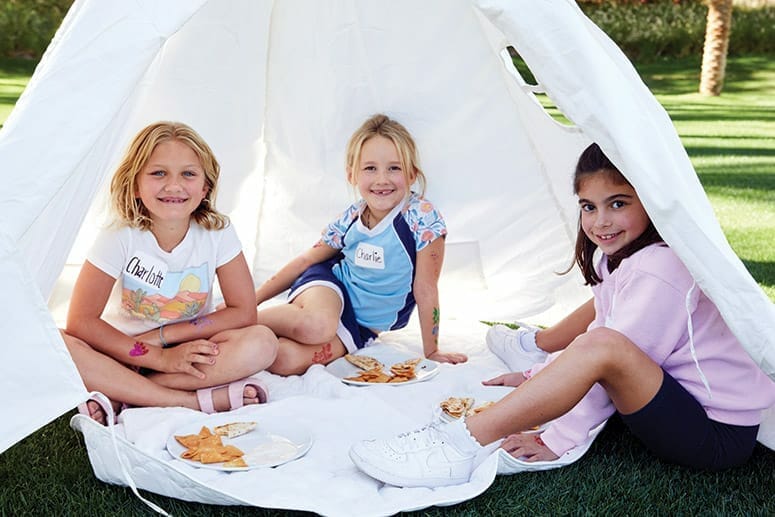 Holidays at Tradition are a special time for every generation. From kids camps to bocce ball, there is something for everyone.

Tradition’s raison d’être may be golf, but bocce ball has also taken the Club by storm. Many a moonlight night is spent in the company of other members who pursue the pastime with gusto in the shadow of the historic Hacienda del Gato. A pizza oven stands nearby serving up pizzas accompanied by wine, rounding out all the ingredients necessary for a perfect evening. At Tradition, opportunities to enjoy good food, good wine and good friends are plentiful.

Tradition Golf Club formerly transitioned from developer-owned to a Member- Owned Equity Club in 2008. Members will continue to be involved in providing their valuable input as Tradition looks to the next 25 years. 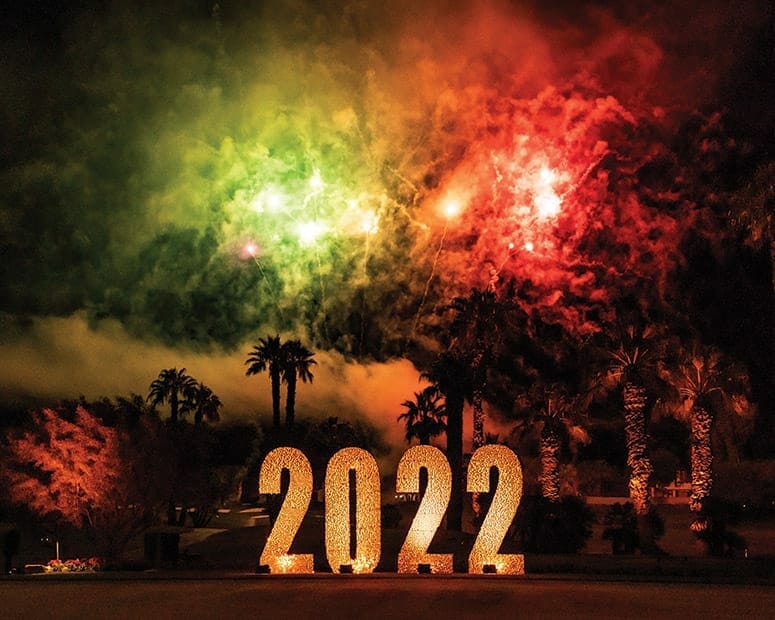 “At Tradition, we embrace the future while also holding true to the time-honored traditions of golf and all the things that make club life special,” concludes Kyle Draper, Tradition’s Chief Operating Officer and General Manager. “We honor our history and continue to incorporate it into everyday life in meaningful ways, but it will never serve to limit us as we plan our exciting roadmap into the future.”