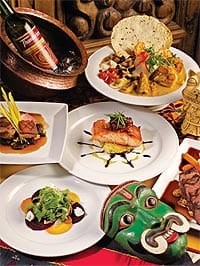 Desert chefs are the best, and the bountiful fresh produce and fish flown in daily allow them to create masterful menus with worldwide influences. Many have their own herb gardens and are passionate about using only the freshest ingredients. Trendy dishes scare some who want to eat only what they are used to, whether ethnic, regional, or whatever momma made so well. Innovative restaurateurs take note of trends and let their chefs experiment with adding new flavors to tried-and-true recipes and turning conventional fare in unconventional presentations.

The desert’s popular steakhouses — with premium prime beef and martinis — are the bastions of traditional fare, but all of them bring a little something different to the table. Joining steaks and chops are succulent seafood, rack of lamb, fresh side dishes, and innovative potatoes (Ruth’s Chris offers eight variations). LG’s Prime Steakhouse serves an exceptional Caesar salad made tableside. You can get a hot artichoke flower at The Steakhouse at the Spa Resort Casino and eclectic surprises at Prime 10 Steakhouse at Agua Caliente Casino. Try prosciutto-wrapped filet mignon with green pepper sauce at Fleming’s Prime Steakhouse & Wine Bar; slow-roasted prime rib at Black Angus Steakhouse; sea scallops wrapped in bacon with apricot chutney at Morton’s, The Steakhouse; and The Wedge, iceberg lettuce with citrus Roquefort dressing, at the Chop House restaurants. Sullivan’s Steakhouse has skillet steak mushroom caps, and herb-crusted prime rib slowly roasted in rock salt is a favorite at Players Steakhouse at Fantasy Springs Resort Casino. Kobe Japanese Steak House brings the dramatic and entertaining Japanese presentation of certified Angus beef to its teppan tables.

Traditional American food is served at Vicky’s of Santa Fe, with many menu items unchanged over the years — much to the delight of longtime clientele. But standbys such as center-cut prime rib steak and Colossal Onion Flower and now joined by chicken potpie. Cedar Creek Inn continues its tradition of favorite foods, with escargots on the menu for a French twist. Daily Grill is the epitome of American fare and trendy only with its extensive martini menu. And what could be more traditional than Arnold Palmer? His eponymous restaurant features his favorite comfort foods prepared in extraordinary fashion by former Ritz-Carlton chef Brett Maddock, who also prepares specials such as osso buco and pan-seared sea scallops with Southwestern relish and corn coulis.

Two restaurants that list their cuisine as American are far from traditional. The Café at The Lodge is presided over by French chef Frederic Nail. His ever-evolving innovations include roasted kurobuta pork loin and Bay Shrimp, Papaya, and Avocado Napoleon. Renowned owner/chef Jimmy Schmidt of the famed Detroit Rattlesnake and our Spotlight 29 Rattlesnake creates masterpieces such as pistachio-crusted rack of mountain meadows baby lamb with Syrah-berry jus.

Schmidt — who never fears taking a walk on the wild side — is a great proponent of umami, a taste receptor stimulated by amino acids that he learned about in 2002 when it was scientifically identified as the fifth taste receptor. Although referred to in writings for centuries, it was only recently considered a basic taste, joining the taste senses of sweet, bitter, salty, and sour. Umami 1s now an integrated part of Schmidt’s cooking style as he develops natural flavors, layers and entwining flavors, and supporting flavors by using umami-rich ingredients such as mushrooms, truffles, red meats, red wine, white wine or sake, peas, and asparagus. Together they create dishes that are richer and broader than individual ingredients. One of Schmidt’s umami-enhanced entrées, well received by his guests, is Spicecured, free-range Duck Breast and Foie Stack atop Pinot Noir risotto, Parmesean froth chile essence around it rather than mixed with the Risotto. Aerating the cheese with a spot of cream expands the flavor molecules and makes for an attractive as well as tasty dish. Visit www.the-fifth-taste.com for more information on this fascinating boon to the culinary arts.

The French experience in the desert keeps to the classic specialties of France, but with a flair for the edgy. Le Vallauris is a landmark French restaurant with excellent foie gras. Sister restaurant Le St. Germain has a Mediterranean-Continental approach. Try Steak Diane at Le Paon, duckling á l’orange at Café des Beaux-Arts, steamed black mussels at Pomme Frite, soup in a kettle at The Nest, quail stuffed with sweetbreads at Cuistot, and elegant Dover sole at Wally’s Desert Turtle.

Italian cuisine is a desert favorite, and Riccio’s is a mainstay with its epicurean Northern Italian menu that includes a wonderful cioppino. Castelli’s also has excellent Northern Italian selections, with Fettuccine Alfredo the house specialty. Ristorante Mamma Gina brings us the authentic flavors of Tuscany and Florence; Carpaccio Mamma Gina makes a tasty starter. Tuscany’s Ristorante at Desert Springs serves time-honored traditional fare of the Italian region for which it is named. Bellini is very Italian, but with eclectic touches such as Polenta Con Salsiccia. Massimo features several-generation family recipes with a sophisticated flair, and Devane’s is noted for its Veal Marsala. Mario’s Italian Café (there are two) and Mario’s Italian Restaurant are friendly, family restaurants with traditional favorites.

Trends have brought fun and new taste adventures to our restaurants. Some have been trendy all along, and some are newcomers adding a different twist to dining. St. James at The Vineyard has always been a trendsetter with an eclectic menu of recipes collected around the world; don’t miss the Bouillabaisse Burmese. Spencer’s Restaurant adds the latest trends to its American cuisine with European and Pacific Rim influences. Citron is on the cutting edge with its “California Modern” menu; try the Saffron Seafood Risotto. California Pizza Kitchen offers an innovative concept to pizza selections and chic variations on Italian entrées; try the Chipotle Chicken Pizza for a hot new taste.

Tommy Bahama’s island philosophy and tropical menu are a lovable trend and were an instant hit when the restaurant opened five years ago; try the Santiago Sea Bass. Inspired by the latest innovations gleaned from the East Coast and Europe by owners June and Jay Trubee, Jillian’s menu reflects these travels each season; try Nantucket Bay Scallops sautéed with Champagne lemon buerre blanc. Wildflower Grille at Rancho Las Palmas Marriott Resort & Spa has the trendy touch of Chef Miguel Morales, who is always researching the newest in food presentations; his Cedar Plank Salmon is a coup. Copley’s on Palm Canyon takes a traditional entrée and capriciously turns it into a stroke of brilliance, such as a delicate Char-Grilled Beef Filet with lobster mashed potatoes. Chef Andrew Copley’s herb garden is his secret weapon, along with his Hawaiian and San Francisco background.

The trendy Tastings provides a novel concept in dining — with small plates of gourmet fare served to diners on comfortable couches with plush pillows. The smaller portions give diners a chance to sample a variety of dishes — each paired with a suggested wine — for every taste.

Another trend, big on the East Coast and working its way west, is the use of salts in their purist form. Chef Eric Wadlund of AZUR at La Quinta Resort & Club has incorporated some of them in his menu, such as lime-smoked sea salt, finer grain kosher salt, and French sea salt. He notes another trend is deconstructed salads that have classic components but are not served in the traditional way, such as Caesar salad using only hearts of romaine. He also serves a shrimp appetizer using red tomato confit rather than cocktail sauce.

Fusion is ever fashionable, with chefs introducing Pacific Rim elements to traditional American menus and seafood. Chef Johannes Bacher was at the forefront of the fusion concept in the desert, bringing his around-the-world experiences to the cosmopolitan cuisine at Johannes with Austrian specialties such as Wiener Schnitzel and his mother’s apple strudel. Chef Roy Yamaguchi brought his famed Hawaiian fusion menu here with touches of Japanese and French cuisine, as well as Pacific Rim spices, to reflect the diversity at more than 30 Roy’s restaurants. And South Beach Restaurant & Nightclub features Caribbean entrées along with seafood specials, while Yard House presents awardwinning American fusion cuisine with Asian touches such as Korean Sweet Ribs.

Savvy restaurants also are exposing diners to more of their wine list by offering more wines by the glass — and finding their guests eager to experiment and pair new wines with their favorite foods.

We are privileged in the Coachella Valley to have so many diverse cuisines and wonderful restaurants. This space is too small to describe them all, but they include Brazilian, Chinese, Japanese, Thai, seafood, vegetarian, kosher, and spa cuisine — adventures in good eating all across the valley.