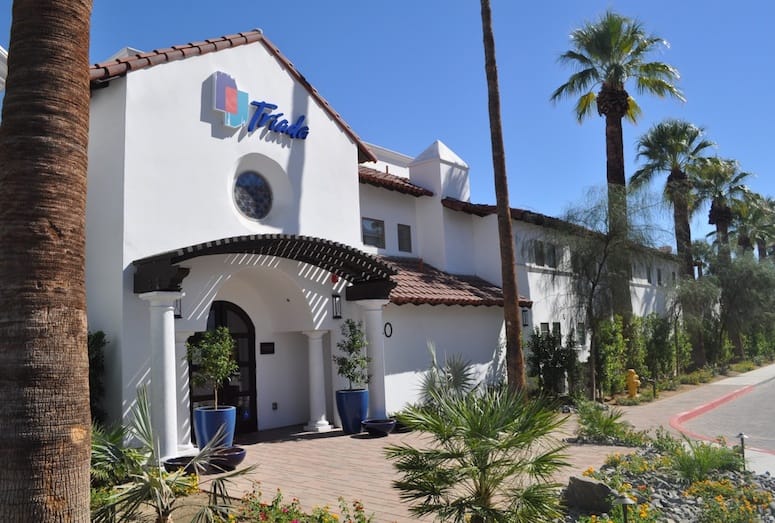 The Spanish Inn, once owned by the widow of Alan Ladd and favored by the likes of Elizabeth Taylor and Howard Hughes (who used to watch over his hotel, The Colony Palms, from his room), has been transformed into a 57-room retreat called Triada.

Triada, a Spanish word meaning “three interrelated parts”, is the perfect description of the hotel offering three unique wings. The wings have been named after the Triada signature colors:

• Alma – a teal that represents the soul

• Corazon – a burnt orange for the heart

• Mente – a navy blue for the mind The Spanish Inn once attracted some of the biggest Hollywood stars.

Built in 1939 by David and Beulah Margolius, The Spanish Inn’s design took after the duo’s love for Barcelona. Over the next couple of decades, the hotel entertained such stars as Tyrone Power, Lana Turner, Jimmy Durante, Esther Williams and opera star Amelita Galli-Curci.

Triada is a part of the Autograph Collection (a group of unique, independent hotels) by Marriott offering points and benefits to Marriott Reward members. The opening will mark the first Autograph Collection hotel in the Coachella Valley and only the third in California, with the others in Lake Arrowhead and Imperial Beach.

Read her other posts:

Hotel Kitchenettes Exude That Home Away From Home Feel

5 Tips to Ensure a Great Hotel Experience…From a Hotelier