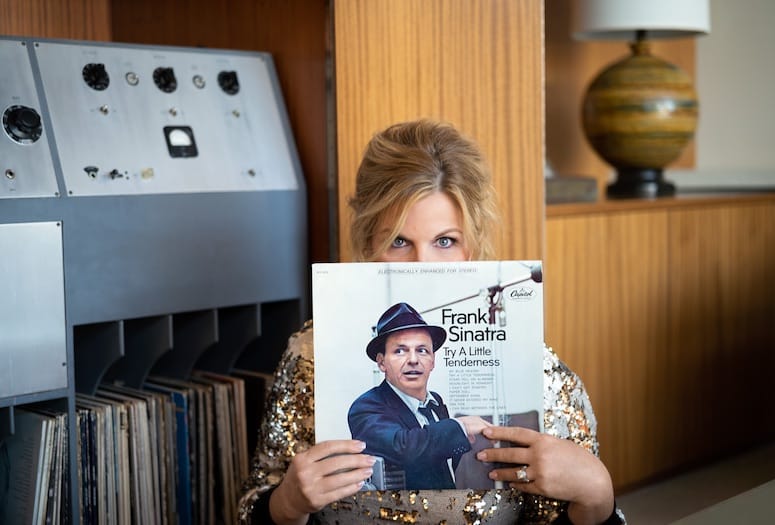 Not many performers can embody the grace and soulful bravura of Frank Sinatra, but Trisha Yearwood sure knocks it out of the park.

In Let’s Be Frank, Yearwood’s first solo album in almost 12 years, the Grammy Award–winning country music superstar handpicked favorite Sinatra staples and cut the tracks in only four days at Capitol Records in Hollywood. With backing from a 55-piece orchestra, she sang into the Chairman of the Board’s microphone and breathed new life into one of history’s most treasured song catalogs.

“I was in L.A. for a total of eight days, and it was over before I wanted it to be,” Yearwood says of the recording experience. But her Frank-fueled journey didn’t end in the sound booth. “When I was offered to do a private show [at the McCallum Theatre] in Palm Desert, I thought, How far is that from Sinatra’s house?”

Not very far. Yearwood suddenly found herself at the Rat Packer’s iconic Twin Palms Estate in Palm Springs shooting a music video and series of portraits.

Let’s Be Frank saw a limited release in December and is available everywhere as of Feb. 15. The 12-track album includes some of Sinatra’s most dazzling hits, including “All the Way,” “Come Fly With Me,” “The Lady Is a Tramp,” and “One for My Baby (and One More for the Road).”

But the final track on the album is an added bonus — an original duet featuring Yearwood’s hubby, fellow country music star Garth Brooks. She says the song, “For the Last Time,” feels as if it could have been written and performed in the 1950s or ’60s, during Sinatra’s heyday.

Yearwood has been busy over the last decade, particularly with her Emmy-winning Food Network series, Trisha’s Southern Kitchen, and a slew of entrepreneurial endeavors. We caught up with the songstress to find out how it felt to channel Sinatra, how she stays grounded, and why she’s so enthralled with midcentury entertainment.

How did it feel to step into Frank Sinatra’s material, both figuratively and literally with shooting a music video at his estate?

It is such an iconic house. You’ve seen it, or maybe you’ve read about the parties there. I thought, “Wouldn’t it be cool if we could take pictures there?” And it worked out. So to be in the house and feel that whole ’60s vibe — I believe in “vibes,” spirits in the walls and such — was wonderful. I thought, We can’t be in Palm Springs and not go to Frank’s house. 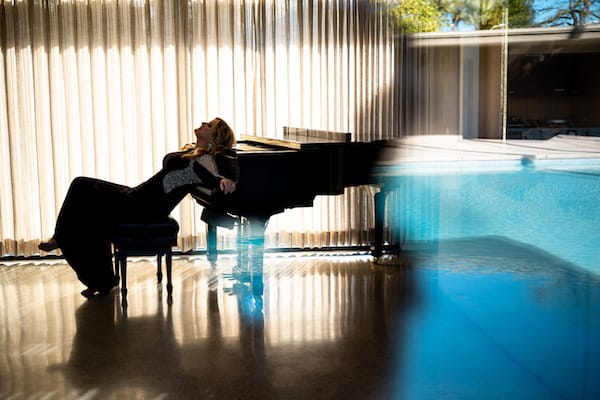 Sometimes you can sense the presence of what was or what lingers on. That must have been a thrill.

Right. And we recorded the album in his iconic studio, where so many artists recorded [Studio A at Capitol Records]. I stood at the same microphone he stood at and sat on the same barstool with pictures of Frank behind me. And then you walk down the hall and see pictures of Dean Martin and Judy Garland and Bob Dylan and you’re thinking, How am I here? Do they understand that I am going to be singing here and are they OK with this?

You grew up loving classic films of Sinatra’s era like Gentlemen Prefer Blondes and Pal Joey. What intrigued you most about them?

My mom, who was born in 1937, just loved those movies and that music. As a kid, my sister and I were exposed to it, and I don’t know if I would have been exposed to all of that if it weren’t for my mother. The gorgeous costumes. The way that the men were so dapper. It was glamorous. Everything about old Hollywood is so wonderful.

And how about the songs of that era?

There were just a handful of writers at the time writing these incredible songs that became the American Songbook. They’re timeless. In singing these songs now, it was a different experience for me than just knowing them my whole life. Wrapping my voice around the lyrics. There are so many little details — rhyme, comedy, wit, and intelligence.

What do you most appreciate about Sinatra?

He was larger than life. I walked away from this project realiz[ing] what a master interpreter he was. He would take the lyrics of a song and study them. He would read it like a story or a poem. I do that when I make a country record. That was one thing that made sense to me — I become that character in that song for about three minutes. When you read the lyrics and study them, if affects where you phrase, where you pause. Frank was the master at that. I listen to Frank sing “One for My Baby (and One More for the Road),” and it’s a conversation. He’s having a conversation with you. That’s a gift.

You and your husband, Garth Brooks, collaborated on an original song for this, too.

It was not written for the project initially. I had come home with a title. I live with a Hall of Fame songwriter [laughs], so … I’m not like, “Hey, let’s write this.” I’m not usually that girl. But I had this title, and I told him about it. I thought it was about us. “For the Last Time” sounded like a throwback. When we finished the song we weren’t sure what to do with it. It wasn’t a country record. It wasn’t for Broadway. 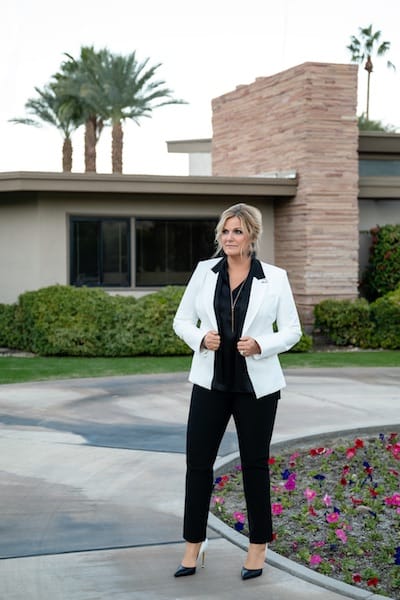 “We can’t be in Palm Springs and not go to Frank’s house.”

So it found its way to this album?

When the Sinatra project began to take shape, Garth really encouraged me to play the song for [producer] Don Was. I was nervous, too. You don’t want anybody to think that you were trying to say that something you wrote could stand up next to these iconic songs. At the same time, when you hear the song, you think it could be written at that time. Don loved it, and with his encouragement, we put it on the record. What it does for me is remind me that these songs, even though they’ve been written a long time ago, still have contemporary meaning.

Sinatra seemed grounded. How do you handle success or fame?

Everything is attributed to the way I was raised. My mom and dad wanted great things for us. But they also treated us all the same. Even when I had No. 1 records and people would ask about “your famous daughter,” my mom would say, “Which one?” You were expected to pull your weight. You weren’t getting out of your responsibility because you had a No. 1 record. I still cracked the ice cubes and filled the ice cube trays when I went home for Christmas. There’s a grounding that comes with that, and it stays with you. Their voices are still in my head. I don’t always heed them, but I wish that I did. They were grounded and madly in love and married for 45 years. They’re gone now. But I feel them with me still. I follow their example.

What do you love most about singing and performing?

It’s very selfish, honestly. You find that thing in your life that gives you joy and — you know, there’s nothing ever, ever negative about singing for me. I felt that way since I was 5 years old. It’s pure bliss. It’s the one thing that I do that I love to do. I feel lucky that I have something in my life that I am that passionate about.

Trisha Yearwood’s Let’s Be Frank is available wherever records are sold and/or streamed. Keep track of Yearwood at trishayearwood.com or @trishayearwood.