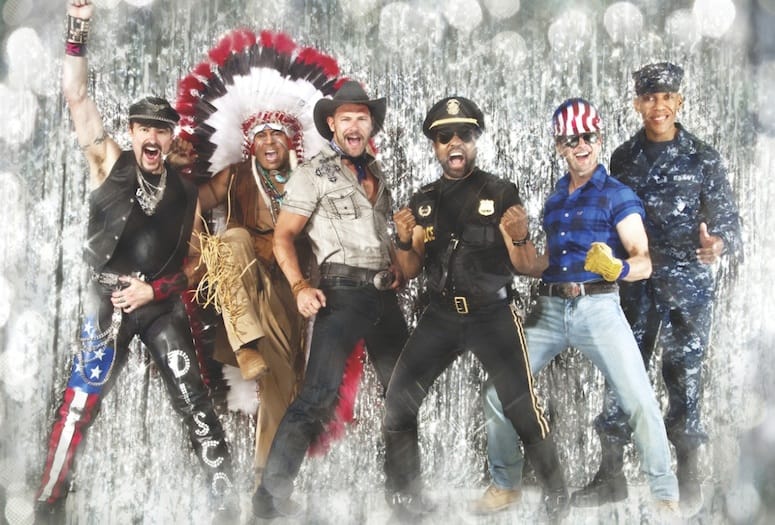 Don't expect people to stay in their seats for long during the 23rd annual Evening Under the Stars gala on April 30 at the O’Donnell Golf Club in Palm Springs.

The AIDS Assistance Program – Food Samaritans gala will likely have attendees taking to the dance floor when Village People, the Kings of Disco, take the stage as the featured entertainment.

“This is a great charity, and we’re really excited about it. And it’s going to be really beautiful out on that golf course,” says Village People cofounding member Felipe Rose about the event and AAP, which seeks to provide nutritional support for low-income community members living with HIV, AIDS, and other chronic illnesses. “You should come and have a good time because, listen — life is too short, and we are going to entertain you. We’re hoping to find a cure, and we’ll be there to inspire all the people attending who are doing something that’s worthy of our celebration.”

After returning from a recent Village People performance in Paris, Rose — a Native American who’s the Indian chief in the group — spoke with Palm Springs Life about honoring his heritage, his favorite song to perform, and what it’s like to wear that big headdress onstage. photo courtesy of the village people

Village People perform in 2008 at the Sun Bowl.

AAP does amazing work, and so do Village People when it comes to supporting AIDS charities.
“We still haven’t found a cure for AIDS or for cancer, so we need to keep doing it. It would be nice someday when we wouldn’t have to do anything like this, you know?

“With this younger generation of gay men, I say it straight with no chaser. I am very outspoken about it. I tell these young boys, ‘You know, you guys are crazy! You’re still playing with a loaded gun, thinking you can have unprotected sex because you’re young and invincible. You need the protective liner.’ It freaks me out how irresponsible many of these young men are.”

Hopefully they’ll get your message. When did you first Go West, to borrow a song title?
“We went to Los Angeles to do our first Dick Clark's American Bandstand [in 1978, for an AB episode that aired on January 6, 1979]. The group was in its infancy, and we did Macho Man [and San Francisco] — and it was a trainwreck! There were eight people in the group then, and the producers went, ‘OK, get rid of that one, and get rid of that one…’ They whittled it down to six guys. Me, being the catalyst of how the group was put together, I said, ‘OK, you can’t get rid of me! I’m part American Indian. I walk with my tribe and with who I am, and I’ll take that with me.’ And they went, ‘No no no — you’re staying!’” (chuckles)

Good thing, because you’re also the Shadow Walker, after all. [Shadow Walker is an Indian term used to describe someone who walks in two different worlds.]
“Oh my God, thank you for saying that! I literally think and walk in two worlds; I do. I sage in my alabaster bolo in my house, every other day when I’m home with the eagle feather that my dad sent me. [Sage is an ancient ritual that includes the burning of herbs as a cleansing method.] I do that to cleanse and clean myself, and my house, and I also say prayers for my friends or family members who are not well. I try to keep my spirituality in balance and effect, and at the same time, remain grounded. I’m a lover and a tree-hugger, not a fighter.”

I think it’s fair to say Village People are pioneers. Would you agree with that statement?
“I would say so! We’re pioneers in a lot of different ways. We just got back from Paris, where the interviewers were asking about our involvement in the activism for the LGBT movement. It’s not like we started out saying, ‘Oh, we’re going to be a band about LGBT causes,’ because back then, that didn’t exist.

“We were put together by French producers [Jacques Morali and Henri Belolo]. One of them happened to be gay [Morali], and he wanted to celebrate that lifestyle. It’s interesting — I never thought that I or the group would be in this position. We are a pop band that sings songs that celebrate the LGBT community. But we love all of our audiences; let’s not get that all twisted up.”

Exactly. Everybody can enjoy Village People music, no matter what your orientation is.
“The beauty about the group is that not everybody in it is gay. Both individually and together, we bring something to the table. We bring such a great joy to it. All we do is laugh. I have a six-pack from laughing so hard, because that’s literally all we do!”

Now that’s a workout I can get into!
(laughs) “It’s just ridiculous! We do it even when we’re tired. But we leave each other alone when we travel. We all sit in different rows, and we don’t stay on the same floor in the hotel. When we do get together and go to the show, we’re in the dressing room all high-energy and laughing. When we go out onstage, all that love comes back to us.”

Is it hard to say what your favorite song to perform is?
“Macho Man. That wasn’t actually the first hit — San Francisco (You’ve Got Me) was [in 1977], and it was on the dance chart for something like 36 weeks — but it’s Macho Man, because of its lyrics and how strong the song is. It talks about empowerment, being positive, and being centered as a man with strength and confidence. It’s a good song.”

You can’t go wrong with Macho Man, Y.M.C.A., and In the Navy as a triple threat in your live set.
“And then we have the other in-between hits that were big around the world, like Go West and Can’t Stop the Music. The nice thing is, people have their favorites. What we love about the show is, for people who have never, ever seen us or saw us a long time ago, were invited because of other friends, or are longtime fans, we give them a glimpse of what it feels like listening to that music while taking you back to the era of disco. That’s us!”

Did you naturally gravitate toward playing percussion when you first got into performing? You started out wearing sleigh bells on you as you danced.
“That’s more about tradition. When many Native Americans go to pow-wows, they wore sleigh bells so you could hear the rhythm. I was a dancer first, then a singer, then an actor. You combine all three, and if you can blend them all together — well, talent speaks for itself, and longevity.”

Does that headdress you wear onstage ever get heavy?
“It does. I’m actually not wearing it at some shows anymore. It’s a showstopper for Y.M.C.A. when I come back out with it on, but it’s just too heavy and it falls down a lot in front of my face, and I have to push it back.

“I’m also being more respectful to many tribes and the elders, to not disrespect the ceremonial headdress. I’m conscious of using it now on special occasions. But I will definitely have it on for this show coming up.”

You’ve also donated some of those headdresses to various programs over the years.
“I’ve donated many of them for silent auctions, for charity. I have to stipulate with a letter and a clause for whoever bids the highest to not put it on during the party or the silent auction. The last time, people were putting it on and passing it around the dance floor, and I got in trouble. So I’m very conscious that it’s a symbolic piece of regalia that should be honored, and not disrespected.”

If Jacques and Henri hadn’t seen you dancing in that New York club back in the ’70s, do you think any of this would have even happened?
“I don’t know. I don’t think about things like that. I’m sure something would have happened. It’s hard to say. You always get the question, ‘How would you like to be remembered?’ Be remembered? OK, well, where am I going? My grandmother, we just lost her at 102 years. And my dad kids around with me: ‘Our people live long, so you may have to stick around with the group until you’re 80!’ (laughs)

“Now it looks like we’re in that kind of statesmen situation where we are being sought after to help, to motivate, and to inspire. It’s nice that people are looking towards the group for not just ‘the party,’ you know what I mean?”