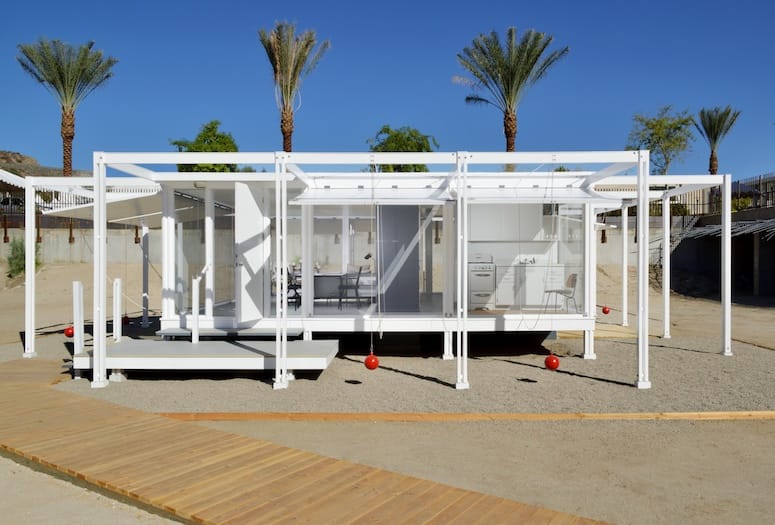 What is another name for the Walker Guest House? Find out in our 10 things to notice list.
PHOTOGRAPH BY DAN CHAVKIN

With the original home in private ownership, the Sarasota Architectural Foundation wanted to ensure this seminal example of indoor-outdoor living would be preserved and made accessible to visitors. They commissioned a replica, built in 2015 by Florida-based architect and author Joe King. It was installed on the grounds of the Ringling Museum as a temporary work of art.

The Walker Guest House sits between the Kimpton Rowan Hotel and the Palm Springs Art Museum. Take the elevator or stairs down from the parking lot west of the Kimpton Rowan. If the lot is full, there’s free parking along North Museum Drive and West Tahquitz Canyon Way.

The house is open on weekends until the end of May, then by appointment throughout the summer. Check psmodcom.org for times and details. Tickets are $10 per person.

Supported by Palm Springs Life, Grit Development, and other sponsors, the Palm Springs Modern Committee brought the replica to the Coachella Valley last year. It’s tucked into a below-ground open space behind the Kimpton Rowan Palm Springs Hotel and will be on display until March 2020.

While the home took on plenty of traffic during Modernism Week Fall Preview and February’s Modernism Week, visitors can still tour the home where they can observe Rudolph’s inventiveness in applying modernist style to warm-weather living. As a bonus, tickets include an up-close view of the massive “Babies” created by Czech sculptor David Cerný. (Tip: the “Babies” are made of black fiberglass, which gets hot in the summer. Take pictures, but don’t touch.)

To learn more about Paul Rudolph and the Walker Guest House, click HERE.

As you take your tour, here are 10 things to pay attention to.

The shades, or “flaps,” can be raised to create outdoor living areas or lowered for privacy. They are a key element of Rudolph’s design. The Walker Guest House was one of his first commissions after leaving the architectural firm of Ralph Twitchell, and launching his own practice. This concept of a “pavilion house,” drawing on Arabian tents and primitive huts, would become a signature form. In Paul Rudolph: The Florida Houses, King writes, “By adjusting the flaps, the building and its space came into motion, and for Rudolph this could engender a rich perceptual and even emotional experience. He called this the psychology of space.”

Rudolph served in the Navy during World War II, and the influence can be seen in several aspects. Ingenious counterweights balance the flaps and give the home one of its nicknames — the Cannonball House. Bright red iron balls, each weighing 77 pounds, provide visual pop while being functional. In a 2015 interview with the Sarasota Observer, King said the counterweights were the most challenging piece of the replica, and it took three tries to get them right. Inside the home, look for metal cleats, rigging, and battleship-grey floors 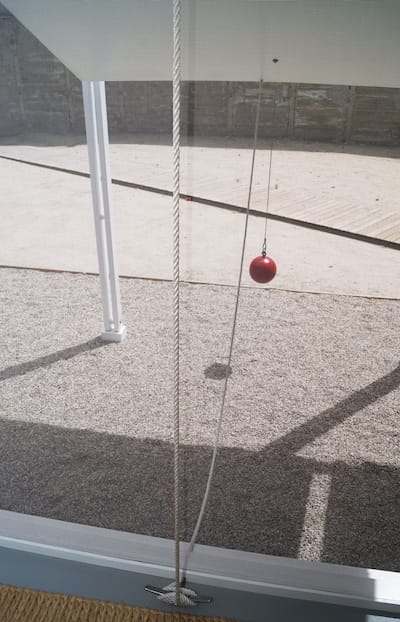 Ingenious counterweights balance the flaps and give the home one of its nicknames — the Cannonball House.

No, not an unwanted pest. The Walker Guest House is also called the Spider House. Viewed from outside, the white posts and beams have a distinctly arachnid feel. Rudolph said the house “crouches like a spider in the sand.”

4. Use of everyday materials

Although Walker could have afforded extravagance — he was the grandson of a lumber baron — Rudolph chose to use common materials he had encountered while in the Navy, including plastics, plywood, and readily available wooden posts, as a means of questioning assumptions in modern architecture.

A screen door comes as no surprise, but Rudolph used micro-screens as windows, interspersed with glass, on all four sides of the house for maximum ventilation.

In the former bedroom, now set up as an office, a video monitor plays clips from an interview with Walter Walker’s widow, Elaine. She describes her first impressions — “This is a house?” — and how they raised and lowered the flaps using the pulley-and-rope system. “It took two of us,” she recalls. “I would go in the back and push with my fanny.” 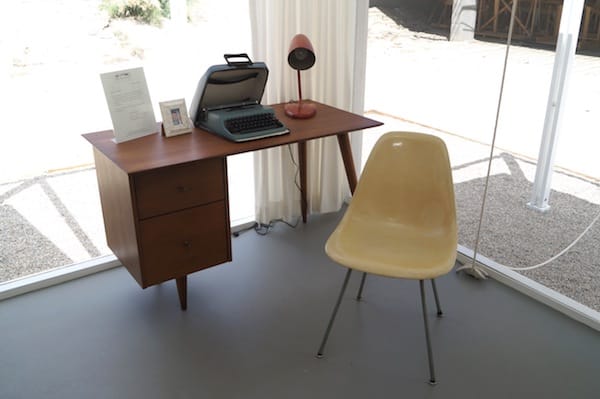 Ready at the typewriter for the office at the Walkr Guest House.

The Walker Guest House is considered Rudolph’s tribute to and critique of the glass and steel Farnsworth House designed by Ludwig Mies van der Rohe between 1945 and 1951. In addition to that icon of International Style, look for references to the architectural vernacular of the South, where families gather on breezy, wraparound porches and homes are designed to withstand hurricanes.

For the original home, Rudolph designed a dining table, daybed, and bookcase, which were reproduced for the replica by the original Sarasota furniture maker. The replica also incorporates contemporary pieces, such as a painting by Los Angeles artist Christopher Di Vincente in the living room, on loan from Flow Modern Gallery in Palm Springs. In the kitchen, appliances were identified by early photos, then sourced from vintage shops, eBay, and preservationists. Peek inside the O’Keefe & Merritt oven. You’ll find a cooking guide covering everything from angel food cake to a standing rib roast. 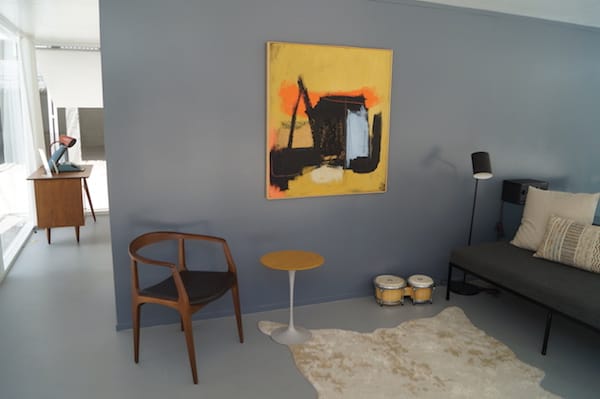 Throughout the home, look for photos and illustrations showing how the house was furnished in the 1950s. Can you tell where the Walkers hung their clothes?

Rudolph employed elegant geometry in the posts, beams, and windows. How many squares can you spot? Don’t forget to include the house itself and the outdoor areas.