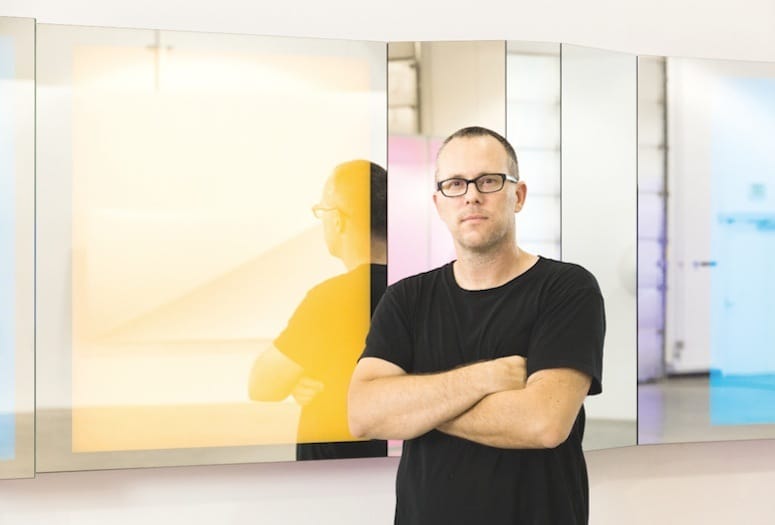 Through the panoramic windows on the second floor of his studio in Palm Desert, artist Phillip K. Smith III can see the Chocolate Mountains transform throughout the day from purple to brown to tan to red to orange. They also appear to change from two to three dimensions.

“Being surrounded every day by light phenomena is absolutely inspiring,” he says, standing in front of his 3-by-10-foot Crease, a white fiberglass wall relief whose surface shifts from concave to convex. “It’s all about the subtlety of light and shadow moving across the surface. Its appearance constantly changes with the light, whether it’s lit directly or with available, ambient light.” Smith scores, or creases, the white-painted Fiberglas Faceted Discs in geometric fashion. Viewed directly, they appear as perfect circles. From the slightest of angles, they reveal their three-dimensionality and appear to push off from the wall.

“The idea of interacting with light and the sun is at the root of the first pieces I was making,” says Smith, who grew up in Indio and earned degrees in art and architecture from the Rhode Island School of Design. Smith’s work advances the innovations of the Light and Space pioneers of the late 1960s and ’70s, particularly James Turrell and Robert Irwin. “I started to create forms that were interacting and changing throughout the day so that your experience at sunrise and at 9 a.m. and noon and 3 p.m. were all different. It was always the same form, but the surface was revealing different things throughout the day.”

While available light drives his “Light + Shadow” works, Smith is best known for his “Lightworks,” particularly Lucid Stead — a homestead shack near Joshua Tree that he reimagined with alternating wooden and mirrored beams around the structure and multicolored LED lights in the windows — and his large-scale light installation Reflection Field, commissioned by Goldenvoice for the international music juggernaut known as Coachella Valley Music and Arts Festival. The installation consisted of four mirrored squares and a two-story-tall rectangle that reflected the environment by day and glowed with color-progressing LEDs at night.

Back in the studio, this dichotomy manifests in the installation of the minimalist and monochromatic Crease across from the light-based Bent Parallel, which is about immersion in color.

“If you step up close and look straight forward at yourself and the world around you, you are immersed in that color beyond your periphery,” Smith says. “If you hang out here long enough, there’s a moment when your brain begins to question which side you’re on. You know that world: It’s right behind you — or is it in front of you? This kind of immersion is something that I’m very interested in.”