Who Should Say the Vows at Your Wedding Ceremony? 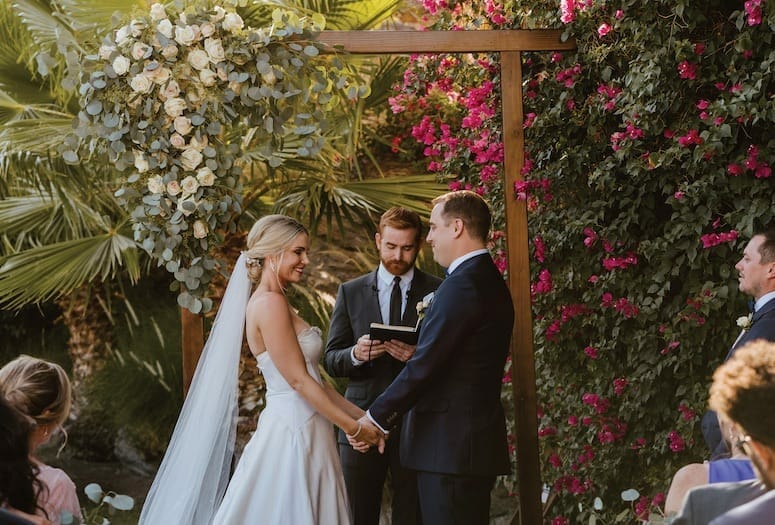 If, like Shelby and Sean, you fancy being married by someone who’s stood by your relationship since the start, you’re in luck. For a nominal fee, anyone can be ordained online in a matter of minutes. In addition to marriage license paperwork, in California, there are only two requirements to make your ceremony official: a declaration of intent (your “I do’s”) and a pronouncement (“I now pronounce you partners for life”). The rest — readings, songs, unity rituals, vows — is entirely up to you.

After two postponements, an informal ceremony with a justice of the peace, and a baby, Shelby and Sean finally tied the knot the way they originally intended to at The O’Donnell House in Palm Springs. Comedian Andrew Santino officiated. “Andrew has been one of Sean’s best friends for the last 13 years, and he and his wife are a big part of our life,” Shelby says. “They have seen us from the very beginning of our relationship, so that meant a lot to us to have someone who witnessed our loving blossoming. He’s also a stand-up comedian, so we knew he would be comfortable speaking.”

No matter who your officiant is, communicate your vision and provide parameters and/or a script. “Originally, we gave Andrew a script and told him he could add some of his own color at the very beginning,” Shelby says. “We ended up letting Andrew be looser with the script, and he did an amazing job.”

In the event your BFF isn’t a stand-up, Santino offers some basic advice to pass along to your officiant.

Find your flow: “Focus on what [you’re] there to do,- see [your friends] get married. I opened talking about their relationship and how I’ve seen it grow, with a few jokes sprinkled in. And to end, I got out of the way and let their vows and first kiss steal the show.”

Keep it short: “If you think it’s too long, it probably is. Keep it to the point and remember why everyone is there, to see people get married and [for] the free food and booze.”

If all else fails: “A shot of whiskey usually helps.” 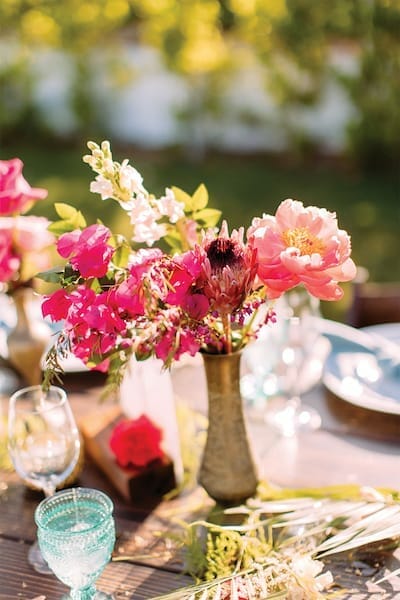 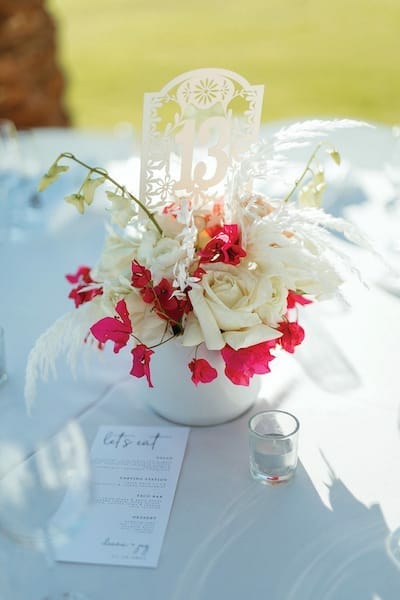 Whether as flower filler or a full-on bouquet, bougainvillea makes it easy to add color to your floral display. Said to represent passion and liveliness, this brightly hued vine plant grows in abundance in the Coachella Valley. (Rub elbows with the locals, and you might just secure your centerpieces for free.)

The most common variety is magenta, but you’ll also find bougainvillea with soft pink, yellow, orange, purple, and even white blooms. Use a sprig or two to add visual interest to a simple arrangement, tie it to the chairs lining your ceremony aisle, give a basket of clippings to your flower child, or fashion it into a whimsical frame for your sweetheart table.

Just be mindful of the thorns. If your venue has bougainvillea growing on property, you have a built-in photo backdrop — insert a few dried flower stems to jazz up the natural aesthetic.