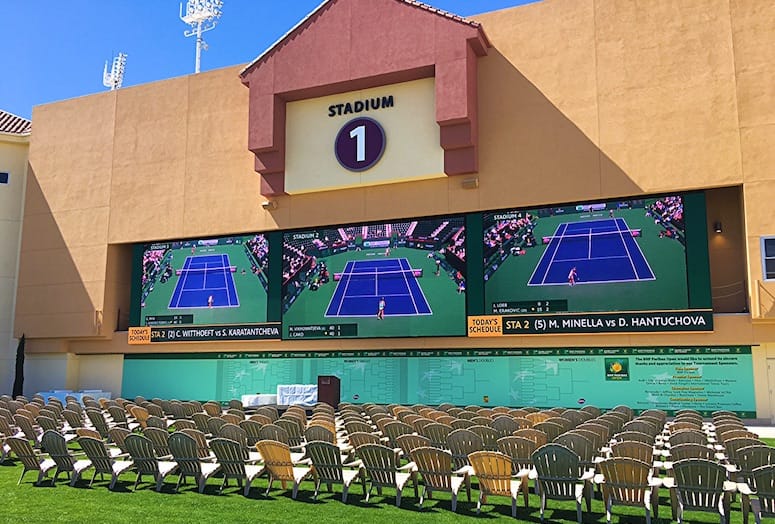 The big-screen TVs that adorn the Stadium One Plaza wall are now a permanent fixture for fans to watch up to five matches at once.
PHOTO BY ERIN PETERS

It won’t take long to see the changes at the BNP Paribas Open this year at the Indian Wells Tennis Garden.

You can even taste the difference to the tune of 21 restaurants, ranging from Nobu to Wolfgang Puck’s 100-seat Spago Restaurant overlooking Stadium One.

Stadium One Plaza still offers a place to sit and watch the ongoing tennis matches on a grassy green area, but the big-screen TVs are now permanent fixtures on the wall instead of being brought in for the event. You can watch up to five matches at once.

The 44 VIP suites have been upgraded, now with their own private restroom and a high-tech toilet. Speaking of restrooms, they are now part of the upper bowl area where there were none previously.

And that’s only scratching the surface. Stay with Palm Springs LIfe as this week we give you a closer look at the restaurant offerings, check out the hot trends in tennis fashion, and take you to the practice courts where fans have an unprecedented closeup view of their favorite players in action.

VIDEO: Philippe Dore, media/marketing director for the BNP Paribas Open and the Indian Wells Tennis Garden, explains to Palm Springs Life correspondent LIzbeth Scordo what else has been done to broaden the fans’ experience both inside and outside the stadium tennis courts.