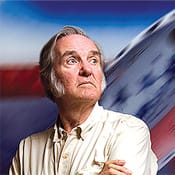 Charley Akers photography from Akers’ book of Portraits of Americans who have changed the world, scheduled for a 2011 release.

Burt Rutan made international headlines in 2004 with his design of SpaceShipOne, the first privately built spacecraft to reach space, followed with the design of Voyager, the first aircraft to circle the world nonstop without fueling. Other projects from his company, Scaled Composites, keep trumping prior innovations, such as the Virgin Atlantic Globalflyer, which enabled the first solo, nonstop flight around the world.

Rutan’s “hobbies” include writing dissertations on global warming, traveling to Egypt to determine how the pyramids were built, and developing his own theory on the Kennedy assassination.

He and his writer wife, Tonya, live half the year in their hexagonal pyramid house in Mojave and the other half at PGA West in La Quinta.

With so many accomplishments, do you have any regrets?

I might regret using a 5 iron! A lot of things I have regretted at the time; but when I look back on a lifetime of them, I realize I would have had a boring life without them. You need chaos to cause change, to be creative and innovative.

You’ve been called a maverick, most recently for your views on global warming. Why?

The theory that there is a risk of catastrophic global warming based on human emissions is based only on computer models. The theory is not supported by climate data when the data is subjected to a proper engineering review.

How do you spend your time in the valley?

After I lost my medical [clearance] to fly 12 years ago, I began working on my golf game. I created an “Arctic hat” to wear for golfing in the heat. I also built a composite putter — not to market it, just for the fun of it.

Your wife says you have an amazing sense of humor for an engineer. Is that true?

Well, we do have a family of stuffed bears that are our “children.” Tonya and I talk for the bears. We have teddy bear voices down really well.