White Guy on the Bus Shines With Dezart Performs Cast 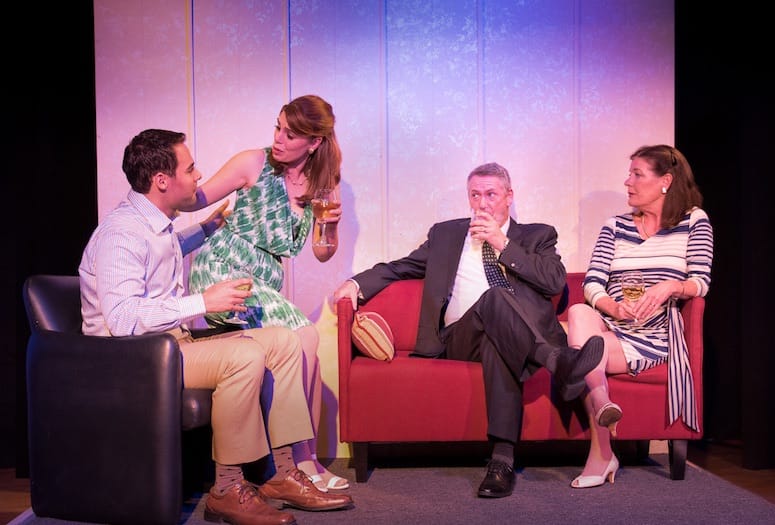 White Guy on the Bus is, frankly, superb theater. With a terrific script, a talented cast, and fantastic things going on in other departments (lighting, sound, costumes, set design), this is a show not to miss.

Ray and Roz (played by David Youse and Alexana Thomas) are an older childless married couple with the seemingly perfect white people life: plenty of money, a house in the suburbs, jobs they tolerate (Ray)/love (Roz), and a young friend with great promise (played by Sean Timothy Brown) to whom they plan to leave their worldly possessions when they pass.

Roz, who has no plans to retire from her beloved job at an inner city school, is up for teacher of the year. But as a white woman working in a primarily African-American environment (where she is repeatedly called “white bitch” by her students), she knows she won’t win. Ray is a “money guy” who makes a very nice living but secretly resents helping rich white folks become richer by dodging the law.

I’m not sure how much more I should reveal here, but at some point Ray rides the bus and meets Shatique (wonderfully acted by Desireé Clarke), a young black woman who’s doing all she can to better her life for herself and her young son. They forge a casual friendship that explodes when Ray offers her a lucrative but not-so-moral proposal …

And that’s really all you need to know. To reveal any more would be a grave disservice to Graham’s cleverly structured, deftly written script. Rather than hit us over the head with black-versus-white or white-versus-black agendas, White Guy on the Bus presents (via discussion as well as action) a plethora of racially charged scenarios, which raise a number of important questions: Why is there still such a differential in this country between people of color and Caucasians? Are we racist in ways we don’t realize? How far would you go for money? Or revenge? Rather than taking a stand in any direction, the playwright lets the audience decide for itself. Which deserves a major bravo. 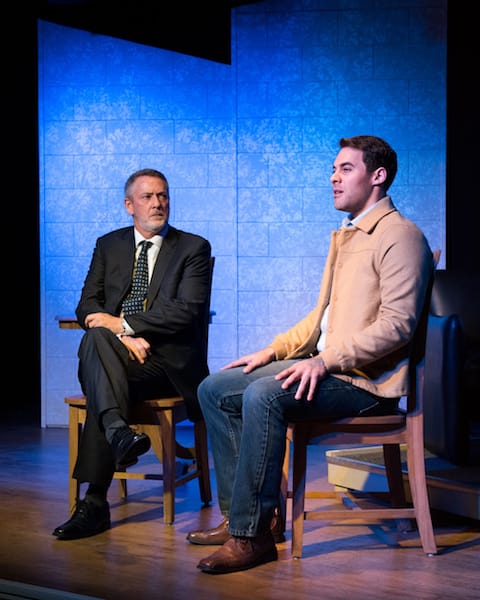 David Youse as Ray with Sean Timothy Brown as Christopher.

The cast is terrific. David Youse and Alexana Thomas are perfect as the older couple. Both performers bring a believable familiarity to their characters that would make anyone in a long-term relationship nod their head in agreement. As the younger couple, Christopher (Brown) and Molly (Bianca Stoker) offer an alternative dialog on the topic of race. Both are well-cast and terrific in their roles.

As Shatique, Clarke hits it out of the park. In the beginning of the show, she seems simple, demure, and focused. But as things go down, she emerges into someone you don’t want to mess with, showing both vulnerability and strength as she fights for what she believes is right. It’s a rich, multilayered performance.

Thomas L. Valach’s masterful set provides us with four distinct locations, around which director Michael Shaw has adroitly constructed the action, allowing for a number of cleverly woven-in flashbacks and flashforwards. Sometimes scenes overlap, other times they happen simultaneously, but everything moves effortlessly. Matthew Garrett’s lighting design and Clark Dugger’s sound design are subtle but genius. When the action moves to the bus, the lights and sounds are shockingly vivid and realistic. 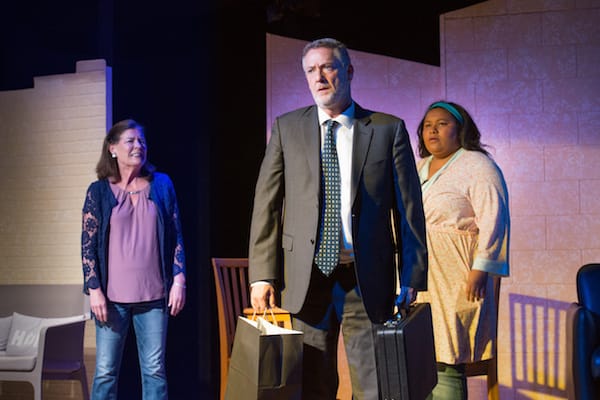 Desireé Clarke as Shatique in a scene with David Youse (Ray) and Alexana Thomas (Roz).

Frank Cazares’ wonderful costumes also help us navigate where we are at any given time. With the exception of Youse, who doesn’t leave the stage during the show, each actor has a number of wardrobe changes — I think I counted six for one character — which wonderfully reflect the state of mind of each character and where they are in the story. Like everything else about this production, the attention to detail is impressive.

Despite presenting us with several hard truths about race relations in this country, White Guy on a Bus manages to be entertaining, moving, and — most importantly — thought provoking. Highly recommended.

White Guy on the Bus runs through March 10 at the Pearl McManus Theater at the Palm Springs Woman’s Club. For tickets, call 760-322-0179 or visit dezartperforms.org.