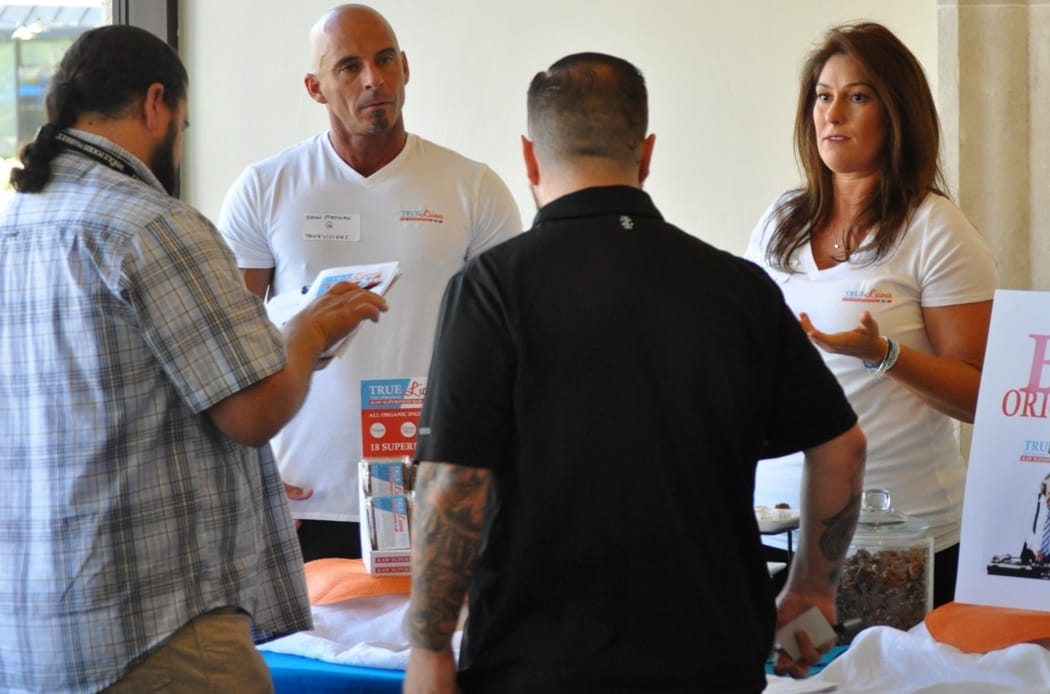 Like many entrepreneurs, Michelle and Kevin Steadman had hit that proverbial fork in the road.

Their product, a health bar called TRUElicious, was already available in a dozen local locations and growing, but retailers outside the Coachella Valley couldn't gain access to their product.

Under the Cottage Law, which allowed the Steadmans to start their business and make the bars in their Indio home, it didn't allow for them to expand to outside markets.

"So we were caught in this place of we either don’t do anything and close it down altogether, or we make this big leap and we go for it," Michelle says. "And we did. We want to be the next big thing that comes out of the desert."

Just last week, the couple signed the papers to purchase a building not far from their home where they plan to manufacture the bars. As part of that move, the Steadmans are looking for bigger players to sell their bars, which made the Whole Foods Vendor Fair the perfect opportunity to show their product June 10 inside the San Jacinto Ballroom of the JW Marriott Desert Springs Resort & Spa in Palm Desert. Whole Foods plans to open its Palm Desert store Sept. 24.

This is the first time Whole Foods' Southern Pacific Region has put on a vendor event prior to an opening of a store, according to Ashley Gibbons, associate marketing coordinator.

"The idea was to put out a call and bring them to us at one time and had Whole Foods people there to meet as many people as we could in one day, and also bring out our own current suppliers to showcase some of our fresh new products, so a sneak peek of what we’re bringing to the desert," Gibbons says.

More than 50 vendors were in attendance featuring free samples of products ranging from baked goods to soaps to footwear. The event was also open to the public.

"It’s a nice time for us to meet them," Gibbons says. "We get to meet our new customers and kind of taste the flavor of the Coachella Valley, what’s out here, what are people interested in, what resonates with them, and what are they already making." Michelle Steadman used to buy health bars  but soon became disenchanted when she started looking at the label.

"I don’t know what half of these things are," Michelle says. "It was almost a glorified candy bar, and I felt there had to be something better."

So she began making her TRUElicious bars for her family, and would bring them with her to munch on between teaching pilates classes. Soon her students began to ask what she was eating, and once they sampled her bar asked where they could get more.

"Oh no, no, no, I’m not selling them," she recalls saying. "That lasted a very short time, and everyone kept encouraging me to go out and sell it. So I thought, well, I guess the whole reason I made it is because it didn’t exist."

If the Steadmans are lucky enough to have their product sold at the new Whole Foods store in Palm Desert, it will be found in the refrigerated section. That's one way they have tried to separate themselves in the marketplace.

"What this is all about is getting back to the basics and eating real food," Michelle says. "No artificial ingredients. We don’t want to be on the shelves like other bars that have a two-year shelf life. Keeping it in refrigerator section is different, and shows that things go bad. Just like if you bought an apple in the farmer’s market, it will go bad after a while."