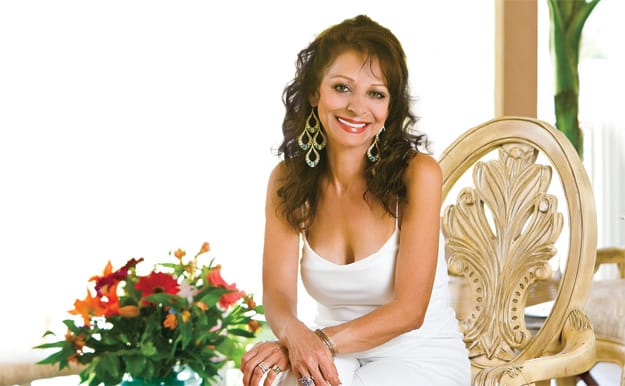 Afsaneh “Sunny” Gibbs immigrated to the United States in 1995 from her native Iran and embraced a new found opportunity: politics. “I can say what is on my mind without ending up in jail!” she says. Because of her heritage, she was surprised when Hillary Clinton accepted an invitation to attend a fundraiser at her home in San Francisco. Gibbs exhibits photographs of politicians she has met on the wall of Afsaneh’s Spa Salon in Palm Desert.

What sets your salon apart from others?
I have an exclusive license here for a line of ammonia-free, all-botanical hair color products. It’s especially good for women who are pregnant, are undergoing chemotherapy, or are sensitive to chemicals. It comes in only six colors, so you have to be a color specialist. Because they’re nontoxic, I get customers from Gilda’s Club [cancer support center in Cathedral City]. I don’t charge if they have to pay big medical bills.

When you came to this country, you first worked in San Francisco salons. When and how did you strike out on your own?
When I worked at Heidi’s as a manager, they sent me to extensive classes. Then I would teach the stylists in their California and Texas salons. In 1995, I opened my own business. One of my three salons was for VIPs. A lot of celebrities wanted privacy or had to come in early or late. In 2008, my husband, John, and I moved to the desert and I retired.

Why did you open a salon in the desert after retiring?
Years ago, I was invited to Canada to do hair for the prime minister, attorney general, and other cabinet members for Canada Day ceremonies. Some of them come to the desert and have second homes here. They called me to do their hair and I rented a chair for one day from a salon. At the end of the day, the owner asked me to work there, but I couldn’t work for somebody else. My next move is to add massage and facials — everything organic.

You’ve met many politicians. Whose hair have you done?
Secretary of State Condoleezza Rice. I had squeezed her in and knew she was going somewhere. She was so calm and kept saying, “Don’t rush. Everything is OK.” Afterward, she sent me a beautiful bottle of wine with her own label.

What’s the most memorable styling job you’ve had?
I did hair and makeup for an Indian bride. A jacket that went over her gown was $800,000. Two men carried in the headpiece. It was worth a million dollars. Both were covered in jewels. Then there was the lady who had lost her hair from chemo treatments. She was going to a wedding, and her hair was about an inch long. I made it sexy. When I was done, she hugged me and wouldn’t let go.