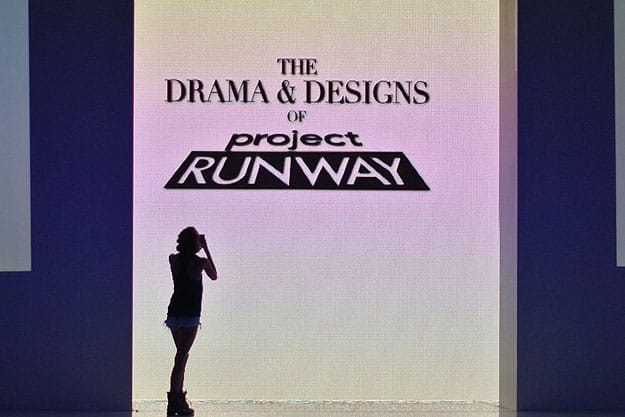 The cocktail-primed crowd streamed into the Big White Tent on Wednesday night anticipating an explosion of dramatic design, and the stars of Project Runway delivered.

The evening featured lots of black and white, A-line dresses, leather and lace, bright greens and yellows, and daring color blocking. Also big on the runway were embellishments, which included everything from sequins, beads, crystals, and studded grommets to ostrich feathers and pearls. Gloves and headwear helped define the designers’ individual styles — from fingerless long gloves to April Johnston’s distinctive half gloves in black leather covering only the fingers and part of the hand.

The action began when the swell of attendees finally settled into seats — fashionably late, of course. The lights dimmed and Darth Vader’s heavy, rhythmic breathing pulsed from the speakers as the capricious Aaron sent his newest looks down the runway.

He was followed by exotic looks from Korto Momulo, a romantic vibe from Gordana Gehlhausen, and Elena Slivnyak’s modern IIMUAHII collection.

Fabio Costa asserted a different with his self-described circus-inspired collection of off-sized clothing and unusual proportions. And Joshua McKinley sent gorgeous male models onto in colorful board shorts, hoodies, and shirts with wild prints.

Mondo Guerra went all out with his “Haute Dog” spring line of bold, bright prints and patterns reminiscent of a day at the beach. Hot dogs and red-white-and-blue rocket popsicles infused a fun spirit into the collection.

Local favorite Michael Costello was the last designer of the night, showcasing a magnificent 20-piece collection. “His ability to use the finest beading — imported from Dubai and India — and exquisite fabrics were the key to his array of red carpet and runway-worthy gowns,” says Palm Springs Life Fashion Editor Susan Stein. “Michael has not strayed from his dream of creating sexy elegant gowns. He has given us the pleasure of watching him soar to the next level as a designer.”