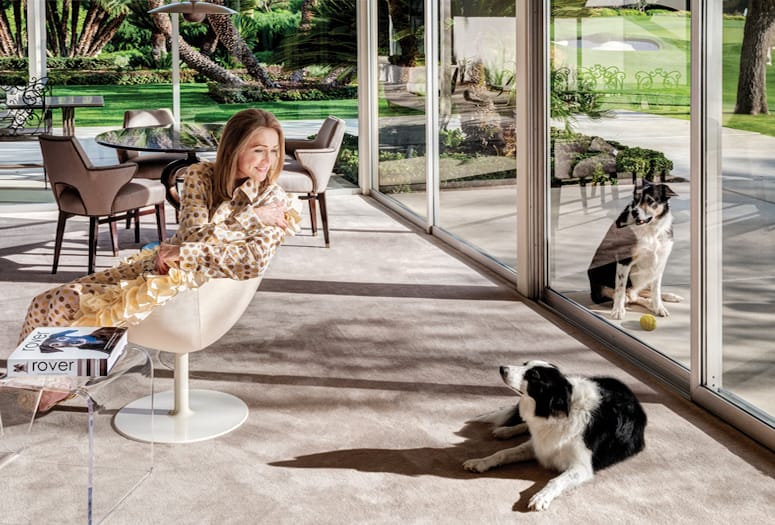 Cheryl Bressler relaxes at her Indian Wells estate with her dogs Fly (left) and X.
PHOTOGRAPHS BY DAVID BLANK

“Fly, my love! Fly, come! We’re going in,” Cheryl Bressler calls out as her border collie deftly noses through their lush back garden. Fly is understandably reluctant to leave the spectacular view of Eisenhower Mountain near the dogleg of Eldorado Country Club’s eighth green and ninth tee box. Nonetheless, Fly soon acquiesces and joins Bressler inside to resume co-hosting a tour of their airy estate, an original William F. Cody built in the 1960s.

Minnesota native Bressler and her husband, Dick, share the 9,894-square-foot home on 2 acres with their dogs Fly and X, a border collie mix. Bressler first spotted the property for sale in early 1998 and closed the deal on Easter Sunday. “I lived in this house for two years to figure out what to do with it because it was in total disrepair,” she says. She eventually called in Brent Leonard of New York–based architecture and interiors firm FormArch, who had remodeled her New York apartment and built her Wyoming home, for guidance.

“Brent is phenomenal at taking an existing structure and figuring out what to do,” Bressler says. “When I brought him to this project to look at it, he was so excited because the basic bones were really good.” 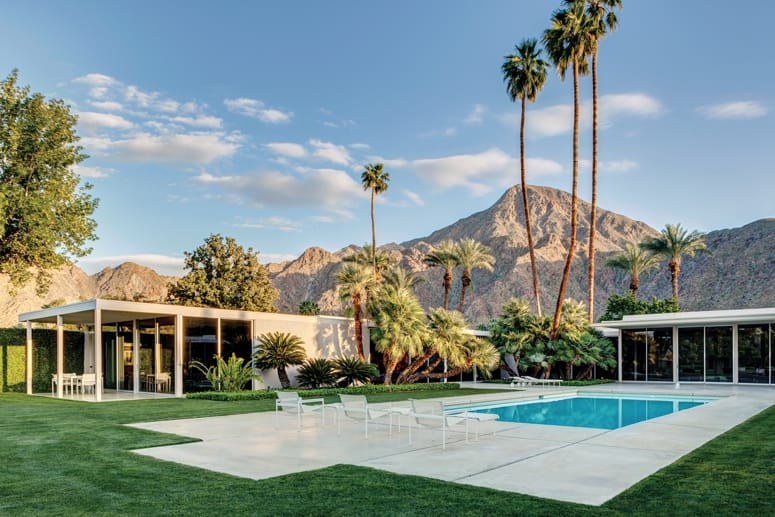 This sleek, 9,894-square-foot home at Eldorado Country Club features spectacular views of Eisenhower Mountain, named for the 34th president; he owned a vacation home nearby on the course’s 11th fairway.

“The beauty of this house is that not only is it on a cul-de-sac, but it also has a brilliant floor plan, which I call a ‘squared-off horseshoe.’ It offers privacy and yet gives us this sense of the outdoors being in.”

The rest, it seems, was destiny. “When Brent was looking for inspiration after he had been out here, he was going through Architectural Digest archives, and — lo and behold! — he finds the house. He called me and said, ‘You’re not going to believe this.’ ”

“We had started on the project, and it was this little coincidental miracle,” Leonard says. “I was at a flea market in New York leafing through some vintage Architectural Digest copies and three minutes into it, I flipped open this page — and there was our house. It was so cool.”

The 1971 feature, called “Design for Vacation Living,” reveals the home’s interiors as they were originally created by Harold “Hal” Broderick of Arthur Elrod Associates. The style then was anything but neutral, at least by today’s tastes. Vivid green Edward Fields carpets stretch out like the Eldorado fairways. Around a game table, orange-and-yellow plaid upholstered chairs mirror the color palette of the striped kitchen. Signature Elrod items include bright yellow poolside furniture, floor-to-ceiling green tieback draperies, and a custom hanging buffet. Bressler keeps two of the home’s original side tables in her private study.

The minute he walked up to the house, Leonard saw its potential. “The aesthetic worked well with our firm’s philosophy, which is expansiveness, graciousness, and openness. The idea of light and shadow was beautifully represented, even in its existing state. Because it’s such a big house and it’s all horizontal — you look across that main foyer, and it’s probably 100 feet across — it’s grand in an understated way.”

Bressler agrees. “The beauty of this house is that not only is it on a cul-de-sac, but it also has a brilliant floor plan, which I call a ‘squared-off horseshoe.’ It offers privacy and yet gives us this sense of the outdoors being in.” 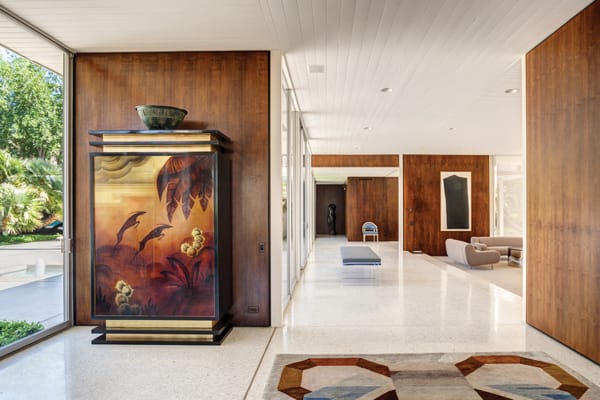 Cheryl Bressler spotted this exquisite Jean Dunand French lacquer cabinet in Architectural Digest: “I saw it there and couldn’t live without it.” 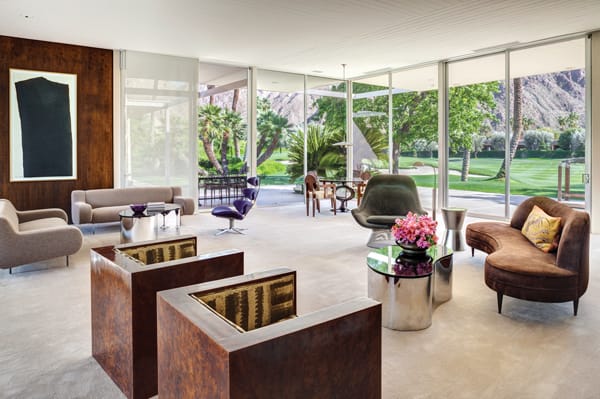 The 30-by-40-foot main living room features views of the fairway and eighth green. The Bresslers often have lunch there. 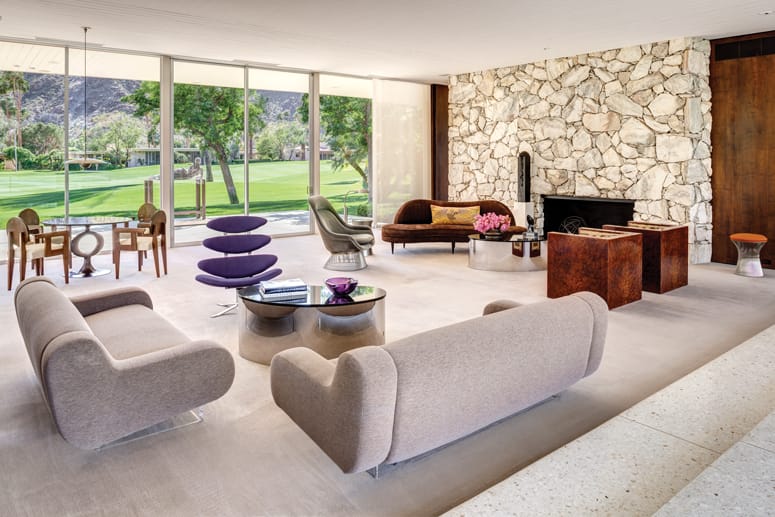 Brent Leonard’s updated design preserved William F. Cody’s original stone fireplace façade. Leonard envisioned the ever-changing furniture layout to be “derived from the idea of a random pattern of petals or leaves falling into the space.” The sculpture outdoors, Reclining Woman, is by Julian Voss-Andreae.

The pair worked together on the project, starting with a construction overhaul to bring the home’s structures up to code, then opening up previously segmented areas and adding more floor-to-ceiling windows and floating walls for a seamless feel.

“I wanted the walls to feel like they were not hitting the structure of the building,” Leonard says. “We did a reveal at the floor, at the ceiling, and wherever the wall hits the column, so you get shadow.” While none of the original American walnut could be salvaged, Leonard expanded on Cody’s design by using custom-milled American walnut throughout, including on bathroom vanities.

They also preserved as much of the terrazzo flooring as possible, even tracking down the original vendor in Los Angeles, which allowed them to match the aggregates and color for new additions.

The main living spaces — the bottom of the squared-off U-shape tucked around a glistening outdoor pool and an expansive walled yard — showcase the original stone fireplace surround and jaw-dropping mountain and golf course views. Bressler and her husband often enjoy lunch there to watch the golfers. “I love it because people aren’t standing to tee off,” she says. “They’re focused on the green. Their backs are to us, and it’s like watching a movie going by. It’s fantastic.” (A dedicated bar adjacent to the living room, part of the original design, features sliders and drive-up access for thirsty players.)

“Because the living room is 30 by 40 feet, it’s interesting to furnish because you can create multiple groupings,” Leonard says. “My initial thoughts for the furniture layout were derived from the idea of a random pattern of petals or leaves falling into the space.” 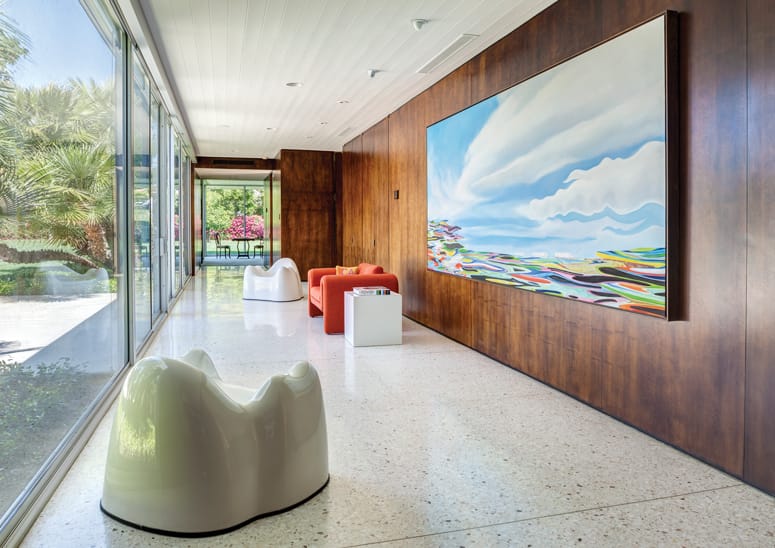 Custom-milled American walnut walls throughout the home feature tucked-away handles, as well as reveals at the floor and ceiling to create shadows. The designer tracked down the home’s original terrazzo flooring manufacturer in Los Angeles to ensure additions were seamless. 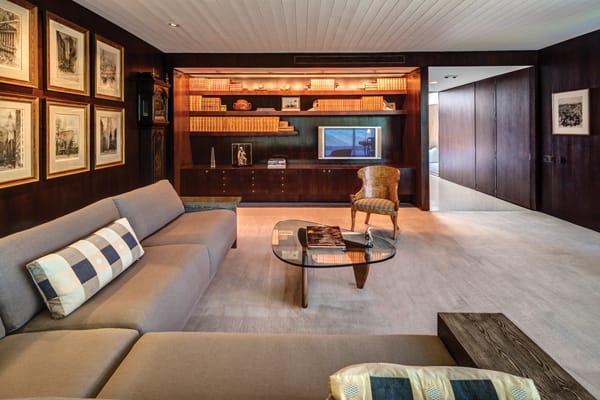 An intimate library at the end of the bedroom/office wing offers a serene sanctuary for watching TV or reading. 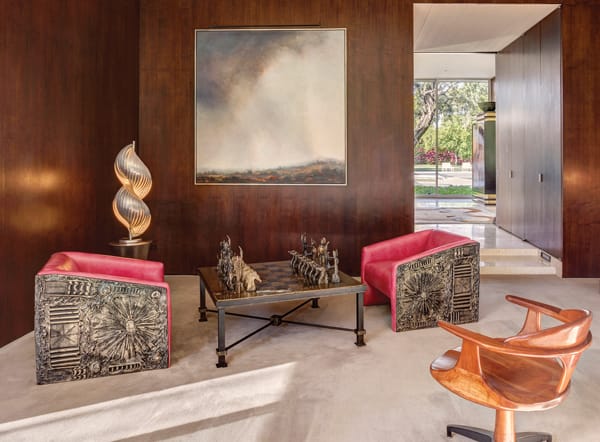 A cozy den off the main foyer.

Bressler often reinvents the rooms by moving furniture around, “so the home has a lot of life and soul,” Leonard continues. “It’s partly the way that house just accepts things; it’s like a gallery space for furniture and living. In the desert, the shadows are so beautifully intense and the light is so clear that everything looks great in that environment.”

The private wing began its life as family quarters, divided into something of a bunny warren of bedrooms. Now, the space features a tranquil master that’s shielded from the golf course with high Japanese blueberry hedges. Hidden gems include a magnificent walled outdoor shower and private onyx spa, plus a massive shoe closet and a snug shoeshine cupboard hidden in the hallway.
An intimate library includes nature views, and there’s also another dining area, as well as a guest bath, which also serves the pool.

Bressler and her husband both have offices in this area; hers is filled with portraits of dogs she has cared for over the years, including her beloved Labrador/hound mix, Blue, who passed away last summer — “the love of my life” — but helped her get started in what she fondly calls “the second-hand dog business.” 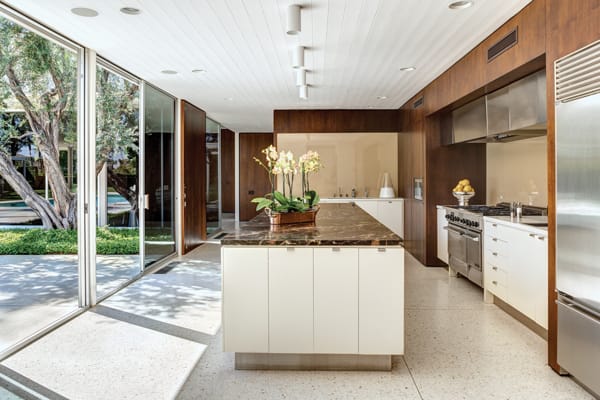 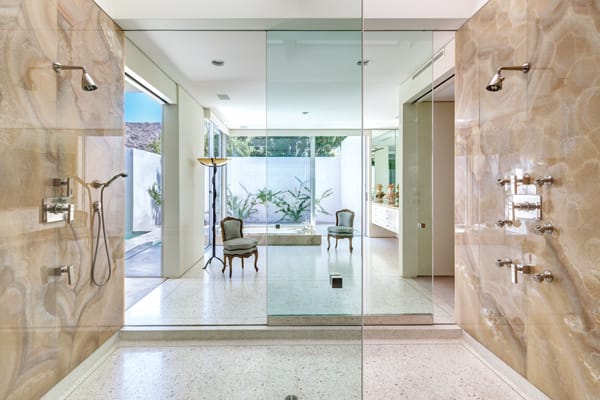 The original kitchen cabinetry covered much of the wall facing the pool. Now the reconfigured layout is light and functional, with floor-to-ceiling windows and added storage space. A porte-cochère off the wing leads to a guesthouse.

A former commercial real estate broker and founder of the nonprofit organization Rescue Me Dog, Bressler has fostered more than 60 dogs here at their winter home in Indian Wells, as well as at their other properties in Wyoming and near Seattle.

“I’m a major dog lover. At one point in Wyoming, I counted 16 dogs in our house,” she says. “My own five, plus all the fosters. With that many dogs and that much going on, there’s not an extra minute. But my life isn’t that way anymore. I’m much calmer and slower paced now.” 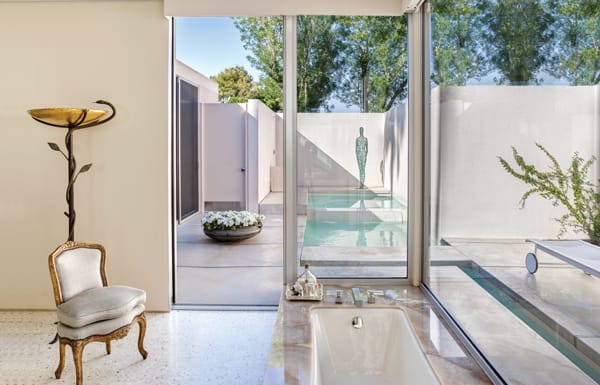 The statue Sphinx, which watches over the private onyx spa, is by Julian Voss-Andreae.

The exception is when Bressler opens up her home every Easter to host dozens of high-spirited dogs for her annual Easter Biscuit Hunt fundraiser in support of animal rescue, slated for April 21 this year.

The kitchen wing, on the other side of the horseshoe, also needed refurbishment and updating; cabinetry covered much of the wall facing the pool. The pair reconfigured the layout to be more functional, installing floor-to-ceiling windows to match the rest of the home. Off the kitchen is a dedicated canine corner, complete with a fridge, food prep counter, and basket of tennis balls waiting to be tossed. An adjacent porte-cochère leads to a spacious, custom-built two-bedroom guesthouse. At 1,812 square feet, it features the same finishes as the main building.

The entire property promotes well-being, Leonard says. “It just makes you feel good when you’re there. I love the integration of the landscape and the interior walls, and how the hedges extend the feeling of the shifting walls on the interior.” Although construction formally ended in 2002, “the house continues to evolve,” he says, “and the current iteration feels very forward.”

Bressler, for her part, is embracing her new, more relaxed pace, and revels in every quiet moment at her desert sanctuary. “It’s so peaceful and beautiful, and it’s got great light and openness.”