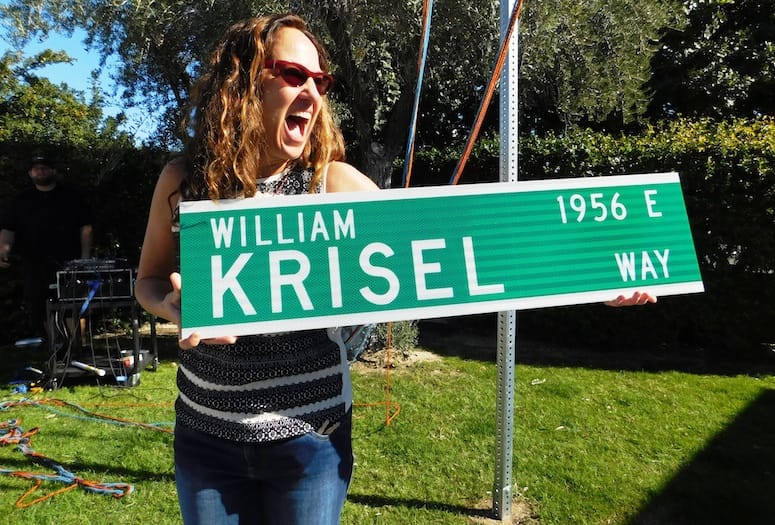 Although too frail to attend the recent ceremony, William Krisel was especially happy his namesake wasn’t designated a road, street, or boulevard.

“I’m just delighted that the street is named William Krisel Way,” he said in a video message. “Because when it comes to Modernism, it has to be my way! I love Twin Palms, my first subdivision. This is the top honor I could receive.” Under a canopy of shade umbrellas, the newly christened William Krisel Way was dedicated recently in the Twin Palms Neighborhood before a crowd of residents, Palm Springs City officials and Modernism Week aficionados.

The honor was bestowed on Krisel for his significant contributions to midcentury modern architecture as exemplified in the Twin Palms Neighborhood where his first structure, the Ocotillo Lodge, was built. Chris Menrad (left) and Eric Chiel with an honorarium for architect William Krisel from the Twin Palms Neighborhood Organization.

Krisel’s niece, Julia Massa, attended the ceremony, and was overjoyed with the recognition for her 91 year old uncle. “This has been so exciting for my uncle at this time in his life,” said Massa.  “I was driving the neighborhood this morning and it’s awesome driving down a street and seeing his homes and going, that’s Uncle Bill’s, that’s Uncle Bill’s, and on and on!”

Eric Chiel, chair of the Twin Palms Neighborhood Organization, spearheaded the effort and says it came together easily because it was a shared vision. Heidi Creighton, co-editor with Chris Menrad, of the newly published, William Krisel's Palm Springs: The Language of Modernism, in front of the Ocotillo Lodge, the first structure Krisel designed in the Twin Palms Neighborhood.

“Everybody saw the benefits of doing this for the entire neighborhood, and it’s a highlight for me because it’s so rewarding to see something as big as this come to fruition,” said Chiel. The crowd listens to Stan Sartor, board member and Modernism Committee chair, at the William Krisel Way unveiling ceremony. William and Corrine Krisel in a 2013 photo.

Christopher Kennedy is in the House