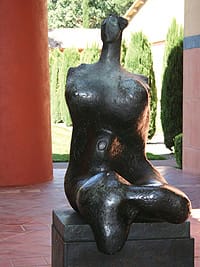 Reasons to visit Napa Valley include chardonnay, viognier, pinot noir, syrah, cabernet sauvignon, art, and architecture. Granted, the last two are not grape varietals; but they are tasteful elements of the wine country. They enhance the wine-tasting experience and offer nonimbibers an opportunity to indulge in their own way.

“He looks for works that challenge him,” says Museum Director Robert Ceballas. “He likes to box with people mentally.” When Hess finds an artist whose work he likes, he rarely stops with one piece. “He collects a broad area of works from artists. It’s key for him to get to know them,” says Ceballas, adding that Hess likes to help emerging artists. “He says he’ll collect a person’s artwork until they don’t need his support anymore.”

The permanent collection rotates. On exhibition this summer at the entry to the Hess gallery was a burning Underwood typewriter titled Hommage by Argentine conceptual artist Leopoldo Maler.

Another winery owner who exhibits his personal collection for public viewing is Cliff Lede. Contemporary sculpture by Jim Dine, Keith Haring, Lynn Chadwick, and Boaz Vaadia are among the works gracing Cliff Lede Vineyards in Yountville. The winery also has partnered with I. Wolk Gallery of St. Helena to present rotating exhibits of contemporary works in an indoor gallery. The opening exhibition included 36 works by 10 artists, including Forrest Moses and Woodward Payne. The primary focus in the tasting room is on sauvignon blanc and cabernet blends.

Clos Pegase welcomes visitors with Henry Moore’s 1958 Mother Earth, as well as sculptures scattered among the grounds. A permanent exhibition in the tasting room showcases modern art from the personal collection of owners Jan and Mitsuko Shrem, as well as an exhibition of wine labels featuring works by Paul Klee, Joan Miró, Wassily Kandinsky, Sam Francis, Yves Tanguy, and other artists. As for wine, Clos Pegase makes chardonnay and cabernet sauvignon (including three reserves).

Craig and Kathryn Hall, owners of Hall Winery (with locations in St. Helena and Rutherford) collect contemporary paintings and sculpture by both the famous (Stella, Francis, Roy Lichtenstein, and Jackson Pollock) and emerging artists. They especially like to support living artists from Texas, where they have a home and offices.

Niches in their Rutherford wine caves hold small sculptures and glassworks, while a chandelier by Donald Lipski with 1,468 Swarovski crystals hangs over a long table used for VIP dinners.

The Halls may soon be as well known for architecture as for their wine and art. By the end of 2009, their St. Helena visitors’ center will be housed in a glass-and-wood creation of esteemed architect Frank Gehry. Renderings of the coming attraction hang in the St. Helena tasting room, where guests can taste Halls’ sauvignon blanc, merlot, and cabernet sauvignon.

Darioush Kahledi, a Persian-Iranian former civil engineer, makes an architectural statement that pays homage to ancient Persia. The stone used to build the 22,000- square-foot Darioush winery was quarried near Persepolis, and 16 columns reaching 18 feet with bull head caps greet visitors upon arrival. Inside, touches of the exotic blend surprisingly well with the clean lines of modern America, including Mies van de Rohe chairs and a crackled-glass wine bar. Darioush specializes in Bordeaux-style wines, but also makes a lovely viognier.

Two wineries that stand out for not standing out on the landscape are Artesa Vineyards & Winery and Quintessa. Designed by architect Domingo Triay of Barcelona, Artesa is so married to the hillside that it is difficult to discern until you drive up to the parking lot. Sculptures, fountains, and water cascading along the sides of the steps to the entrance set a calm ambiance that flows into the minimalist interior design. Artist-in-resident Gordon Huether has created sculptures specifically for the winery, the shape of one shown on Artesa’s label. Founded to produce sparkling wine, Artesa has expanded its line to a dozen varietals.

Quintessa is similarly built into the landscape, a crescent-shaped wall of indigenous tufa rock being the most visible sign that a winery resides on the 280 acres. In fact, arriving guests drive right onto the roof of the winery, which is also the crush pad (the grapes are gravity-fed directly into fermentation tanks in the ultimate example of efficiency). Below a skylight on the crush pad/roof is the winemaker’s blending room.

Though they grow five varietals (cabernet sauvignon, merlot, cabernet franc, petit verdot, and carmenere), Quintessa owners Valeria and Agustin Huneeus concentrate on one wine: a blend that readily sells for $125 a bottle. In addition to grapes, the organic, biodynamic vineyards include vegetables and herbs, as well as chickens and two cows (Quinn and Tessa). Local artist Robbie Lee Frederick’s vellum paintings hang in the polished concrete tasting room.

Opus One also makes one wine (again a Bordeaux blend). The winery was founded by two powerhouses in the world of wine — Baron Philippe de Rothschild and Robert Mondavi — specifically to create one exceptional wine. A salon in the visitors’ center is furnished with pieces from both families, marrying European antiques and New World contemporary design.

To create the building that looks like it could have been built into a mound, the builders dug a crater and used the dirt to create berms. Atop the rather neo-Aztec façade, a pergola serves as a wonderful place to enjoy the wine (poured in the inside tasting room), with 365-degree views and sunlight creating patterns as it shines through slats of California redwood.

At the opposite end of the spectrum lies an 1880s farmstead revived as Nickel & Nickel winery. Restored after 30 years of vacancy, the property includes a Queen Anne-style house where visitors can taste the single-vineyard wines. The winery was developed in a style to give the idea that it grew up with a few family generations. The winemaking team works in a barn (purchased through a company that finds now useless barns to repurpose) that was taken apart and reassembled on site, though it had to be raised 3 feet. In 2006, the winery bottled 13 cabernets.

These are by no means the only wineries with art and architecture to attract visitors. But they are some of the best places to enjoy the ambiance — and excellent wine.