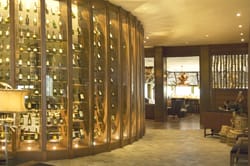 The heck with 99 bottles of beer on the wall. The curved glass wall of the private-dining Magnum Room at Bin 189 restaurant — lined floor to ceiling with some 700 wine bottles — lure oenophiles from the main section of the lobby at Lake Arrowhead Resort and Spa in Lake Arrowhead. Alas, a closer inspection reveals these icons of grape lust are empty (an earthquake insurance requirement), their contents consumed by previous guests.

Ah, but don’t panic. Bin 189 has thousands of bottles still corked. And the selection is large enough that a person could order a bottle of wine at the vino-centric restaurant every day for more than a year and never have to drink the same wine twice.

“I love to turn people on to a new varietal that they have not previously experienced,” says Bin 189 sommelier and General Manager Phil Armstrong, suggesting albarino as an example of a lesser-tried grape.

Just as the name Bin 189 refers to the resort’s location on Highway 189, so it categorizes wines from highways that travel through wine country: Bins 29, 101, and 128, et al. For grape-growing regions not on a main thoroughfare, the restaurant uses other designations — such as Area 51 (a not-so-subtle reference to the remote section of land in Nevada described in Wikipedia as “one of the most secretive places the world”). Armstrong calls these “hidden gems;” they include a syrah rose from Renwood Winery in Plymouth, Calif., and chardonnay from St. Innocent Winery on the outskirts of Salem, Ore.

For someone seeking a specific wine — say, a Grgich Hills zinfandel — who doesn’t know if the winery is on Highway 12, 29, or 128, all of which run through Napa (for the record, Grgich is on 29), the wine menu includes a “master list.”

To encourage experimentation, Bin 189 offers four pre-selected wine flights (three 2.5-ounce pours) — or guests can create their own flight from any wines available by the glass.

The restaurant also hosts monthly wine dinners that attract 100 to 120 people and weekly (Wednesday) wine tastings that include three wines paired with hors d’oeuvres. Armstrong says Bin 189 has a strong following among locals, which include Coachella Valley residents with second homes in Lake Arrowhead. Some locals regularly dine at the restaurant two to three times a week, and many of them belong to the restaurant’s Magnum Club, which for a membership fee includes discounts and two club receptions a year.

While California wines comprise 65 to 70 percent of the wine list and French wines about 15 percent, guests will also find Pacific Northwest, South American, Spanish, and Italian wines. The least expensive bottle is $21 for a Clos du Bois merlot or a Castello Banfi Col Di Sasso (cabernet-sangiovese blend) from Tuscany. The most costly are from France: $399 for a Chateau d’Yquem sauternes (375 ml) and $375 for Louis Roederer Cristal Champagne. According to Armstrong, the average price paid by diners is $57.

With more than 425 wines from which to choose, Bin 189 guests will surely find one that tickles their fancy.