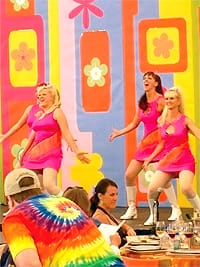 Peace signs and love beads, lava lamps and beanbag chairs, tie-dyed shirts and go-go-boots, a pop flower-adorned Volkswagen bus and the music of Jimi Hendrix. Is this any way to promote winemaking savvy?

It is in Sonoma County, where the 1960s-themed wine auction last September — dubbed “1 Day of Peace and Wine” — raised more than $700,000. While the Northern California vintners exhibited a sense of fun and downright silliness, they are serious when it comes to winemaking. After all, the California chardonnay that conquered French counterparts in the famous Judgment of Paris was from Sonoma County: a 1973 Chateau Montelena chardonnay, made primarily from Alexander Valley grapes.

Landmark Vineyards owners Michael and Mary Colhoun have employed the same winemaker for 20 years and the same vineyard manager for 30 years. Helen Turley, one of California’s top winemakers, serves as a consultant.

Framed menu cards from White House dinners hang on the walls of the winery in Kenwood. “The head usher comes out every year,” Mary Colhoun says. When Landmark Vineyards wines are served (including the 200th anniversary of the White House on Nov. 9, 2000), he sends them printed evidence of the occasion. The 2006 Demaris Reserve chardonnay was served at a White House dinner for the G-20 economic summit participants in November. Another Landmark fan holds sway in a broader arena: “Martha Stewart said on her show that our chardonnay was her favorite wine to serve at a wedding,” Colhoun proudly notes.

Just down the street (Highway 12), wine lovers are advised to take a hike — but only in the nicest sense. Kunde Estate Winery and Vineyards owner Jeff Kunde welcomes guests to join him on eco-hike tours, during which he explains the finer points of sustainable growing practices. In 2008, the winery also introduced a dog eco-hike, with proceeds donated to Canine Companions and Sonoma County Humane Society.

The fifth generation wine estate initially sold its grapes to wineries, primarily to Sebastiani. “I used to get 25 cents an hour when I worked in the vineyards,” Kunde says.

In 1990, the family began bottling its own wines, but also sold excess grapes to Arrowood, Mondavi, Sebastiani, Stag’s Leap, Kenwood, Beringer, and others. The property has grown from 640 to 1,850 acres (750 planted to vineyards). “I figured it out once,” Kunde says. “We can get 32 championship golf courses on here.”

Additional fun factor: Most of the aerial and outdoor scenes in the 2008 movie Bottle Shock were filmed over and on the Kunde property. The boxing ring in which the father and son worked out their disagreements in the film still stands at the top of a knoll among the vineyards.

Landmark and Kunde are but two of some 350 wineries in Sonoma County, which covers more than a million acres from just north of the Golden Gate Bridge to Mendocino County and from the Pacific Ocean to Lake and Napa counties. It encompasses 13 American Viticultural Areas, the most well known being Sonoma Valley, Carneros, Russian River Valley, and Alexander Valley.

Taste of Sonoma (Sept. 6) offers wine enthusiasts an opportunity to compare a wide range of varietals from AVA-grouped wineries. About 120 wineries took part in 2008’s Taste of Sonoma. The hosting winery, MacMurray Ranch, was founded by late actor Fred MacMurray in 1941 as a cattle ranch and became part of the Gallo family holdings in 1996. Daughter Kate MacMurray has watched Sonoma County agriculture evolve from hops, plums, prunes, and apples to more diversified crops, including grapes, as well as cattle and dairy operations.

“It’s so diversified from a food perspective, and that’s such a wonderful companion to the wine being made here,” she says. “[Taste of Sonoma] honors our past, what we are doing today, and what we hope to do in the future. I feel the ranch is a perfect backdrop for that. … I think [Sonoma County vintners] reflect the good stock that we have come from and hope to keep contributing to. We all have a hand in it — and if not a hand, certainly a heartfelt feeling for it.”