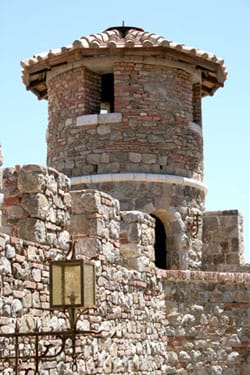 Frank Gehry has his Guggenheim Museum Bilbao, Jorn Utzon has the Sydney Opera House, and now Dario Sattui has Castello di Amorosa. The fourth-generation winemaker and owner of V. Sattui Winery in St. Helena spent 14 years and spared no expense in creating his Castle of Love in Napa Valley. Initially, Sattui — who recently reclaimed his proper name of Dario after going by Daryl for years — had planned to renovate a Victorian house on property along Highway 29 across from Sterling Vineyards. He ultimately designed a 121,000-square-foot medieval castle/winery.

Castello di Amorosa, which opened in April 2007, demands a tour. You can taste wines without touring, but it’s well worth devoting 90 minutes to the grander experience: 50 minutes for a guided tour, followed by sampling wines in a reserved tasting room. A VIP tour adds a tasting of reserve wines and food pairings. “There are never more than 12 people [on a tour], because we want it to be an intimate, nice experience for everybody,” Sattui says. According to tour guide Cynthia Kee, visitors come from all over the world, having heard of the Napa Castle.

Sattui had no intention of creating a Disneyesque castle. In fact, he wanted the result to be so true to his Italian heritage that he imported 200-year-old roof tiles from an Italian farmhouse and brought in European craftsmen who knew Old World building techniques such as cross-vaulting bricks. Hand-squared stones, half-ton doors with hand-forged nails, iron sconces and chandeliers hand-forged in Italy over open flame, 200-year-old bricks from Austria bearing the Royal Hapsburg seal, hand-planed timber stairs, and guard towers lend authenticity to the castle.

The grand dining hall — available for rent and used by Gov. Schwarzenegger for a luncheon shortly after the castle was completed — features a fireplace more than 500 years old from a Tuscan village, a hand-carved and painted ceiling, a large handmade Italian table and chairs, and frescoes that took two Florentine brothers two years to paint.

Although Napa County prohibits marriage ceremonies at wineries (except at V. Sattui, grandfathered in when the Wine Definition Ordinance was passed in 1990), the castle does have a chapel with a confessional. And the daughter of best-selling author Danielle Steele held her wedding reception in the courtyard. Of course no medieval castle is complete without a torture chamber, and even the Castle of Love has one — with authentic torture devices that make 24’s Jack Bauer seem more like Gandhi.

Of the 107 rooms, more than 90 are dedicated to winemaking. Three varietals are grown on the property’s 30 acres of volcanic soils (deficit-irrigated to yield the best, not the most, grapes): cabernet, merlot, sangiovese, and primativo (a precurser of sorts to zinfandel, which resulted from the cross-pollination of primativo and dobricic grapes in Croatia). The winery also grows grapes on about 17 acres in Anderson Valley.

“One thing we do that’s different from other wineries is we try to give our red wines — except sangiovese, which is meant to be younger — at least two years in the bottle before we sell it,” Sattui says. “Most Napa Valley wineries are selling 2005s now. We try to get more complex, rounder, softer, and more harmonious wines.”

In fact, Castello di Amorosa released its 2004 vintage of Il Brigante cabernet/merlot blend before its first vintage of 2002. “Hillside grapes are much more intensely flavored and more tannic,” Sattui explains, adding that the winery did not make a 2003 Il Brigante and in 2004 “bought valley-floor grapes to soften the tannins.” (The blend is the winery’s second or third best seller, Sattui notes.) The 2002 merlot also was released just this year.

Castello di Amorosa produces about 8,000 cases a year, available only at the winery, through its wine club, or online (www.castellodiamorosa.com). The wines include the following:

•    Three gewüztraminers (dry, slightly sweet, and late harvest) from Anderson Valley grapes;
•    Three chardonnays with grapes from Sonoma Valley, Russian River, and Santa Barbara County (the last two being reserve wines);
•    Pinot grigio from Anderson Valley grapes;
•    Pinot bianco from Carneros grapes;
•    A sangiovese/pinot grigio rosé with grapes from Dry Creek Valley in Sonoma County;
•    Two cabernet sauvignons (one a reserve), a merlot, and a cabernet-merlot blend with grapes primarily grown at the winery but also from the Rutherford and Oakville appellations.
•    A super Tuscan blend of cabernet sauvignon, merlot, and sangiovese called La Castellana (female head of the castle, named in honor of Sattui’s wife, Yana) also with the Napa Valley grapes;
•    A muscato canelli port with grapes from Santa Barbara County; and
•    Fantasia, a slightly sweet, sparkling rosé with valdiguie and gamay grapes from Napa Valley — styled after the popular brachetto wine of Piedmont, Italy (Sattui’s heritage). According to Sattui, the wine is fermented two to three days and has a low level of alcohol (about 5 percent). The winery sold out of its first vintage (2006) of 400 cases. “People have gone wild for it,” he says. “We made two-and-a-half times more this year and still won’t have it at the end of the year.” Sattui predicts that the 1,000 cases released in April will last only until November.

Dario Sattui bought his first castle in 1989. Yes, his first castle. While real estate speculators snap up fixer-uppers in trendy retro metros, Sattui turns his attention to medieval architecture in centuries-old villages — but not to make his fortune; his moneymaking ventures are in wine. He sold his first castle in Florence, Italy, eight years ago. But by then, he had acquired a 10th century monastery 23 miles east of Sienna.

“I’m keeping it for myself,” he says of the 17,000 square feet he has been renovating. After making his name in the Napa Valley at V. Sattui Winery and now his ode to Old World Tuscany, Castello di Amorosa, the man who traces his family tree to Piedmont says he’s planning to live part-time in the Italy he loves so dearly.

Five years ago, Sattui bought a Medici palace in Southern Tuscany at auction. “I got it for a song,” he says. In Southern Tuscany near the border of Lazio, the property includes a customs house and olive mill. “It was built in 1587 by Fernando I of Medici,” Sattui says, noting that in its heyday as a famous hotel called La Posta de Medici, it hosted emperors and two popes.

“My idea is to make it a language school, cooking school, wine school, and maybe a history school with excursions in the afternoon,” he suggests. Twenty feet from the property is a fountain. “I might as well have a fountain, too,” Sattui says.

His most recent foray into Italian real estate was his purchase three years ago of a 20 percent interest in an 11th century castle 20 minutes from Sienna (and 25 minutes from his monastery). Castello delle Serre (www.castellodelleserre.com) in the medieval town of Serre di Rapolano is now open for business as a hotel with 15 of its 23 guest rooms available. Activities, of course, include wine tasting and wine excursions.