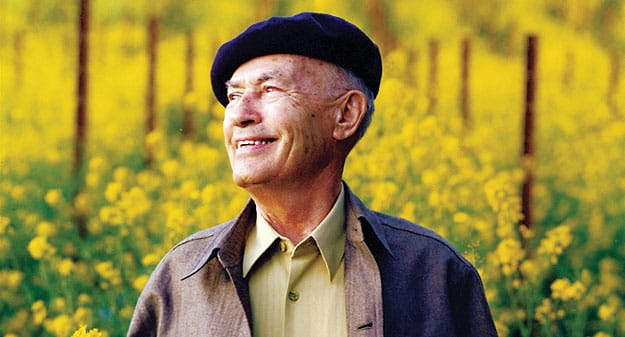 In April, when Mike Grgich departs his La Quinta winter home for the fertile vineyards of Napa Valley (just days after turning 89), he will have hundreds of new friends (and no, we’re not talking about Facebook). At Grgich Hills Estate winery in Rutherford, he greets visitors in the tasting room. During the five months he spends in the Coachella Valley, he attends about 30 wine tastings and dinners featuring his wines.

You’re mistaken if you think it’s all about selling wine. Making friends is so important to Grgich that he promotes this philosophy to his tasting room staff: “Friendship first, then tasting wine — and possibly selling wine.”

Grgich makes friends readily. He sports a smile and sense of humor as steadfastly as he sports his signature beret, but takes winemaking seriously. After working for industry icons such as Brother Timothy (Christian Brothers), André Tchelistcheff (Beaulieu), and Robert Mondavi, he became the winemaker at Chateau Montelena. There he crafted the 1973 chardonnay that put California on the world’s wine map by beating French wines in a blind tasting known as the Paris Tasting of 1976. Grgich has five or six bottles of that wine in his personal library. One is displayed in the winery’s tasting room and another at the Smithsonian Institution with the suitcase he carried when he immigrated to the United States in 1954.

In 2010, a bottle of 1973 Chateau Montelena chardonnay fetched $11,325 at a charity auction. Fortunately, Grgich Hills chardonnay (much easier to find and much less costly), bears the same traits that the winemaker calls “Grgich style”: good aroma, a balance of acid, and a lingering aftertaste.

Grgich stays true to the one that brought him to the dance, with chardonnay comprising about half of the winery’s production. “We consider ourselves a house of chardonnay,” he says. “Grgich Hills opened in 1977, and our first chardonnay was tasted in 1980 at the Great Chardonnay Showdown in Chicago. Of 221 chardonnays from around the world, the first Grgich Hills chardonnay came in at the top and they wrote, ‘Mike Grgich is the king of chardonnay.’

Grgich uses seven clones in his Napa Valley chardonnay, but grows eight. “One clone I didn’t like when I planted it,” he recalls. “It had long shoots with small berries. And in those days, I was thinking that wine has to produce to pay for the expense.” But he discovered this ugly stepsister yielded grapes with great body and complexity. “So we started to make a second chardonnay, which is the Carneros Selection,” Grgich says.

The winery also produces cabernet sauvignon, fumé blanc, merlot, and zinfandel. “We like to concentrate on these wines and make them consistent from year to year,” Grgich says. “We don’t want to make every wine.” The only blend offered is Violetta (named after his daughter, Violet): a late harvest field blend of sauvignon blanc, Riesling, and gewurtraminer. “We wait until botrytis develops on the grapes. It’s the ‘noble rot.’ And if you drink that wine, you become nobility yourself,” he teases.

Growing up in Croatia, Grgich was drinking wine mixed with water at the age of 2 1/2 and started stomping grapes at the age of 3. “They didn’t need to have a baby sitter, because I couldn’t climb out of the barrels,” Grgich says, mischief twinkling in his eyes. “And I had grapes to eat if I got hungry.”

Much later, he studied enology and viticulture at the University of Zagreb and then fled his homeland, which was under the communist rule of Yugoslavia, heading to Canada before making his way to Napa Valley. He found work readily enough, but the attendant publicity of the Paris Tasting changed his life. Suddenly he was courted from far and wide. Austin Hills (of Hills Bros. coffee fame) invited him to his house. “He had a few vineyards in Napa Valley,” Grgich says. “He wanted his grapes to make better wine than French wines.” They agreed upon a partnership that also includes Hill’s sister, Mary Lee Strebl. Grgich Hills labels feature both family crests (Grgich in the lower left corner and Hills in the lower right corner).

Though Grgich remains an active presence at the winery, he has assured stability and sustainability by grooming his daughter Violet and nephew, Ivo Jeramaz, to fill his shoes someday.

Grgich’s legacy also is guaranteed through Roots of Peace, a humanitarian organization dedicated to eradicating landmines. On the 25th anniversary of the Paris Tasting, he hosted a fundraiser to finance the demining of Zadar, Croatia. In addition to making personal and winery donations to the organization, he established a Roots of Peace Fountain at the Rutherford winery. Since 2008, he has helped plant more than 40,000 grapevines and 12,000 apple trees on demined land in Croatia.