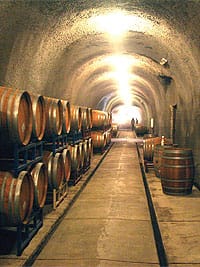 I went to Santa Barbara County expecting to snag a bunch of pinot noir (that is, a bunch of bottles, not a bunch of grapes) and a smattering of chardonnay. After all, those are the wines for which the Central Coast wine region is known. Instead, my haul included only two bottles each of pinot noir and chardonnay, as well as cabernet sauvignon, syrah, late harvest zinfandel, primitivo, viognier, Rhône blends, and even (gasp!) chenin blanc and Riesling. Clearly I had missed the point.

Or had I? It turns out Santa Barbara County’s wine country is quite diverse.

The beautiful Sunstone Winery grows only certified organic red grapes, though it makes sauvignon blanc and viognier from grapes it buys from other vineyards. Its signature wine is merlot — elegant in the Eros label blend of merlot, cabernet franc, and cabernet sauvignon. Sunstone also makes an intriguing syrah port.

Bridlewood Estate Winery makes seven syrahs: three estate bottlings and four “flavor profile” wines. “Syrah may have a red-fruit character or a blue-fruit character, or they may exhibit some other type of character that sets them apart,” explains winemaker Dave Hopkins, adding that each vineyard’s yield is fermented separately. “Every month, I taste through 3,000 barrels, and everything spends 24 months in a barrel.” Hopkins also makes viognier, marsanne, and a blend of grenache, mouvedre, cinsault, counoise, viognier, and syrah that he calls the winery’s version of Châteauneuf du Pape.

Foley Estates produces both a creamy oaked and an ultra-crisp, steel-fermented chardonnay, though its signature wine is pinot noir aged 12 months in 100 percent French oak (25 percent new barrels). Foley also makes syrah and a dry rosé blend of syrah, grenache, and cinsault. All grapes are estate grown, except for the grenache and cinsault.

Dierberg-Star Lane Vineyards has in a short time built an enviable reputation for top-shelf wines. Although owners Jim and Mary Dierberg have been producing wine since a 2002 vintage, they waited until the 2004 and 2005 vintages to release cabernet sauvignon under their Dierberg and Star Lane labels, respectively, to ensure they were the best they could be. Dierberg wines have a Burgundian focus, while Star Lane wines are more characteristic of a Bordeaux. Hot days and a26-plus-degree slope mark the Star Lane vineyards in Happy Canyon just northeast of Lake Cachuma; the Dierberg vineyards lie in the cooler Santa Maria and Santa Rita Hills. The winery also produces pinot noir, syrah, and merlot. Their third label (which is actually their “second” label), Three Saints, is named in honor of the Central Coast’s wine-growing region of Santa Maria, Santa Ynez, and Santa Rita Hills.

Sanford Winery made a bold move when it released its first Rhône bottling: the 2006 Flor de Campo, a blend of 60 percent rousanne, 40 percent viognier, “and a dash of chardonnay.” The result is exotic on the nose, balanced on the palate, and delicately lingering in the finish. Sanford also produces chardonnay (in 2006, 17,000 cases with grapes sourced from four vineyards and 1,000 cases sourced from its two best blocks of estate grapes), pinot noir, and vin gris of pinot noir rosé.

To appreciate the breadth of Santa Barbara County’s wine offerings may take little more than a visit to the tasting room of Lucas & Lewellen Vineyards in downtown Solvang. Though the main focus is pinot noir and chardonnay, the winery grows 25 varieties of grapes. “Everybody talks about micro climates,” Louis Lucas says. “You know what I say? Everybody’s got one. You need a good one.” L&L owns vineyards in four climates: Santa Maria (cool), Los Alamos (semi-cool), Solvang (warm), and Santa Ynez (warmer). “We used to want to express what we could be like. Now we want to be ourselves,” Lucas says. “You want to express the quality of the variety, … and you also want to express the quality of Santa Barbara [County].” L&L wines include one of the area’s few sparkling wines — 50 percent pinot noir and 50 percent chardonnay method champenoise brut made with L&L’s grapes by Napa’s Domaine Carneros. Lucas says he has a particularly personal relationship with the cabernet franc grapes that come out of his yard and get blended in a Bordeaux-style cabernet. “People said you couldn’t grow all five Bordeaux varietals in Santa Barbara County,” Lucas says. “I think I have squashed that [opinion].” And a trip to Australia gave him the idea of co-fermenting cabernet and syrah.

Fess Parker Winery & Vineyard’s large but inviting tasting room is replete with coonskin caps (for heads and wine bottles) in tribute to Parker’s portrayal of Daniel Boone and Davy Crockett on television in the ’50s and ’60s. The winery’s best seller is Riesling, which seems surprising until you taste the dry yet refreshing wine bound to dispel preconceived notions. Other offerings include chardonnay; a blend of viognier, grenache, rousanne, and marsanne; pinot noir; syrah; and a Frontier Red blend of 11 grapes (primarily syrah).

Just off the shoulder of Foxen Canyon Road sits the rustic Foxen Vineyard tasting room — formerly a blacksmith shop when the stagecoach ran through the area in the 1880s and part of co-owner Dick Dore’s family estate. Fifty percent of the winery’s production is in pinot noir, but the Foxen portfolio includes chenin blanc, viognier (from Happy Canyon grapes), and a blend called Range 30 West (also made with Happy Canyon grapes). The 2004 vintage of Range 30 West comprises 50 percent cabernet sauvignon, 30 percent merlot, and 20 percent cabernet franc. The wine’s notes of cedar on the nose derive from 22 months in Taransaud barrels from Cognac, France, which Dore says cost $1,200 a barrel. And as a true sign of Santa Barbara County’s diversity, Foxen also makes a fortified wine from 50- to 60-year-old vines of mission grapes.

Cottonwood Canyon Vineyard & Winery, which has the only wine caves in Santa Barbara County open to the public, gives chardonnay and pinot noir their just due, but also blends its pinot noir with syrah grapes from Paso Robles in a 30-70 ratio (dubbed “Syroir”) and makes Bordeaux blends, syrah, and syrah port. Cottonwood also has produced blanc de blanc and blanc de noir sparkling wines with estate grapes, though the last vintage was 2001.

The area’s oldest winery, Santa Barbara Winery, produced fruit wines (i.e. ollalaberry), as well a zinfandel from Paso Robles grapes when it was founded in 1962. It has since extended its grape growing to not only French varietals, but also the Italian varietals of sangiovese, nebbiolo, and primitivo (the genetic twin to zinfandel).

Sam Marmorstein, owner of The Los Olivos Café (the restaurant made famous by the movie Sideways) also has recently planted sangiovese and nebbiolo grapes. For now, visitors to his café and adjoining Wine Tasting Bar (featuring more than 500 vintages) can enjoy his chardonnay and syrah, bottled under the Bernat Vineyards & Winery label.