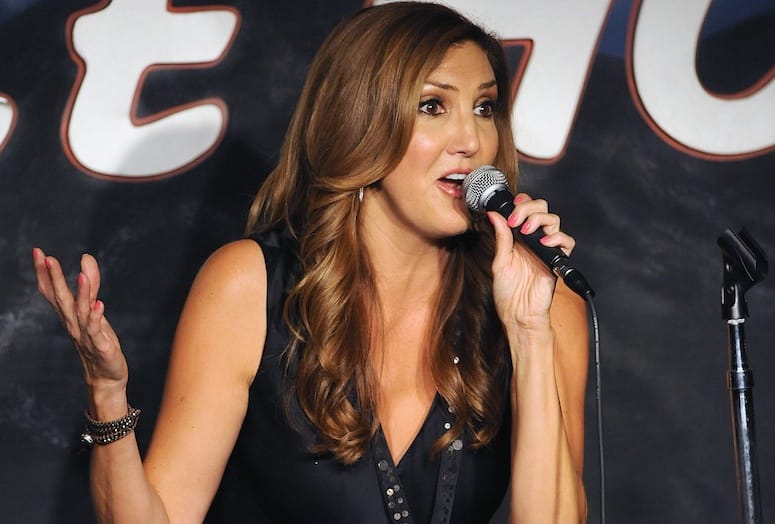 Whether she’s tweeting about her red carpet observations, chronicling The Bachelor on Facebook, or appearing on the E! network's Chelsea Lately, comedian Heather McDonald is one funny mother.

Married to husband, Peter, for 10 years, McDonald injects humor into juggling her career and life with three children. She’s even written about it in My Inappropriate Life (Some Stories Not Suitable for Nuns, Children, or Mature Adults).

McDonald is excited to leave LA for a short break to thrill Coachella Valley audiences with laughs when she performs stand up at The Copa Room Palm Springs, March 14-15. Have you ever done stand-up here in the desert?
Not on my own. I’ve been with Chelsea at the Agua Caliente. I love Palm Springs, the sun and warmth, Trina Turk.

So when you’re packing for the desert, you won’t leave home without…

Speaking of fashion, you recently covered the Oscars on social media…
Yes, it’s really fun to see the comments when you follow it live. It was interesting, I commented on Angelina’s (Jolie) dress saying I thought it was too old for her, and people really responded either defensively for her or they were defending me. It’s a part of my job as a comedian to post/tweet about shows. Social media is a huge part of being an entertainer.

Were you always funny?
Yes, I was definitely a character. By nine I knew I could imitate people and in high school I had a teacher say I should do stand-up. But I didn’t understand why strangers would laugh at me. I loved to entertain my sorority sisters in college, but it wasn’t until after USC (I was in communications and business because you only had to do a certain amount of math) that I took a stand-up class at a Ramada and it clicked. Then I took every opportunity to be on stage.

Who or what has inspired your comedy?

How would you characterize your humor?
I think I’m very honest. It’s definitely R-rated, but not filthy. I talk about my marriage, my life, my kids, observational humor and pop culture. I give impressions in my act within the context of a story. My stand-up is a mix of everything. I think my humor is relatable because I’m so honest. Like, I don’t think I’m the greatest mom.

Is it tough juggling kids, writing, your gig on Chelsea Lately, stand-up?
I think it’s hard for any working mom. I think I am the only married mother with kids that is currently a touring comedian. But I have a supportive husband, who isn’t jealous or resentful of my career or when I’m gone.  He allows me to make fun of him. I also make fun of my kids. Sometimes, my two worlds collide and I do forget where I am. I’m talking horribly inappropriately like I would on a show, but realize I’m at my kids’ Catholic school.

Who is someone you would like to have a Chardonnay with?
Well, I’ve never met Madonna…but maybe one day. She would be fun to have a drink with. I totally love Oprah. Hillary Clinton…she’s a brilliant woman, an interesting person that I could have a conversation with.