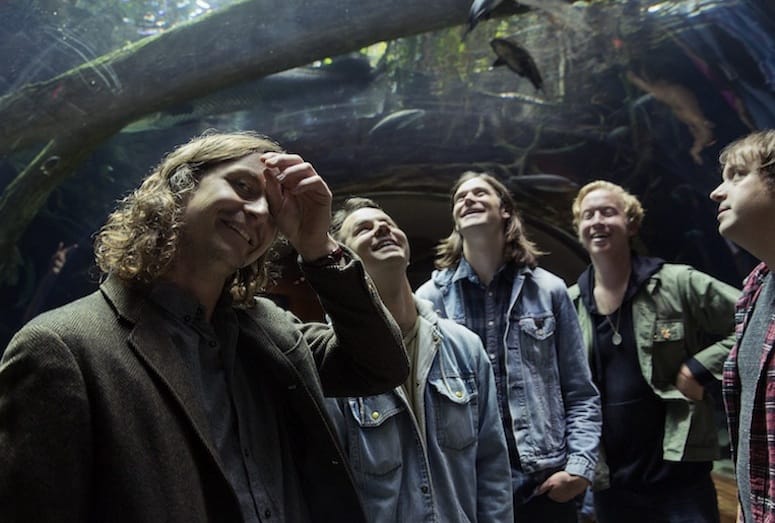 On a trip to the high desert, Sleepy Sun vocalist and songwriter Bret Constantino found more than he bargained for.

“I found part of my voice in the desert,” says Constantino. “It was a very tight knit, family vibe out there. There is so much space available (in the desert). It feels like a special world and an alternate universe.”

Sleepy Sun, a Northern California psych-rock band, recorded its third album, Spine Hits, in 2012 at Rancho De La Luna, and have since added Maui Tears, which was recorded in Grass Valley. They will play Feb. 15 at Pappy & Harriet's in Pioneertown along with Jesika Von Rabit.

While inspiration for the band comes from different influences for Constantino, guitarists Matt Holliman and Evan Reiss, bassist Jack Allen, and drummer Brian Tice, these five musicians have all been touched by their desert experiences.

Constantino (pictured at right from 2010 at the Echo in Los Angeles) took the time to chat with Palm Springs Life about their new release, and getting “trumped” by Queens of the Stone Age. Have you played venues in the Palm Springs area?

“No, but those towns are cool though, because it’s like a weekend getaway for people in LA, like a retreat or a mini-festival experience."

How did you decide to include Pappy & Harriets on your tour for your new album?

“We played at Pappy & Harriet’s several times. We recorded Spine Hits (previous album) at Hicksville in Joshua Tree, with Ethan Allen. We wanted to work with Dave Catching (Eagles Of Death Metal) and we were supposed to record at Rancho De La Luna, his studio. Queens of The Stone Age kind of trumped us, and they got the studio. Then what happened was that Josh (Homme) was offered to do some MTV unplugged thing and he flew out, so we had time to go in and work, but we recorded (Spine Hits) mainly at Hicksville.

There’s a recording studio at Hicksville? Which trailer did you all stay in?
“Yes. The Hicksville Trailer Palace has a bunch of themed trailers and a Jacuzzi. We were in a huge trailer, I don’t recall which one it was called, but it was the biggest one they have. There’s a swimming pool with underwater speakers. They had a killer jukebox with David Lynch and Rockabilly soundtracks. Dave would come to Hicksville everyday and bring equipment down to us there. It was primarily Ethan Allen onsite, then two others, Todd and Jessica Von Rabbit, from Gram Rabbit."

So what is your new album like?
“We have returned back to our preferred method of writing with this record which is to start with more of a feeling.  The structure comes together naturally.  Otherwise you lose the feeling. We recorded this album in 2013 with Tim Green in his studio in Grass Valley. We’ll be touring for the next two months.”