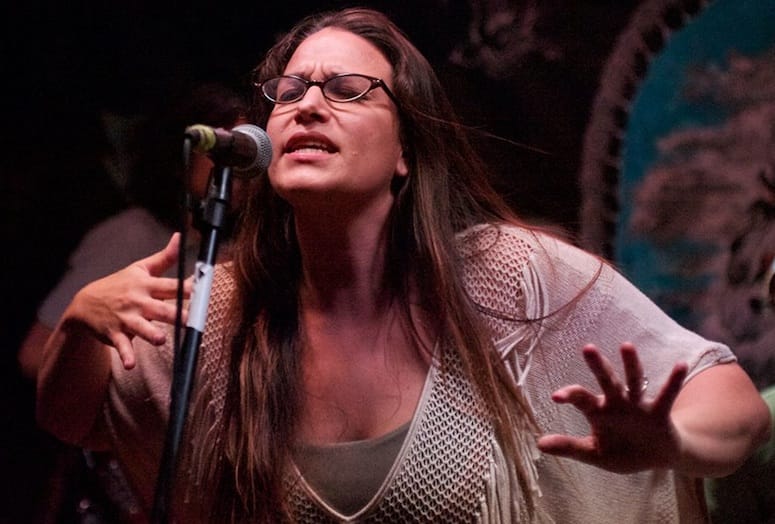 Juli Crockett and Lisa Dee met while working in a LA’s trendy Silverlake neighborhood for an Internet sex toy company.

During a business meeting where employees were asked to name the new manufacturing wing of the company, Crockett shouted out “Evangenitals”.  Everyone laughed, and the ladies agreed it would make a great band name.Whenever she was bored at work, Crockett utilized her computer skills to create a website for an imaginary band, “Evangenitals”.

Pulling Dee in on the fun, she would post photos of their vacations, calling it their “tour” and write fake band posts.

Then fantasy became reality Christmas 2003 when the two women performed at an open mic at Mr. T’s in Highland Park as The Evangenitals. Photo Courtesy of The Evangenitals

Juli Crockett describes the group's latest album, Moby Dick, as "a concept album, to be listened to from start to finish."

The group now has expanded beyond just Crockett and Dee. They jokingly admit that almost every musician in LA at one point and time has played in the group.

The Evangenitals have found a welcome mat at Pappy & Harriet’s, which has invited the group back to headline at 8 p.m. Dec. 26 in Pioneertown. Admission is free.

Do you enjoy being in your band?
“Our band really started as a joke and nobody truly expected it to keep going, but Lisa and I are best friends, and this is how we hang out. It’s one of the secrets of our enduringness. There was no seriousness about ‘making it.’ It was just a cool way to go on vacation! We went through a middle phase of ‘We got to go pro!’ and we were touring and playing, but 98 percent of what I was doing was business and it kind of drove me crazy. Then I got pregnant, and I played 200 shows until I was eight and a half months, had the baby, and then we took a break. That’s when we started recording our [latest] album, Moby Dick.”

Have you played out at Pappy & Harriet’s before?
"Oh yes, I think we are one of Robyn’s [one of the owner’s] favorite bands. This is the longest we’ve gone in a while not playing there. We used to play there every three months. Love that place, it’s one of our favorite places to play. We have our posse out there."

Any favorite audience moments?
“At Pappy shows there was this super grumpy 75-year-old man that was just sitting there and he goes, ‘When are you starting? I came here to see The Evangenitals! I watched your videos online. They were really great!’ I love people. We have the most random fan base. Lisa’s favorite was this woman brought her 10-and 8-year-old daughters to see us, and they were right at the front of the stage rockin’ out! Like Rock Camp for girls, they were so excited and inspired. They took pictures with us. We just love it.” How did you wind up on Portland’s “Fluff & Gravy” label?
"In 2009 we played in Portland with a band called Whistle Punk. Two of the guys, Chad Landing and John Shepski, were in the band and then started the label. We remained Facebook friends and watched them over a few years build it up. We have so much material it’s ludicrous. When we play Pappy & Harriet’s, it’s like a three-hour show with 95 percent original material. We started putting songs together for our fourth album and three songs were inspired by Moby Dick. God bless Fluff & Gravy for being down when we said, ‘We want to do a concept album about Moby Dick!’”

How did that pitch session go?  Obviously you got the record made…
"Yes, but they have all Roots and Americana music on their label, but I knew personally that John and Chad are huge fans of Ween, my favorite band. Somewhere between alternative country and Ween lives our Moby Dick album. As a label I love them. They had agreed to release it having heard nothing. The record really is a concept album, to be listened to from start to finish. It has a really intricate soundscape. It’s not their usual, so it will be a cult thing."

You have a wildly talented group.  Who is in your current lineup?
“I’m humbled and grateful that I get to play music with the people I play music with right now. Lisa Dee was an opera singer, Joey Maramba (bass) plays with John Cale half of the time, Will Logan (drummer), Daniel Mark (mandolin) plays with Dustbowl Revival, Andrea Baker (fiddle) is doing solo violin for the Moth [radio series] and goes from playing at Nokia theater to playing with us, Michael Feldman (keyboards), and Ari Desano (accordian). I fall so deeply in love with them watching them play.”

Which works because your husband is in the band!
“Yes, Michael Feldman! I love you!”