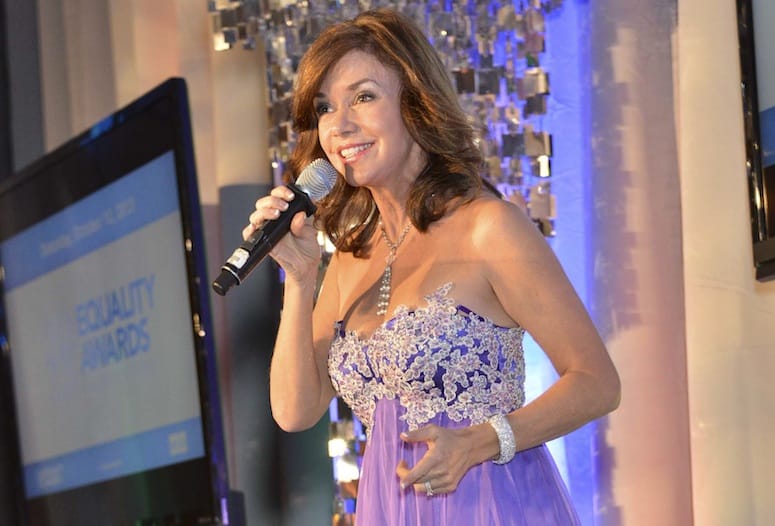 The youngest of five sisters, Bobbie Eakes’ childhood included putting on shows for family and friends, but her musical roots were inspired by her father’s morning routine.

“My dad was in the Air Force and kind of disciplined, so every morning he would blast music to wake us up,” Eakes recalls. “He would play fun songs from like 'The Fifth Dimension’ and we would all dance and sing.”

Eakes’ love of music and her acting charisma have led her well beyond the microphone. She may be best known for her roles on the soap operas All My Children and The Bold and The Beautiful.

She also recently appeared at the Cinema Diverse in September for the screening of Southern Baptist Sissies at Camelot Theatres. Eakes played Mark’s mother in the screen version, and has worked for director Del Shores before in the television version of Sordid Lives.

“As the World Turns”

Among her many accomplishments, you may not know that:
•    She was once a magician’s assistant.
•    She was host to shows on country music television’s, Great American Country.
•    She was crowned Miss Georgia in 1982
•    She was the lead singer for the 1980’s dance pop group, Big Trouble, with a hit single,  “Crazy World”

“Days of Our Lives”

Eakes and her husband of 21 years, actor and writer David Steen, took up residence in Palm Springs a little over three years ago – a move that has kept her busier than ever.

In addition to starring in several Internet-based series including the role of, Katherine ("Kitty") in The Grove: The Series, produced by Crystal Chappell, Eakes is thriving in what she describes as a “wonderful community with a whole valley that has something going on all the time.”

Eakes has also embraced the social aspects of the desert lifestyle and says she seems to do more here. She is active in supporting local charities including Desert Aids Project and most recently sang at the Equality California awards show at The Riviera Palm Springs.

Eakes will appear Nov. 8 at the Annenberg Theater in Palm Springs to star in her own show, “Turn the Page”.  Appearing one night only, Eakes will sing an eclectic mix of upbeat songs including blue grass, rock and jazz with a few ballads in keeping with her diverse taste and talent in music. There will be dancers, a montage, celebrities, and musical guests including “The Cars” lead guitarist, Elliot Easton, who will sit in for a number.

“It’s going to be a very entertaining, high energy show with a little bit of everything including some surprises,” she says.

While she is hesitant to reveal all of the evenings planned festivities, Eakes is thrilled to honor her commitment to the community and has invited the Palm Springs High School “A Capella” players to accompany her for a set.

“I feel blessed with this really interesting journey,” Eakes says. “It didn’t go exactly as I envisioned it. I really didn’t intend to focus on the acting part as much as being a singer. I first moved to California to be a recording artist. But being a singer helped land acting roles and now, I feel I have come full circle and can showcase my singing.”