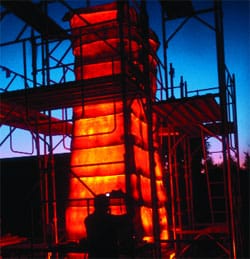 In a cold, dark December night, a crowd has gathered in the parking lot outside Imago Galleries in Palm Desert. People view what looks like a miniature skyscraper punched with rows of  rectangular windows. Actually, it is a 9-foot clay sculpture. From deep within, the structure begins to glow orange-red. As its light expands, the entire space takes on an eerie intensity, a life of its own. The glow brightens, rousing from the crowd an excited murmur that turns into a football cheer.

Fred Olsen has done it again. The ceramic artist is renowned everywhere except in his homeland: the Coachella Valley. Here — as in Germany, Italy, Denmark, Switzerland, Greece, and Wales — Olsen has built a complex kiln and fired it in place, as if the kiln itself were a sculpture. Olsen gives it a mythological spin.

“The chamber kiln is more than just a kiln,” he says. “It’s a monolithic structure that lives and breathes fire.”
Building the kiln occupied about a dozen people over the course of three days and took six days to fire and cool. Olsen designed the firebox on which the sculpture is built. A wood fire built on the firebox creates the gradual glow from inside. An insulated ceramic-fiber blanket is wrapped around the sculpture to temper heat. Calculating exactly when to unwrap and allow the sculpture to begin cooling is key to a successful outcome. The sculpture could explode from overheating or crack and crumble before it has time to set thoroughly.

In ceramics, process is a critical element of success and is as important as the finished art form. Ceramics requires as much engineering knowledge as creative artistry. Olsen is the father of the modern fired-in-place project, where the outcome is a virtual unknown.
|
His Imago project, a fundraiser for Palm Springs Art Museum sponsored by the Museum Associates Council, was a piece of cake compared to one in Nove, Italy, where Olsen was teaching in the summer of 2004. His student team had constructed a 16-foot tower and treated it with thrown sawdust, making the largest Raku-fired piece ever created. The sculpture stood waiting to be unwrapped.

“There is always a sense of adventure in the unwrapping,” Olsen explains. “But this time, a life-and-death element presented itself: A major thunderstorm was on the way. The metal knives and hooks we use to unwrap could become lightening rods. Our dilemma was whether to go for it or wait and hope the storm would pass. Compounding our problem was the necessity to move the blanket correctly the first time. Otherwise we might not be able to get close again until after the piece cooled, which would change the dynamic entirely.

“We fired for two-and-one-half days. On the day for unwrapping, the rainstorm came in with high winds. Because we had planned for 14 hours of holding temperatures, it came out all right. These projects do depend heavily on good engineering.”

The many-faceted nature of modern ceramics requires the broad skills and vision of such an artist as Olsen. Ritchie White, professor of art at Saddleback College, has long been an ad-mirer. “Fred is the world’s greatest authority on kilns,” he says.

The Kiln Book, authored by Olsen, has been a bible to potters worldwide since being published more than 30 years ago and is now in its fourth printing. Olsen was the first to show how to build kilns that had practical potential for studio potters. Before glasnost, the book was a coveted, clandestine manual for potters in the former Soviet Union.

“There isn’t anyone in the world who can do what he does with a kiln,” says Susan Peterson, a well-known ceramicist and Olsen’s former teacher at the University of Southern California. “He is a master at controlling the ceramic surface during firing. Since the late 1950s, Fred has devoted his life to understanding combustion.”

After Peterson, Olsen studied with master potter Tomimoto Kenkichi in Kyoto, Japan, in the early 1960s, thus following the lineage of the Kenzan Masters. He was the first Westerner to attend Kyoto City College of Fine Arts Ceramic Center. In the 1960s, he studied with Pablo Picasso in Vallauris, France, but left feeling Picasso’s talent was more at home on canvas than with clay.

Over the years, Olsen’s travel experiences — as well as the environment of his Pinyon Crest studio/home — have been reflected in his ceramics. One group of his vessels shows the effects of wood firings, the distinctive marks of pinyon ash. Others exhibit the pockmarks and rivulets of a salt firing. The shapes often hearken back to his love for pre-Columbian art, which he collects. Returning to porcelain work in the 1980s, he designed bowls balanced on three legs.

In the 1990s, kiln building became an important workshop activity prior to ceramics conferences. A July 1996 conference in Canberra, Australia, found Olsen building a kiln to be painted by aboriginal artists from an island off the northern coast. Besides kiln art, there was kiln music. The audience was treated to a concert during firing: Olsen had designed the flue to produce sound.

Because his heritage is Danish and he has family living there, Olsen frequently travels in Denmark. The design for the kiln he built on a site outside Copenhagen was influenced in part by French artist Jean Dubuffet, whose work is a prominent part of the nearby Louisiana Museum collection. Another time, Olsen enclosed the stark white of Danish village thatched-roof cottages and tall-steepled churches in a white kiln at the Guldagergaard Museum of International Ceramic Art in Skaelskor.

In Copenhagen, his collaboration with Nina Hole in a fired-in-place event for the Biennale in the King’s Garden attracted more than a thousand spectators. Earlier that year, he built a cross-directional kiln at the University of Edmonton in Canada, a collaborative construction involving about 40 students and artists participating in an International Wood Fire Conference.

Since prehistoric times, potters have fired their wares with whatever materials were available. But Olsen has gone further, raising the design to an art form while maintaining its functionality. He combines the high-grade aesthetics of a master artist with the brains of an engineer. And fire punctuates this wondrous alignment of artistic talent and mechanical expertise.

Olsen also is an accomplished creator of elegant, thin-bodied, wheel-thrown bottle forms. He throws every vessel in one piece to assure purity of form in a single unbroken line. Each bottle has a distinctive asymmetrical neck.

“If we were to place Fred in a historical context, it would mean going back to Zen Buddhism and the Japanese tea ceremony,” White says. “He continues a tradition based on restraint, humility, and subtlety. He
performs a ritual of grace and in his art captures the beauty of everyday things.”

In contrast to his wood-fire works, Olsen produces refined porcelain bowls and delicate, lidded boxes decorated with meticulously etched and underglaze-colored motifs drawn from the landscape surrounding his property. His sensuous, semi-abstract sculptural pieces have evolved from the porcelain containers. Olsen
teaches workshops and holds firing conferences worldwide. He has carved his own personal niche in the world of modern ceramics.

“He is not a superstar in his own back yard only because he has focused less on trying to exhibit his work here and spent more time developing his lucrative international business of kiln making,” White says, explaining that economic pragmatism can trump an artist’s focus.

Modest and unassuming by nature, Olsen works within a defined ceramics tradition, but he is breaking new ground with his fired-in-place process. Repeated around the world, the events combine art performance, art process, and art as an end product. Ceramic artist and author Sara Hakkert views it as a “happening.”

“The days of preparing the clay, constructing the walls, solving problems and later feeding the fire day and night proceed in an orchestrated way and take on the appearance of a performance. Each person undertaking his task in harmony and cooperation helps create a communal experience. Even the onlookers, other artists, and visitors come to take in the progress every day. The bustling presence of active as well as passive participants creates a progressive happening for all.”