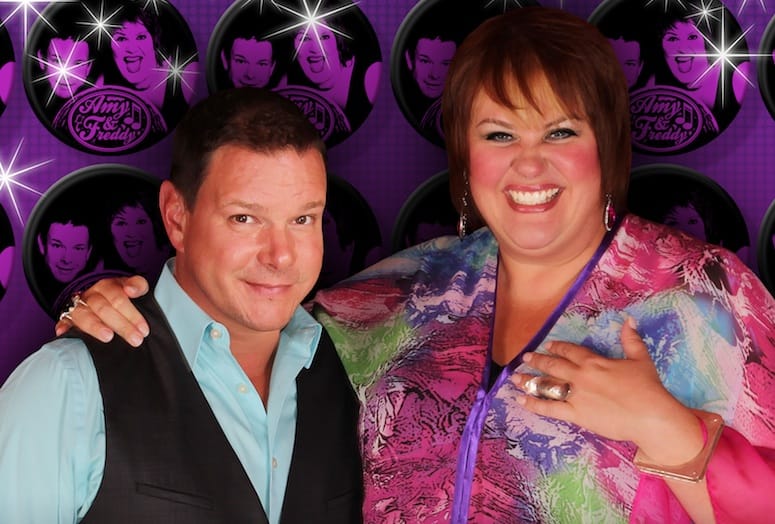 Amy Armstrong and Freddy Allen have a special life-changing event to attend with two very important roles to play.

Freddy is getting married to his partner, Matt.

Amy, an ordained minister, will officiate the ceremony.

She will have the honor of marrying her best friend and music partner. The duo have shared a musical marriage for 18 years. “We love each other,” says Amy. “I’m very grateful that I have Freddy in my life. I’m very happy he’s getting married to a special person. We are very protective each other.”

Freddy concurs, and says, “There is nobody else in this world that knows me better than Amy. We’ve been through a lot together. She’s my beautiful voice, my musical soul-mate.”

While excited about Freddy’s upcoming nuptials, this 'dynamic duo' has built a successful entertainment career as “Amy and Freddy”. Their talented cabaret style song and comedy show has captivated audiences around the world, dazzled by their sassy style and teamwork.

They will stop in Palm Springs, prior to Freddy’s wedding, to entertain July 18-19 at Copa Palm Springs.

The two have shared the stage and their lives, combining Amy’s huge vocals, edgy humor, and quick wit with Freddy’s impeccable musical arrangements and piano skills. Since first meeting in Chicago, their connection and infectious repartee came through.

Freddie reminisces, “When I first saw Amy on stage, I had just finished my own set, and she was over 6 feet tall. Her hair, makeup, jewels. She was beautiful. And I thought she was a drag queen.”

Freddie continues, “But then ‘Holy Cow’ she could sing. I found out she needed a pianist and we decided to meet. She drove up in a truck wearing overalls, like an engineer and I thought, ‘Well, she’s a lesbian’.”

Despite first “wrong impressions”, Amy and Freddy both maintain, “Music brings people closer together. It’s a bond that never goes away. It’s always there.”

The pair also connect through their love of laughter and their desire to make audiences forget their troubles if only for a few hours. In fact, Freddy is a huge practical joker.

Amy says, “I might be the loud one but he does crazy stuff. He’s done stink bombs during shows. One time on April Fools’ Day, he played the wrong key on every song until my voice was breaking.”