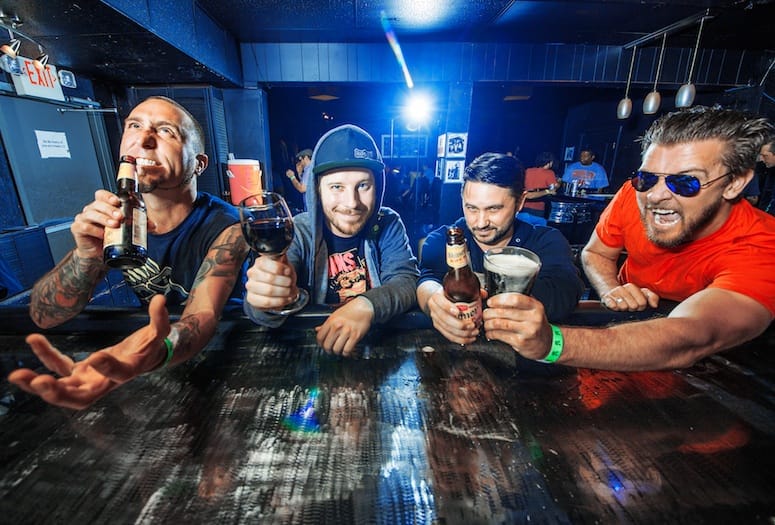 In 1994, guitarist Bill Marcks sauntered into a local bank.

Frustrated, he and his friends knew they had to pick a name for their new band. Just then, he gazed up at one of the bank screens to see a brightly lit word "Authority" with a blinking "0" next to it.

A smile slowly formed on his face.

Punk rock rebels Authority Zero have survived many line-up changes in its 20-year journey. Original member Jason DeVore is still the driving force to keep the band together, though Marcks and others have moved onto different paths. DeVore (pictured at right) took a moment from his busy tour schedule to talk to Palm Springs Life.

Your band name has a great punk rock feel to it, has it changed meaning throughout the years?

“As with most band names is stemmed from something simple and silly and came to mean a great deal to us. I'm glad we didn't stick with ‘Jerry's Hair’.”

Your albums are described as a mixture of "punk & reggae", but there are also "Portuguese & Spanish" influences. Where does that stem from?

“Many of those influences stem from the environment in which we live in the southwest of Arizona. Majority was influenced by guitarist Bill [Marcks] as he studied it abroad and brought much of that into our music."

What is your favorite song to play live that best reflects this mixture of influences in your music?

“I think I would have to say as of late Today We Heard The News off The Tipping Point. It's kind of all encompassing and a bit of a roller coaster."

You have toured with Sum41, Everclear, and Guttermouth. Have you had any "hero" moments performing with someone you've always admired?

"Man, the list is seemingly endless. We've had such a blessed opportunity to tour with and befriend so many bands I've grown up admiring and respecting. Pennywise, Rancid, No Use For A Name, Nofx…the list goes on and it's great to see all of those groups still out there hitting it hard."

Since you live in Arizona, does the desert influence your work or any songs on your recent album?

“The new album, The Tipping Point. It most definitely does as with all the records. There are always politics to reflect on and events occurring right at home.”

Have you performed at The Hood or in the Coachella Valley previously?

“We have not yet! Looking very forward to it just as every show and stoked to break some new ground there. As I say, always enjoy meeting new people and playing a new place.”