Autism Awareness Increases Thanks to Desert Concert in Indio 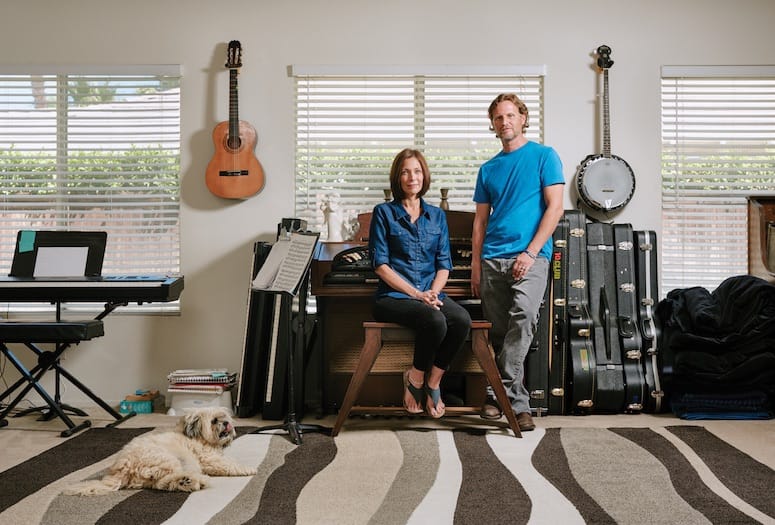 Josh and his wife, Linda Lemke Heinz, have planned Concert for Autism for Oct. 18–19, at the Tack Room Tavern in Indio.
PHOTOGRAPHS BY NATE ABBOTT

As the father of a young son with autism, musician Josh Heinz leveraged his local music connections to organize a grassroots concert that would increase awareness of the developmental disorder, cultivate a sense of community for parents like him, and support children like his son, Harrison. They drew a crowd, raged hard, passed around a donation bucket, and gave the proceeds to the Coachella Valley Autism Society.

In the 12 years since he staged his first Concert for Autism, Josh’s charity event has grown into a two-day extravaganza celebrating different music genres and championing neurodiversity. It also led to romance. “I wanted to channel my music into something for the community,” he says. “Love was the last thing I expected.”

In retrospect, it seems inevitable that Josh and his now-wife Linda Lemke Heinz, who also has a son with autism, would meet and make beautiful music together. The autism community in the desert is relatively small, so most parents know each other. In 2009, she and some friends attended a show by Josh’s band, Blasting Echo. There’s even a photo that was taken of them together that night, although the pair didn’t actually have a conversation.

Their paths crossed again months later at a support group meeting for parents of autistic children. It was held at Pump It Up, a now-defunct indoor play area in Indio, where the kids could engage in physical activity while adults talked and shared information. Linda and Josh’s sons are the same age and were in the same class at school.

“My son would talk about ‘Harrison, Harrison, Harrison,’ ” says Linda, who teaches voice, piano, and flute, focusing mostly on children with autism. A schoolteacher had mentioned to Linda that she should meet Josh, who’d been offered similar advice by his friends.

At the support group, Linda’s son, Christopher, immediately ran off with Harrison, leaving the two parents alone. “My mind connected the dots,” Josh recalls. “This is the woman I had heard so much about.”

Linda began helping out with the concert, and she and Josh have been together ever since. For the past decade, she’s served as the event’s co-organizer and even became Blasting Echo’s keyboardist. They have been married for five years and have five children in their blended family: Christopher, Harrison, Gillian and Katy (daughters from Linda’s previous relationship), and 5-year-old Jack, their child together.

• See our 2014 story and video on the band, Blasting Echo, featuring Josh Heinz.

Their Bermuda Dunes home is filled with song — a living room overflowing with instruments and sheet music. “The benefit is great for what we do, and we’re passionate about helping other families, but the awareness is the real key,” Josh says while curled up on a love seat with Linda. “We want people to know about autism.”

“Some kindness [and] empathy goes a long way,” Linda adds. “Just trying to understand autism helps a parent so much. When somebody gives you a dirty look or makes a comment about your child, it’s like kicking you when you’re already down.”

Last year’s Concert for Autism grew significantly from Josh’s original vision. It featured 24 acts — ranging from rock and reggae to blues — over two nights and two stages, plus activities like face painting, a silent action, and a photo booth.

For this year’s event, Oct. 18–19, at the Tack Room Tavern in Indio, plans call for a sensory tent for the children, in case the concert environment becomes too overwhelming, with relaxing spots, cool lights, and manipulative devices for play.

“It has ballooned into something way bigger than we ever imagined,” Josh says. 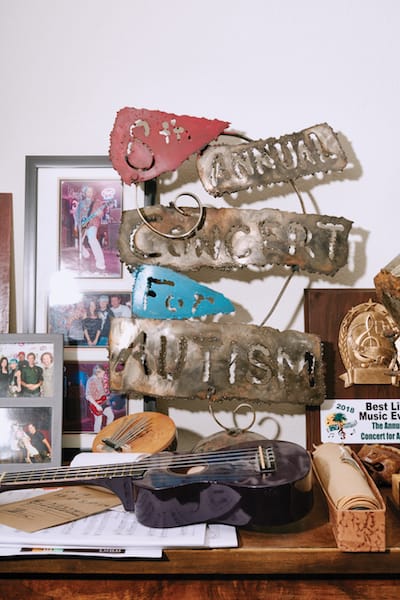 The Heinz’s Bermuda Dunes home is filled with instruments and sheet music.

Proceeds from the concert go to the Desert Autism Foundation, which helps make essential therapies more affordable for local families raising a child with autism. In the 11 years since Josh organized the first event in Palm Desert, the autism spectrum has become much more understood, and more resources are available in the Coachella Valley.

However, there are also more children being diagnosed with autism. A 2007 report from the Centers for Disease Control and Prevention and the Autism and Developmental Disabilities Monitoring Network showed an autism prevalence of 1 in 150 children; by 2016, the same report showed a prevalence of 1 in 68 children.

“I didn’t even know some of these early intervention therapies existed or how much they helped until I met Linda and saw how they benefitted Christopher,” Josh says. “If we can give those vital therapies to other families, it’s all worth it.”

As for the concert’s future, only Josh and Linda know how much this baby will grow. “Maybe another city? I’ve thought about adding nights, making it three to four days,” he says. “But Linda says if that happens …” She laughs and finishes his sentence: “Divorce.”