Author Kathryn Sermak will appear at Just Fabulous in Palm Springs Dec. 2 to promote her memoir of the last decade in the life of acting star Bette Davis.
PHOTOS COURTESY OF KATHRYN SERMAK

When Kathryn Sermak was summoned to work for Bette Davis, she had no idea who she was so she brushed up by reading the actress’s 1962 memoir, The Lonely Life.

A surfer girl from Southern California whose previous employment as personal assistant for HH Princess Shams Pahlavi made her uniquely qualified to be constant aide for the fabled movie queen, Sermak and the lady she called Miss D struck a close friendship during the 10 years they worked and traveled together, assuring Davis she would not be lonely for the rest of her days.

Now with a new generation discovering the late screen icon thanks to the success of the FX series Feud: Bette and Joan, which documented Davis’ alleged rivalry with Joan Crawford while the two filmed the classic chiller What Ever Happened to Baby Jane?, there’s renewed interest in her personal life, as well. 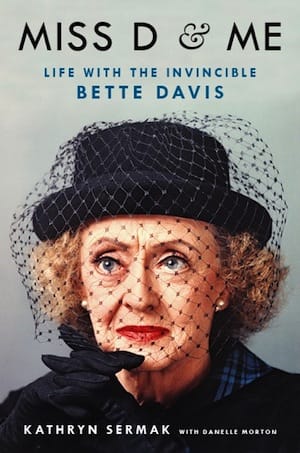 Sermak has helped quell the need by publishing a memoir of her own. Miss D & Me: Life with the Invincible Bette Davis (Hachette Books, $27) which details the last decade in the life of the great star when Sermak was mentored by Davis and witnessed her unflinching work ethic and personal style before the actress died of breast cancer in 1989.

Sermak spoke with Palm Springs Life about working for the legendary star, the truth about the famous feud with Crawford, and how her public image differs from the Davis she knew.

Palm Springs Life: You worked as Bette Davis’ assistant both while she made movies and in her daily life. How different was she on film sets than in real life?

Kathryn Sermak: She was the same person, but when you’re home, you’re home and when you’re at work, you work. There’s a different demeanor. She loved film. She, by the time I worked for her, had 50 or 60 years experience, more than most of the other people in the set. There were no games and laughing and there was a good reason for that. She said you stand by me and talk to no one. The crews adored her because they knew she knew her craft.

PSL: Due to the popularity of the TV series Feud: Bette and Joan earlier this year, there has been a lot of speculation about how the alleged rivalry with Joan Crawford began. What caused it in your opinion?

KS: First we should discuss whether it’s true or not. I can only tell you what Miss Davis told me. She respected Joan and said she was a total professional. The two actresses she said she’d never work with again were Miriam Hopkins and Faye Dunaway, but not Joan Crawford. Warner Brothers created the feud for publicity. The reason I know is I have photographs of the two of them. One thing that made her uncomfortable is Joan would send her gifts. She was sending her gifts every day. There was also Franchot Tone. Miss Davis had a crush on him and had made a film with him [1935’s Dangerous, for which Davis won her first best actress Oscar]. She said when he came back from lunch he still had lipstick marks on him from Joan. But that’s not what created the feud. It was done for publicity and they made a fortune off of it. Then when Miss D was up for the Oscar for Baby Jane and this was one she really wanted to win, Joan went around to the other nominees offering to accept the awards if they couldn’t attend.

PSL: How do you think she’d have felt about the depiction of her?

KS: Miss Davis would say, “Thank you very much.” It introduced Miss Davis and Joan Crawford to a whole new generation. Young people are turning on Turner Classic Movies. She’s gotten a lot of fans because of it. She has a Facebook page followed by a million people. Young kids email me who’ve seen more of her films than I have.

PSL: How accurately did Susan Sarandon portray her?

KS: I couldn’t say, as I was only seven when Miss D made that film. What I can tell you is the Miss D I knew and work with for 10 years and being with her on all those film sets is not the one I saw portrayed in the Feud. Miss D was highly professional, always on set an hour before her call time with her legal pad, going over every detail and discussing things with the director, stagehands, etc.

PSL: Which of her film performances seemed most like the woman you knew?

KS: Unfortunately, I have not seen all of Miss D’s movies, as we were always busy working. I did see enormous amounts of film clips from all the award shows where she was honored for her career. Miss D was an actress while filming and played that character. Once we left the set, she was Miss D, a New England Yankee, as I stated in my book. She loved her family, cooking, and her home when not working on a film. She was not reality TV like we have today. Miss D was a real person who acted parts; she never played herself from what I have seen.

PSL: What about her would most surprise people who think they know her from her films and television appearances?

KS: I think most people might not know the fun-loving side of Miss D. She would play practical jokes on friends.

PSL: Since you’re signing your book in Palm Springs, I wonder if there are any stories about Miss D and her visits to the Coachella Valley.

KS: She would go to La Quinta a lot. Our hide-a-way was at the home of Helen Ann [a painter Sermak had introduced to Davis] over in Rancho Mirage. I tell this story: Aaron Spelling sent a driver with five-dozen red roses down and the script for Hotel [a TV series Davis appeared in in 1983] to Miss D. She looked through the first pages and had me call get Aaron. I gave the phone to Miss D and she said, “Aaron, I don’t believe you wrote this script. But next time you take that money you spent on the limo driver and roses and you give it to the writer and have him write me a better script.”

PSL: That sounds like quintessential Bette Davis. Did she enjoy Palm Springs and Rancho Mirage?

There were times we would go out. She loved watching Helen Ann paint. When she was a lot younger — like in her 20s and 30s — La Quinta was a big place. I have home movies of her in La Quinta with her sister Bobby and their mom so I know she did spend time out there.

PSL: How has your book been received by Miss D's other family members and people who knew her well?

KS: This book had Miss D’s blessing from her son, Michael, and the people who knew her — RJ Wagner, Olivia de Havilland, Stefanie Powers, Ann-Margret, George Hamilton, and Greg Gorman all gave quotes which are listed on the back cover of our book.

PSL: What do you hope people learn about Miss Davis from your book?

KS: I think the way people started to view her after she passed, it was more about the characters she played. I think Miss Davis was a very, very private person. I think in my book I show you the Miss Davis that’s not the characters; she’s the every day Yankee woman. She believed women should support other women. She was great.