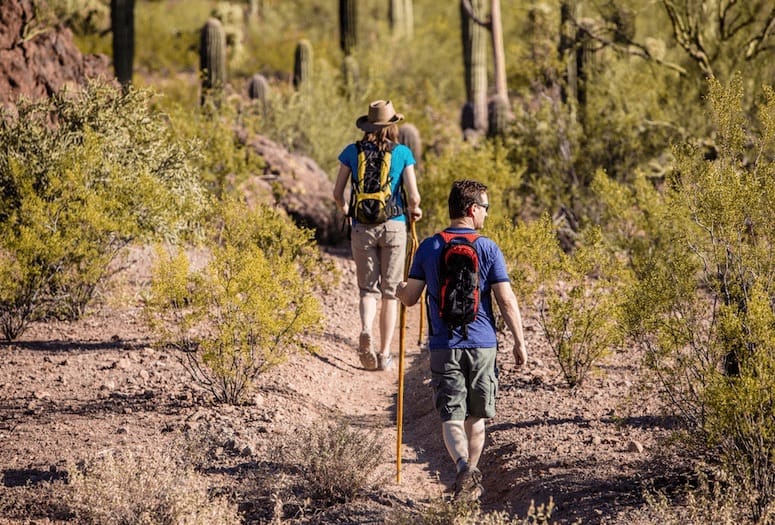 In his new guidebook Day Hiking Trails of Palm Springs and the Coachella Valley, hiking expert Rob Bignell explores 32 area trails, ranging from Mount San Jacinto to the Salton Sea’s southern shore. Bignell shares his four must-hike trails that you can conquer in a few hours.

Towering a full 1.95 miles above Palm Springs into the sky, San Jacinto Peak is the sixth highest in the lower 48. A number of routes allow hikers to ascend the mountain, but the most popular (and easiest) at 11.5 miles (round-trip) is San Jacinto Peak Trail accessible via the Palm Springs Aerial Tramway. On clear days, the Pacific Ocean is visible to the west.

There’s a waterfall outside of Palm Springs — yes, really! — on the Murray Canyon Trail. The secluded walk to the seasonal Seven Sister Falls is a 4.1-mile out-and-back. Be careful: Heading up one of four gorges in the Indian Canyons requires crossing Murray Creek several times, a balancing act on the rocks.

A series of unique mud pots on a clay field dot the southern shore of the Salton Sea. Water bubbles up from multiple sinkholes and gurgles out of fumaroles. A yellow-green bacteria calls one of the puddles home, while a red bacteria resides in another of the volcano-like pots a few yards away. Don’t forget to wear boots.

Coachella Valley’s Hidden Spring Trail boasts a bit of spelunking. While the valley doesn’t have the limestone rock formations that allow for massive underground rooms, it does have the next best thing: grottos. The 5.1-mile round trip hike in the Mecca Hills Wilderness also goes through two oases and past several painted rock canyons.

• READ NEXT: 4 Reasons to Hike  the Cactus Spring Trail.