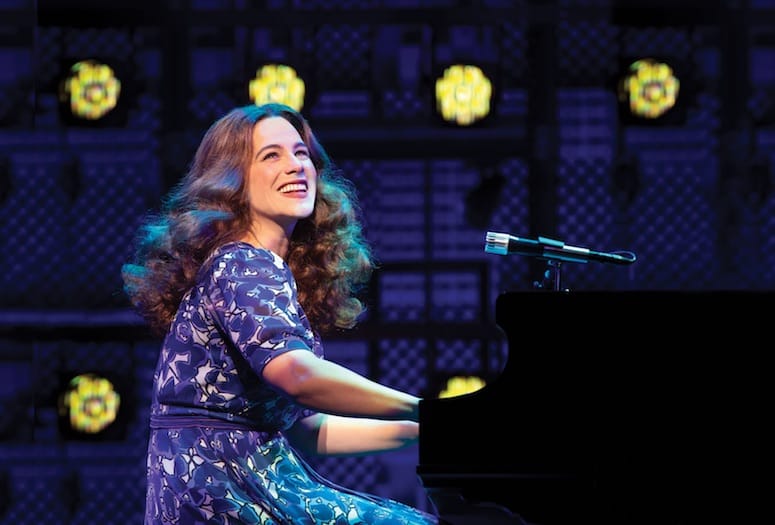 There are certain things in musicals that become iconic. So integral to the central story, these elements are often synonymous with the shows themselves. It may be a prop or a set piece. A wig or even a hit-you-over-the-head metaphor. Musicals are not subtle! Sometimes, it’s just an isolated moment in a sweet love song or the jaw-dropping artistry of a major production number that becomes indelible.

Actually, that could be a fun game — pick a musical and quickly name the first thing that stands out in your memory: the chandelier in Phantom of the Opera, the Miss Saigon helicopter, the red curls and Sandy the dog in Annie, the big red boots in Kinky Boots, and the killer rabbits in Spamalot. How about those gold top hats in the finale from A Chorus Line? Or the neon Broadway signs in 42nd Street and a parody of those same signs in The Producers? And let’s not forget the heinous loaf of bread in Les Misérables that sent Jean Valjean to prison for 19 years. Play along with your fellow Broadway obsessives at your next party; the possibilities are endless.

All of which brings us to the McCallum Theatre 2019–2020 Broadway season. This year is a particularly exciting one because there are five musicals (A Christmas Story, The Musical, Waitress, Beautiful, The Carole King Musical, and Chicago) , and one play (The Play That Goes Wrong) making their McCallum Theatre debut. Each conjures up instant images for those lucky enough to have seen them in New York or on the road.

• READ NEXT: McCallum Theatre Showcases Music in Many Forms. 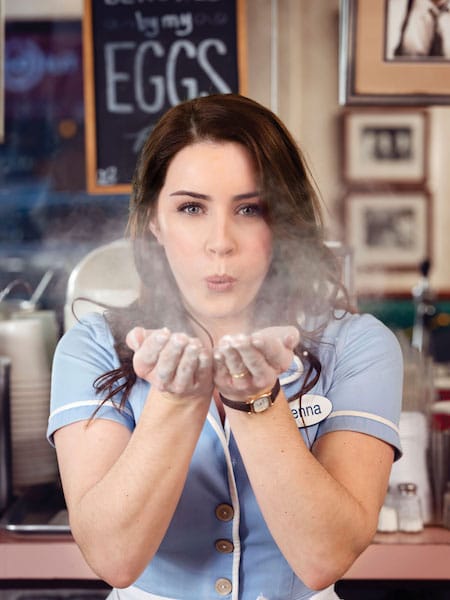 Cheeseburgers in paradise, a prolific hitmaker’s piano, and Fosse’s jazz hands will undoubtedly stay with you when three popular Broadway musicals come to the desert after the holidays. Jimmy Buffett’s Escape to Margaritaville starts the new year off with five performances from Jan. 30 through Feb. 2, followed by Beautiful, The Carole King Musical, also for five performances, Feb. 7-9. And the Broadway season concludes March 13–15, when the longest-running American musical in history, Chicago, returns to the McCallum. But first up, the McCallum is thrilled to present two popular musicals for the very first time in the Coachella Valley: A Christmas Story, The Musical (Nov. 26–27) and Waitress (Dec. 6–8). The Dec. 6 performance of Waitress is presented through the generosity of Jerry and Sarah Mathews.

If you have ever seen the 1983 classic American Christmas comedy film A Christmas Story, your eyes invariably will light up at the mere mention of child protagonist Ralphie Parker, who dreams of his ideal Christmas gift: “a Red Ryder Carbine Action 200-shot Range Model air rifle.”

The gun itself becomes a central character, as the musical  puts this unlikely holiday gift in the spotlight with its own wishful song, sung by our young hero. The aspiring cowboy wants nothing more than to have the Red Ryder appear under the tree, despite alarming protests from adults in his life, resulting in its own rollicking all-singing, all-tap-dancing production number “You’ll Shoot Your Eye Out.”

Like the perennial holiday movie favorite, A Christmas Story, The Musical creates considerable distractions that stand between Ralphie and his Christmas wish, including an infamous leg lamp, outrageous pink bunny pajamas, a maniacal department-store Santa, and a triple-dog dare to lick a freezing flagpole.

The musical version of the movie started its onstage life in 2009 at the Kansas City Repertory Theatre. Oscar, Tony, Grammy, and Golden Globe winners Benj Pasek and Justin Paul (Dear Evan Hansen, La La Land, The Greatest Showman) were hired to re-do the score after that engagement, and the show embarked on a national tour in 2011.

The show had limited runs in New York City in 2012 and 2013 and was nominated for three Tony Awards, including Best Musical, Best Book of a Musical, and Best Original Score. Fun fact: One of the many producers of the Broadway run was former child actor Peter Billingsley, who originated the role of Ralphie in the hit movie.

The original source material for A Christmas Story, the Musical came from Jean Shepherd’s semi-fictional anecdotes in his 1966 book In God We Trust: All Others Pay Cash, with some elements also originating from his 1971 book Wanda Hickey’s Night of Golden Memories. Since 1997, a marathon of the film version titled “24 Hours of A Christmas Story” has aired on TNT or TBS, comprising 12 consecutive airings of the film on both Christmas Eve and Christmas Day each year.

A Christmas Story, The Musical was hailed by The Associated Press as a “joyous Christmas miracle.” The New York Times wrote, “I was dazzled. You’d have to have a Grinch-sized heart not to feel a smile spreading across your face.” 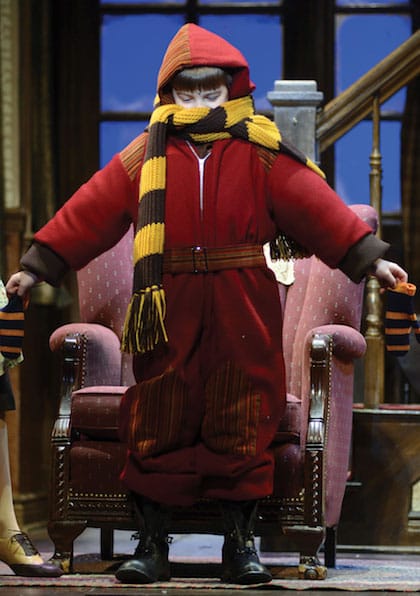 Meanwhile, it’s all about pie in the McCallum’s second musical of the season, Waitress. Those wondrous, sweet creations made from sugar, butter, and flour take their own starring role in the heartwarming, funny, and delicious new musical that makes its McCallum debut in December. Also based on a hit film, Waitress tells the story of Jenna, a waitress and expert baker who enters a pie contest hoping the grand prize will be her ticket out of an abusive relationship to a new life.

The musical has marvelous music and lyrics by pop star and first-time Broadway composer Sara Bareilles (“Love Song,” “Brave,” “Gravity”), including the heartbreaking “She Used to be Mine.” Hailed critically as having an “excellent ratio of sweet to tart” by Time Out New York, the show was nominated for four Tony Awards, including Best Musical, Best Score, and Best Leading Actress (for original star Jessie Mueller, who had previously won the award for her portrayal of Carole King in Beautiful, The Carole King Musical).

You would be forgiven if you left the theater with a hankering for sweet, gooey, caloric pie; the show sets the tummy aflutter right from the get-go with its first song “Opening Up,” which reveals the company getting ready for another day at Joe’s Diner. The pies play a clever role in the number’s choreography and, in fact, original director Diane Paulus set the entire show on a scalloped pie-crust proscenium. 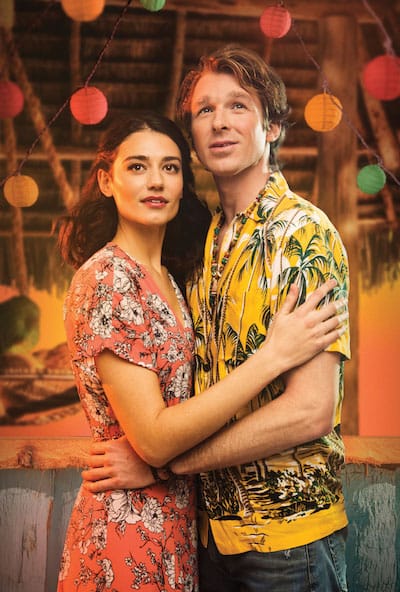 Jenna crafts desserts that mirror her own topsy-turvy life. Among them: “The Key (Lime) to Happiness Pie,” “Betrayed by My Eggs Pie,” “Sweet Victory Pie,” and the “Deep [expletive deleted] Dish Blueberry Pie.” In fact, the Broadway show makes thousands of pies every week (including small ones sold to audience members in mason jars and a tasty bacon-blueberry pie!) and has its own “pie consultant” who advises on everything from ingredients to how to keep the pies fresh onstage.

Along the way, Jenna meets a guy who offers a new start if she can just find the courage to seize it. “Change is on the menu,” according to the show’s creators, “as long as Jenna can write her own perfectly personal recipe for happiness.”

The musical Waitress came to life through the talents of a groundbreaking all-female creative team, including Bareilles (who also played Jenna during the Broadway run), Paulus (Pippin, Finding Neverland), and writer Jessie Nelson (I Am Sam). The role of Jenna has also been played on Broadway by Katharine McPhee (American Idol, Smash) and Shoshana Bean (Wicked), who will be bringing her own show to the McCallum this season on Feb. 4, 2020, along with a nine-piece big band. The Today show’s Al Roker even had a short stint in the musical as Joe, the owner of the diner.

“Waitress is a little slice of heaven,” said Entertainment Weekly, and is “sweet, sassy, and passionate,” according to New York magazine.

Also this season, the McCallum is pleased to present the Coachella Valley debut of the hit Tony Award–winning Broadway play The Play That Goes Wrong, a raucous new comedy described as a hilarious hybrid of Monty Python and Sherlock Holmes. “The funniest play I have ever seen on Broadway or anywhere else,” said Sandy Kenyon of WABC-TV.  The Play That Goes Wrong appears at the McCallum for three performances on Jan. 21 and 22, 2020. The evening performance on Jan. 22 is presented through the generosity of Henry and Carol Levy. 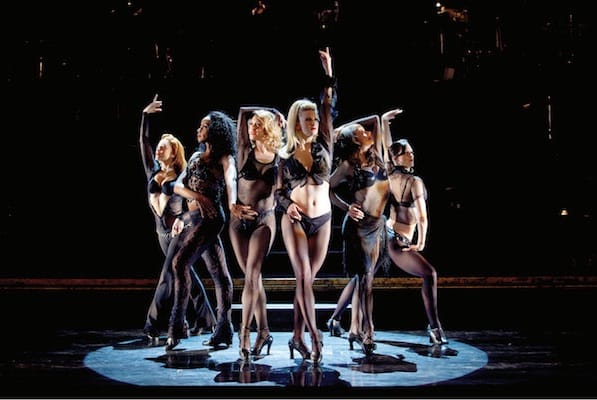 There are memories galore to be had in the new McCallum Theatre Broadway season. Grant your own Christmas wish and get your tickets while there’s still plenty of pie!

A Christmas Story, The Musical

Waitress
(Dec. 6 performance presented through the generosity of Jerry and Sarah Mathews)

The Play That Goes Wrong
(Jan. 22 evening performance presented through the generosity of Henry and Carol Levy)