The original structure on this 2-acre parcel was much smaller when it was built in the 1930s in what is now the Movie Colony in Palm Springs.
PHOTOGRAPHS BY CLINTON MEYER

Of her seven marriages, Woolworth heiress Barbara Hutton was quoted as saying that actor Cary Grant was “the husband I loved the most”, according to a Washington Post article of her passing at age 66 in 1979.

Grant, who was married to his fifth wife Barbara Harris when he passed away at age 82 in 1986, equally spoke affectionately of Hutton, saying “The trouble wasn’t her. People just can’t disassociate her from her money, and they act like idiot around her.”

During their three-year marriage, the couple would often escape Hollywood by renting this house in Palm Springs from promoter Harry Hanbury, who developed the almost 2-acre parcel in 1934 well before the neighborhood became known as The Movie Colony. Located at 796 N. Via Miraleste, the 1930s Spanish Colonial Revival is now on the market listing at $4,500,000.

• READ NEXT: When Hollywood Stars Flocked to Palm Springs.

Hutton’s excessive wealth often cast a shadow on her marriages, including to Grant. The media often referred to them as “Cash and Cary”. Hutton inherited $26 million at 12 years old when her grandmother died in 1924. Hutton was given a decadent and pricey debutant ball in 1930 amid the Great Depression, and she was dubbed the “Poor Little Rich Girl”.

Grant met Hutton aboard a voyage from New York to England in 1939. They wed on July 8, 1942 while the 38-year-old Grant was in the process of starring in the film, Once Upon a Honeymoon. By this time, Hutton, 30, had already been married twice while Grant had been previously married to actress Virginia Cherrill.

The original hacienda was small by today’s standards, which inspired the current owners – designer Richard Tyler and partner Lisa Trafficante – to expand the main house while respecting the 1930s character. 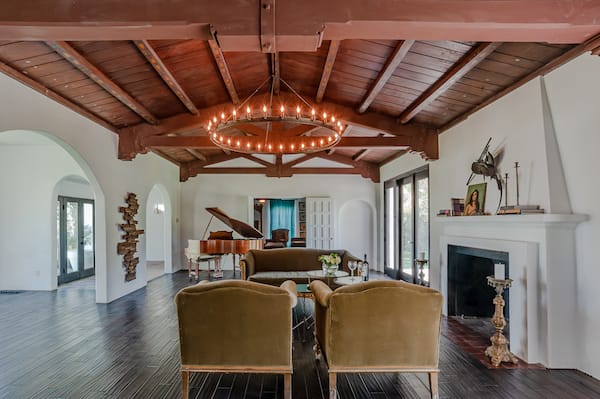 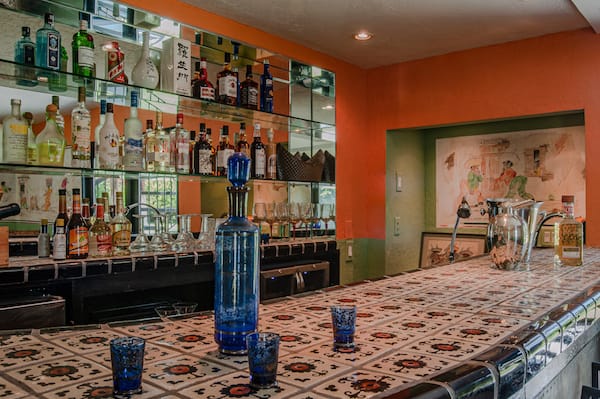 Original features include the living room's beamed ceiling and the the festive "Cantina" with full bar and 1940s murals.

A festive Cantina with full bar, 1940s murals, and a Spanish-tiled fireplace opens to an outdoor kitchen with professional-grade barbecue, wood burning pizza oven and rustic patio bar – all serving the breathtaking pool. Above the Cantina is a private-entry guest suite with a balcony overlooking the estate and beyond. This wing also features two bedrooms and a Jack and Jill bath with a handsome copper tub.

The opposite wing includes a generous bedroom with spa bath and the lofty new master suite with a large bathroom and dressing areas. The master’s secluded roof deck has a 360-degree view encompassing the mountains, tile rooftops, city lights, and the salt-water spa and swimming pool. Beyond the pool is a sunken tennis court hidden by green hedges.

A chef’s kitchen with an enormous island is the heart of the new family wing with a formal dining room, a large living space, and additional rooms. The new wings are completed in a rustic modern style to blend the spaciousness and modern amenities into the historic home.

This veritable compound totals 7,554 square feet and includes 5 bedrooms and 5.5 baths in the main house. The charming original two-story guesthouse adds two additional bedrooms in separate suites, each with living area, kitchen, and bath. The downstairs is decorated in the festive, bright colors of Mexico. The larger upstairs suite has stunning views over the grounds and out to the mountains.

The owners have treasured Via Miraleste as their retreat – “Escaping Los Angeles, we round the bend of the mountains and the world transforms. We enter the gate and our grounds are a magical Shangri-La." 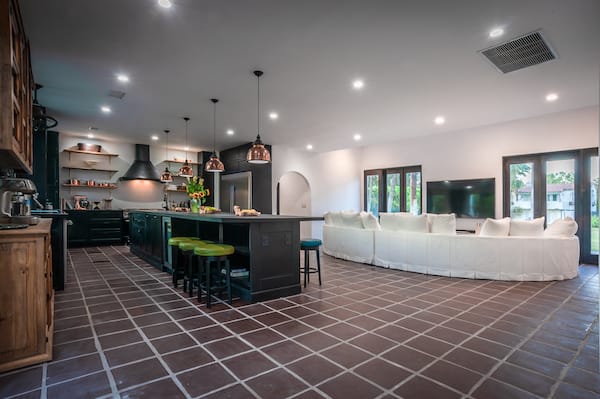 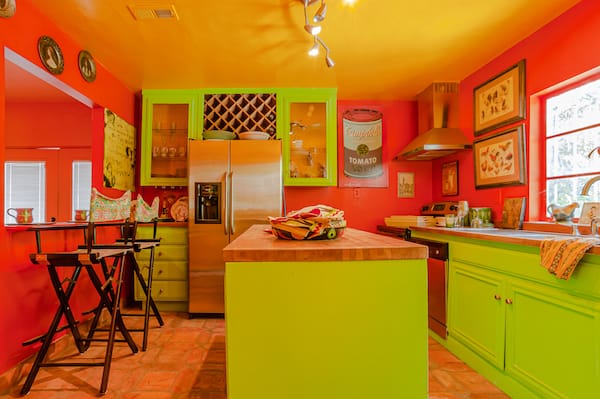 The kitchen of the main house features a huge island, while the lower apartment sports the festive colors of Mexico.

They recall trading tales with Diane Keaton – a client and a lover of California Spanish. At an awards fitting Keaton quipped, “I love your Cantina!” They were puzzled as to how she had seen it; she added that she had hopped their gate to take a peek!

Due to its age and history, the property has been designated a Class 3 Historic Site by the City of Palm Springs. This means that there is an additional layer of review by the Historic Site Preservation Board before major alterations may be undertaken.

VIDEO: View this 7 bedroom, 8 bathroom home that includes and upper and lower apartment.