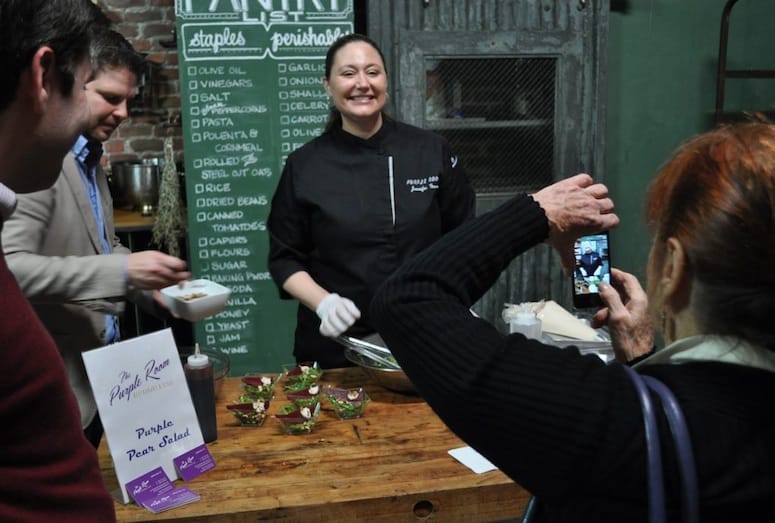 So much so that the executive chef at The Purple Room in Palm Springs has earned a reputation for her culinary prowess in pairing beer with her menus.

“I love to drink beer and I also like to use alcohol in my cooking, I think beer is a bit more exciting than wine,” she says. “My personal preference is to drink beer over wine. Beers have more flavors, more choices, and a lot more options to serve with food.” Coachella Valley Brewery’s Saison L’Automne will be part of the second course.

Town is a frequent guest chef at “Beer Dinners” hosted throughout the Coachella Valley. In fact, her friend, Erin Peters, aka “The Beer Goddess,” has recognized Town as the record holder for being the most invited guest chef at “Beer Dinners” around the desert. Peters, along with well-known local beer aficionado Brent Schmidman, has collaborated to found the inaugural Coachella Valley Beer Week —  a craft beer celebration, featuring festivals, dinners, tours, pub crawls, tastings and meet-the-brewer nights.

To kick off the 10-day event, Peters and Schmidman have asked Town to prepare a special menu for the “Beer Goddess Brewmaster Dinner” to be held Nov. 13 at the Purple Room & Stage. “I’m really excited about Fall spices and flavors,” she says. “I just made some homemade roasted butternut squash ravioli that will pair with Coachella Valley Brewery’s (CVB) Saison L’Automne aged in rum barrels for the second course.”

According to Town, the evening will begin with appetizers and beer tasting during the first hour to offer a rare opportunity to mingle with brewmasters representing six Southern California craft breweries including King Harbor (Redondo), Absolution (Torrance), Escape (Redlands), Black Market (Temecula), Coronado Brewing Company, and Coachella Valley Brewery. She plans to start off the party pairing Coronado Brewing Company’s Senor Saison, a Saison with Mexican sugar, sage and jalapenos, with a scallop ceviche for the meet and greet.

“It will be fun to sit and chat with the people who actually make the beer,” Town says.

During the meal, Town and the brewmasters will talk about their selections, then guests are invited to continue their revelry enjoying entertainment by Jazz singer and pianist Martin Ross. “It’s super exciting. It’s time for Coachella Valley to have its mark on the beer map,” Town says.

For more on the Beer Goddess Brewmasters Dinner, visit www.purpleroompalmsprings.com