It’s not the kind of day one expects in the desert.

Palm Springs, synonymous with sunshine and blue skies, is stormy. The dramatic sky appears to be a patchwork of gray, while the mighty mountains are encircled by wisps of candyfloss clouds. Heavy raindrops inspire the pool water to dance. Creosote scents the air.

“Hey, it’s a perfect day for grilling!” proclaims chef Daniel Villanueva, carrying a tabletop grill to the covered patio of a midcentury home in the Movie Colony neighborhood. He and four other masters of their craft are gathered to take on our date challenge, finding new ways to utilize the Coachella Valley’s iconic fruit.

Villanueva had been joking about the moody weather, but he’s also correct — the shifting sky is an apt backdrop for an afternoon of culinary exploration. Like the weather, the splendor of the date is revealed in unexpected preparations.

Yes, sunshine and date shakes are sublime, but let’s leave those for the postcards. There’s something more interesting, more authentic when things get unpredictable.

Coachella valley chefs are well acquainted with California cuisine. The concept traces back to the 1950s, when chef Helen Evans Brown published a cookbook that was a veritable blueprint for contemporary California cuisine — she promoted fresh, ingredient-driven cooking using food sourced from local farmers rather than supermarkets. 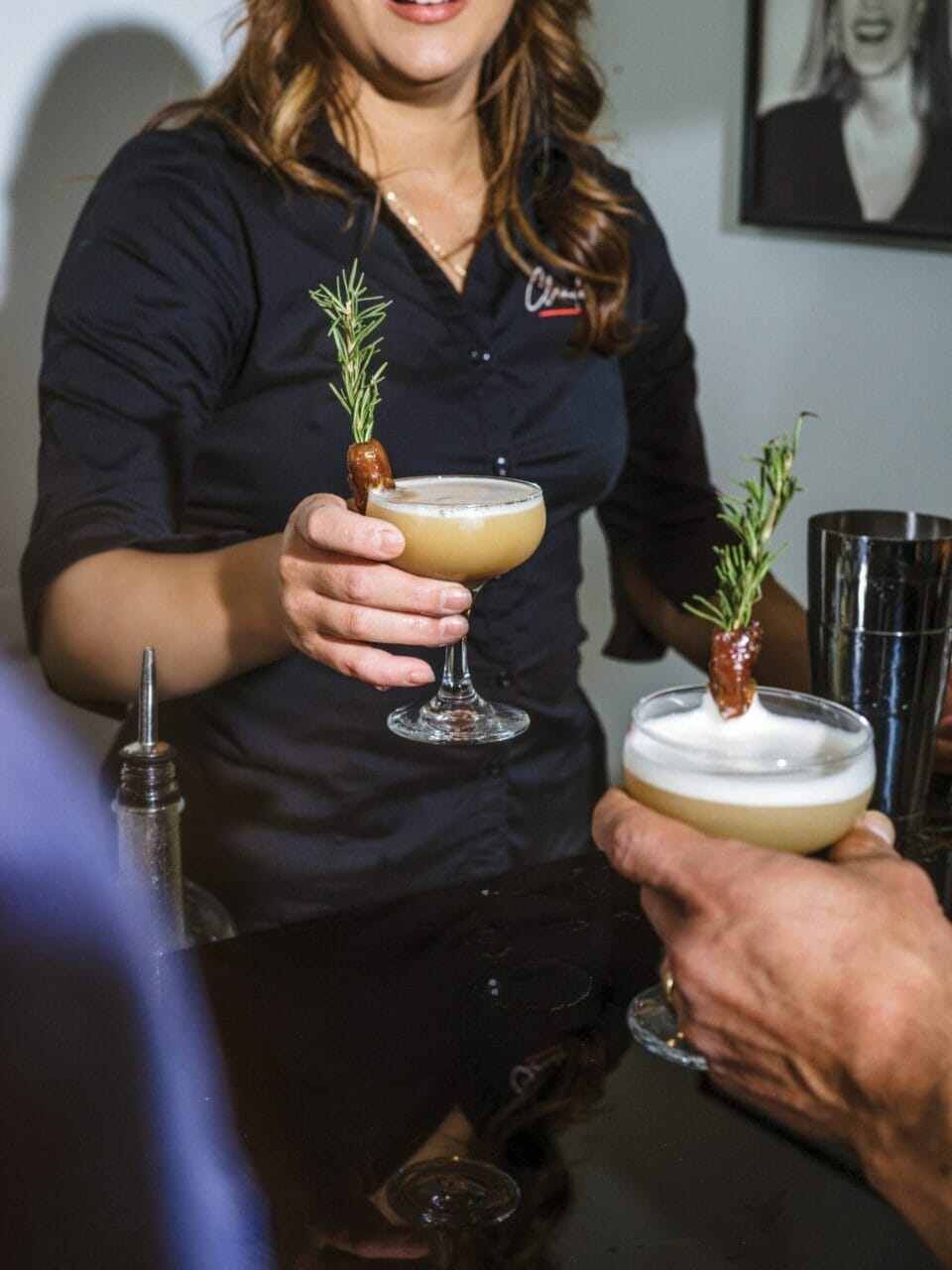 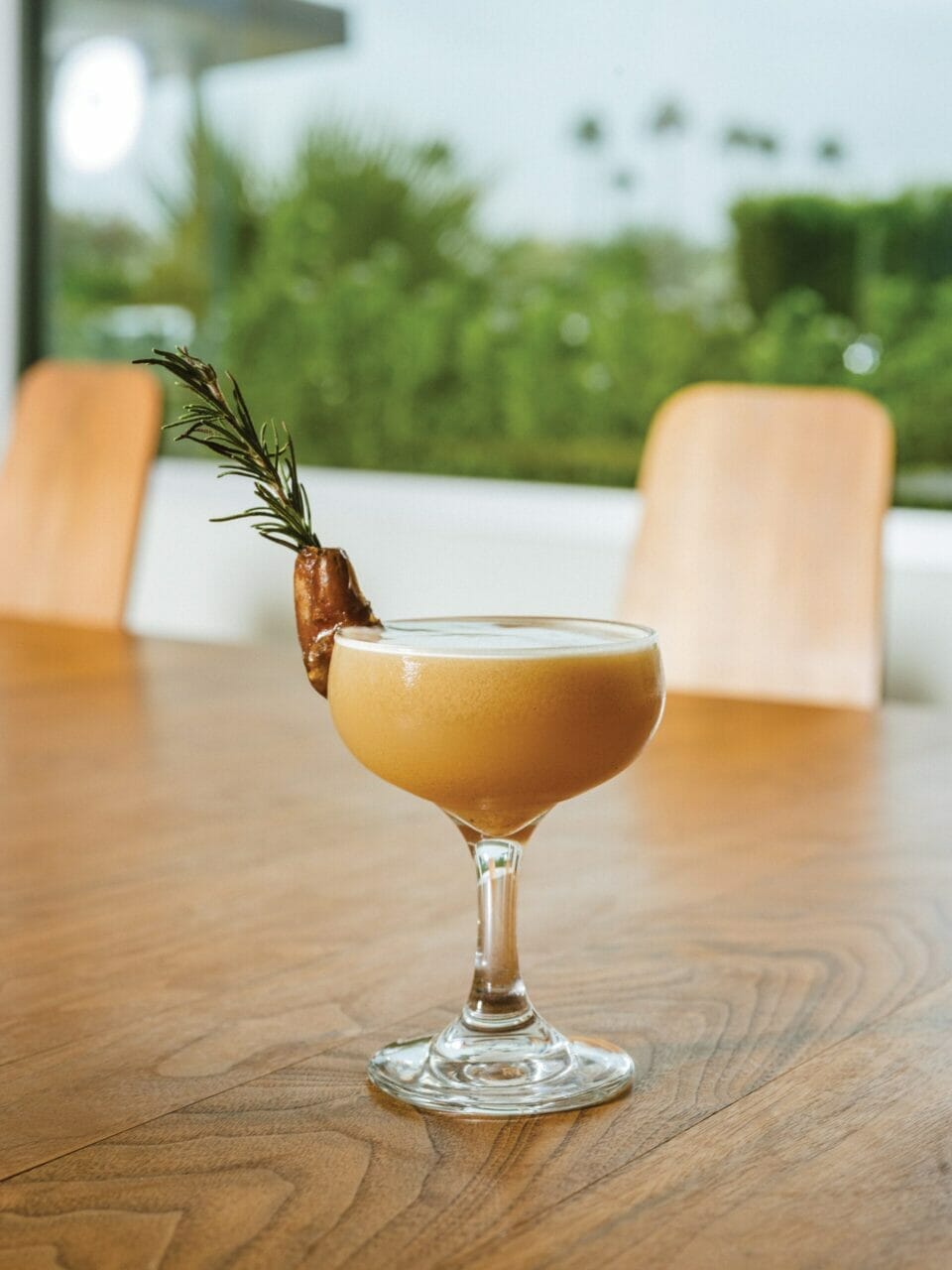 This culinary style embodies a reverence for sustainability and brings together a fusion of techniques and recipes from all over the world, heavily influenced by the diversity of those who call the Golden State home.

While many local chefs have long been proponents of California cuisine, lately the Coachella Valley has leaned into local crops more than ever. Dates in particular are having a moment. You can see it in packaged products, spices, and restaurant menus.

You can also see the evidence right here in the kitchen, where the date challenge is getting down to business.

First up is Tiffany O’Connor, bar manager at Clandestino, a modern mixologist who crafts whimsical and inventive cocktails. She stands behind the bar, mixing, muddling, and shaking until she produces a drink that pays homage to her Coachella Valley roots: a fragrant vegan whiskey sour, made with date- and charred-rosemary-infused demerara syrup, lemon juice, and chickpea-based aquafaba in place of the usual egg white. She garnishes it with a deglet noor date and a sprig of rosemary.

A playful twist on the traditional sour, the cocktail boasts a rich, caramel color and smells enticingly aromatic, even when it’s simply sitting on the bar. The smoky flavor profile is mellowed by the date’s sweetness, followed by a citrus high note that bursts like sunshine. 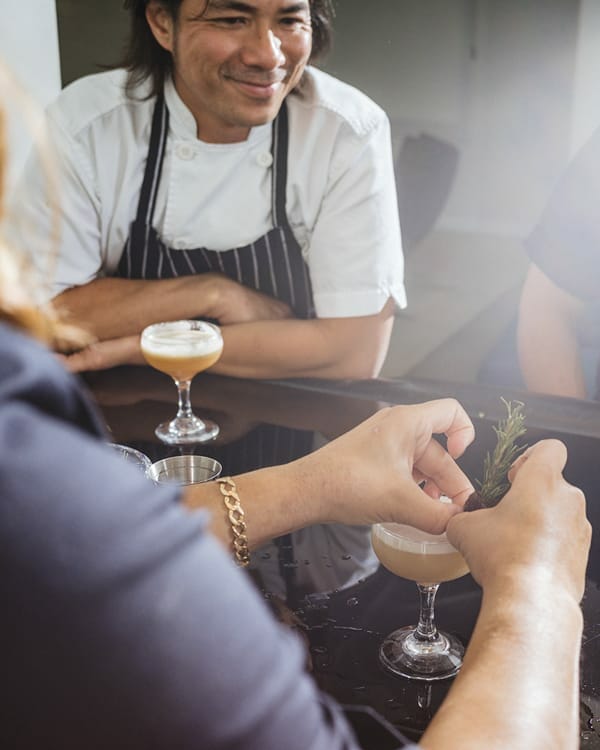 Michael Hung looks on as Tiffany O'Conner garnishes her date-infused vegan whiskey sour with a date and rosemary.

Who can we toast for this cocktail? How about David Fairchild, a 19th-century botanist who introduced more than 200,000 crops to the States, including the dates that grow throughout the Coachella Valley. Fairchild and his colleagues were basically the Indiana Jones of the botanical world, globetrotting for seeds and cuttings as their archaeological treasure. Shortly after Indio built its depot on the Southern Pacific Railroad line, the U.S. Department of Agriculture dreamed up a wild plan — farming the desert.

Fairchild and colleague Walter Swingle headed to the Middle East and North Africa in search of crops that could survive our desert’s similarly arid soil and harsh summers. They returned with date palm seeds and cuttings.

By 1904, a date experimentation station had been established by the government to test the date’s viability as a crop. Within a couple of years, the shoots gathered by the botanical explorers began to bear fruit.

Now those dates are part of this whiskey sour. Chef Michael Hung hoists his glass into the air as he contemplates the juxtaposition of flavors. “It’s a well-rounded, complex sweetness,” Hung says, taking a sip. “The burnt rosemary adds a note of levity and slight bitterness to complement the date.”

Hung, a transplant from Los Angeles (and many cities prior), is the executive chef at SO∙PA at L’Horizon Palm Springs and The Colony Club at The Colony Palms Hotel, specializing in cuisine that brings fusion to the forefront.

As a kid in New Jersey, Hung took over the cooking duties for the family when his mother had health issues from scoliosis. For recipe ideas, he pulled from the greats on PBS cooking shows, like Jeff Smith, Graham Kerr, and of course, Julia Child. He also infused a sense of place to his meals, adding classic East Coast red sauce dishes to his repertoire.

“When I’m creating with food, I have a lot of different lenses I use,” he says. “What is the temporal, physical experience? What does it look like? Where are we? What’s the story I’m trying to convey? Also, what will excite me?” 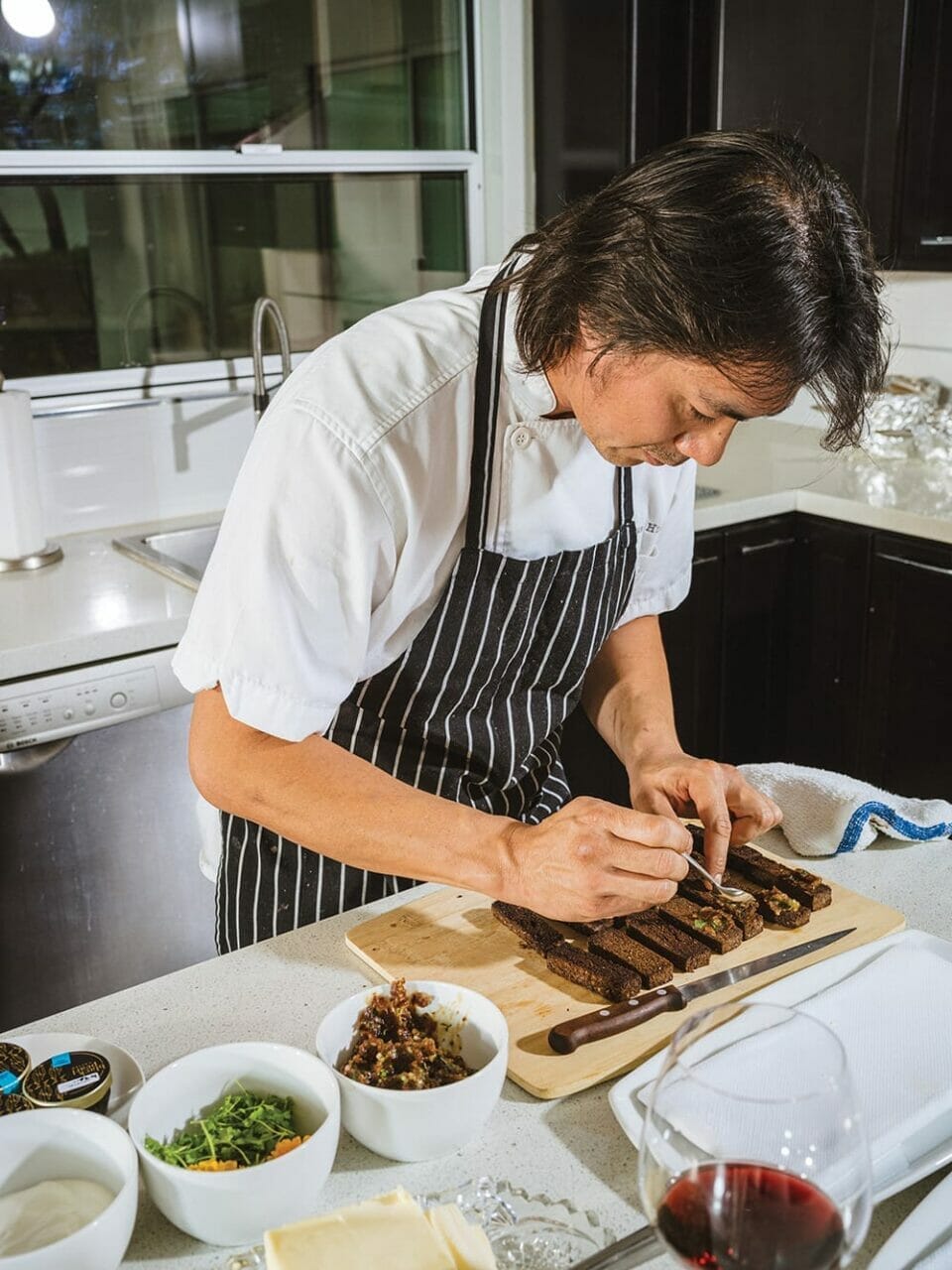 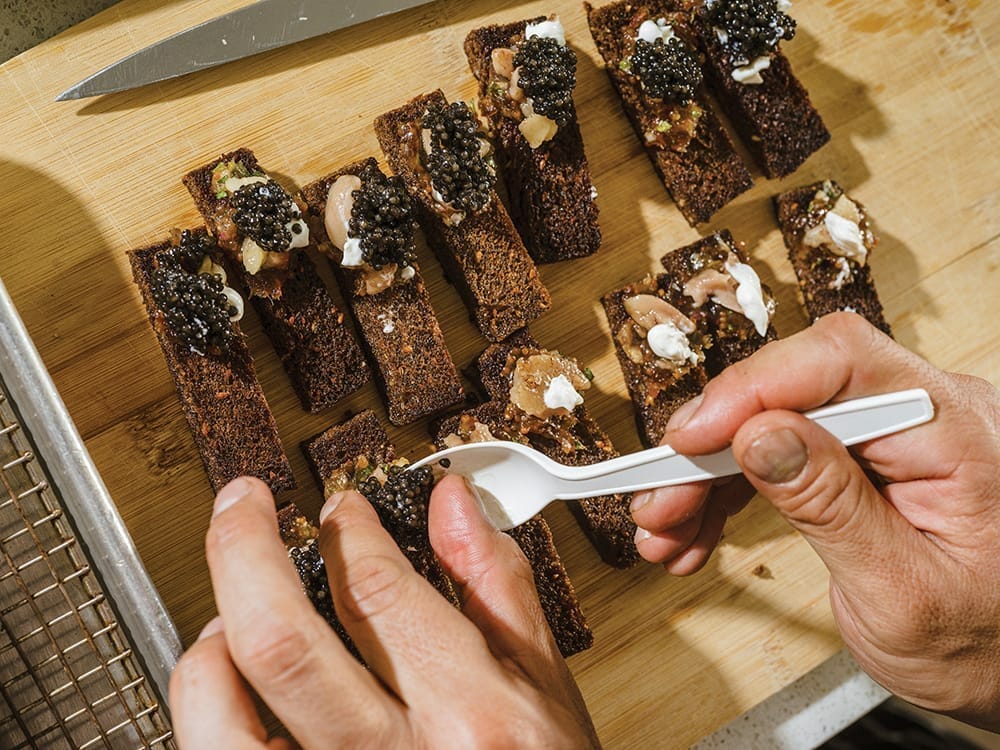 For the date challenge, Hung prepares canapés of buttery black rye crostini spread with date mostarda and topped with bone marrow, dollops of Siberian Ossetra caviar, and a nip of crème fraîche. It’s a sly method of incorporating the date, and it works. Imagine every dial on a stereo modulated for listening to a symphony. None of the notes are overpowering; every element complements the next.

“To me, that’s how fusion is supposed to work,” Hung says. “Using dates is a rendition of something I’ve been doing for many years.” 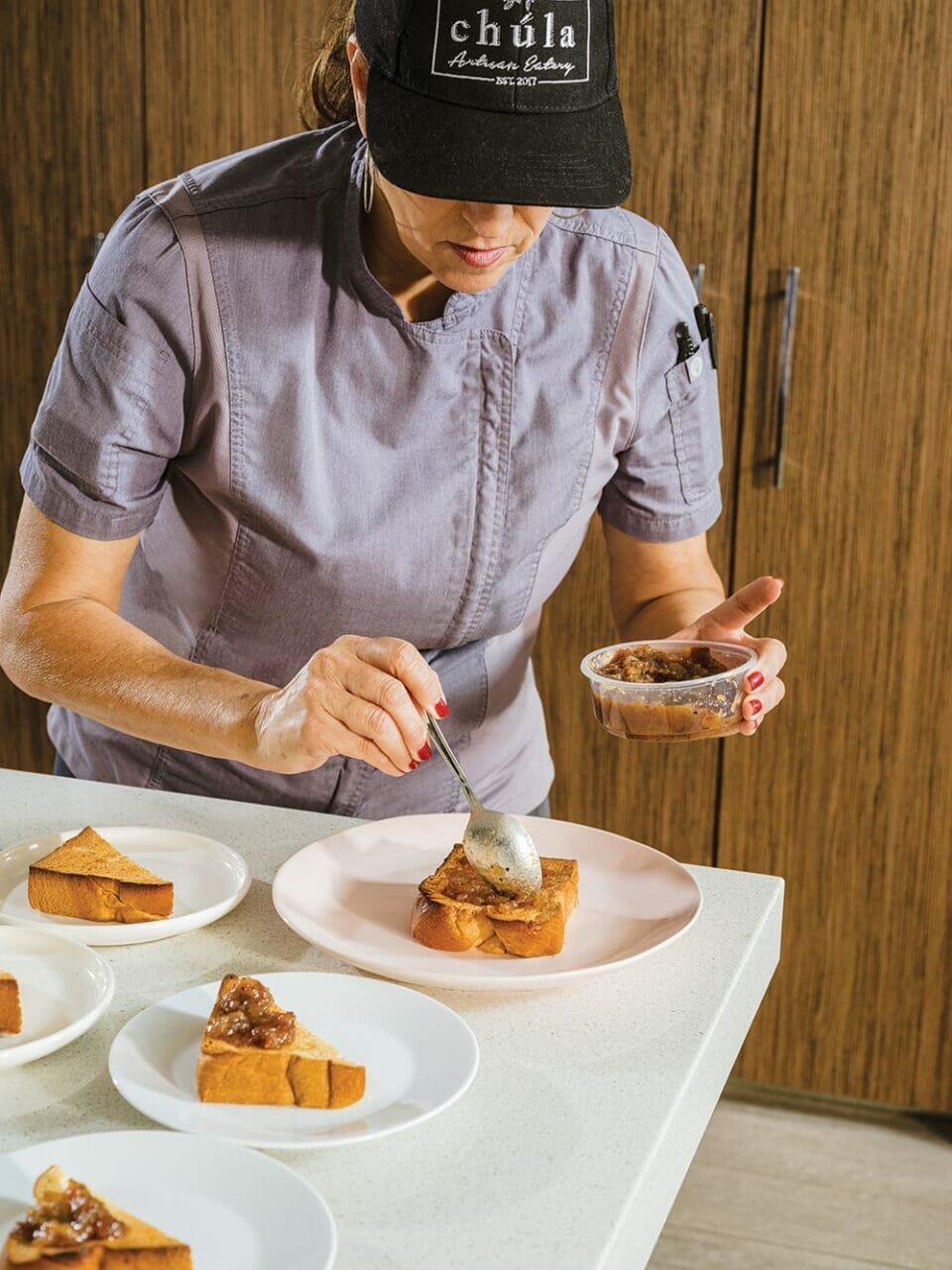 Katherine Gonzalez tops toasted brioche with homemade date jam, creating the base to her sweet and savory six-layer brioche.

Katherine Gonzalez, who grew up in Arizona, is another chef who brings her childhood to the table. Her mother’s family migrated from Mexico, while her father’s family hailed from Spain. In short, she was raised on excellent food. “Whenever I’d come home from school, my mom would be in the kitchen making tortillas, and that was my snack food,” she says. “They were so warm and comforting, and I wanted to pass that feeling on to others.”

For many years, Gonzalez sold homemade salsas and tamales at farmers markets in the Lake Tahoe region, where she spent summers. After the popularity of her food swelled, Gonzalez wanted to bring some of that goodness to people back home in La Quinta, where she spent the rest of the year. That’s how her restaurant, Chúla Artisan Eatery, was born.

“It’s a business built on salsa,” she laughs. “I knew that because I loved this food, there would be other people who loved it too.”

Her next venture is Chúlita, a smaller spot nestled in Indian Wells with a menu that skews more toward the Spanish side of her family, offering crusty breads, cured meats, and herbal cocktails. 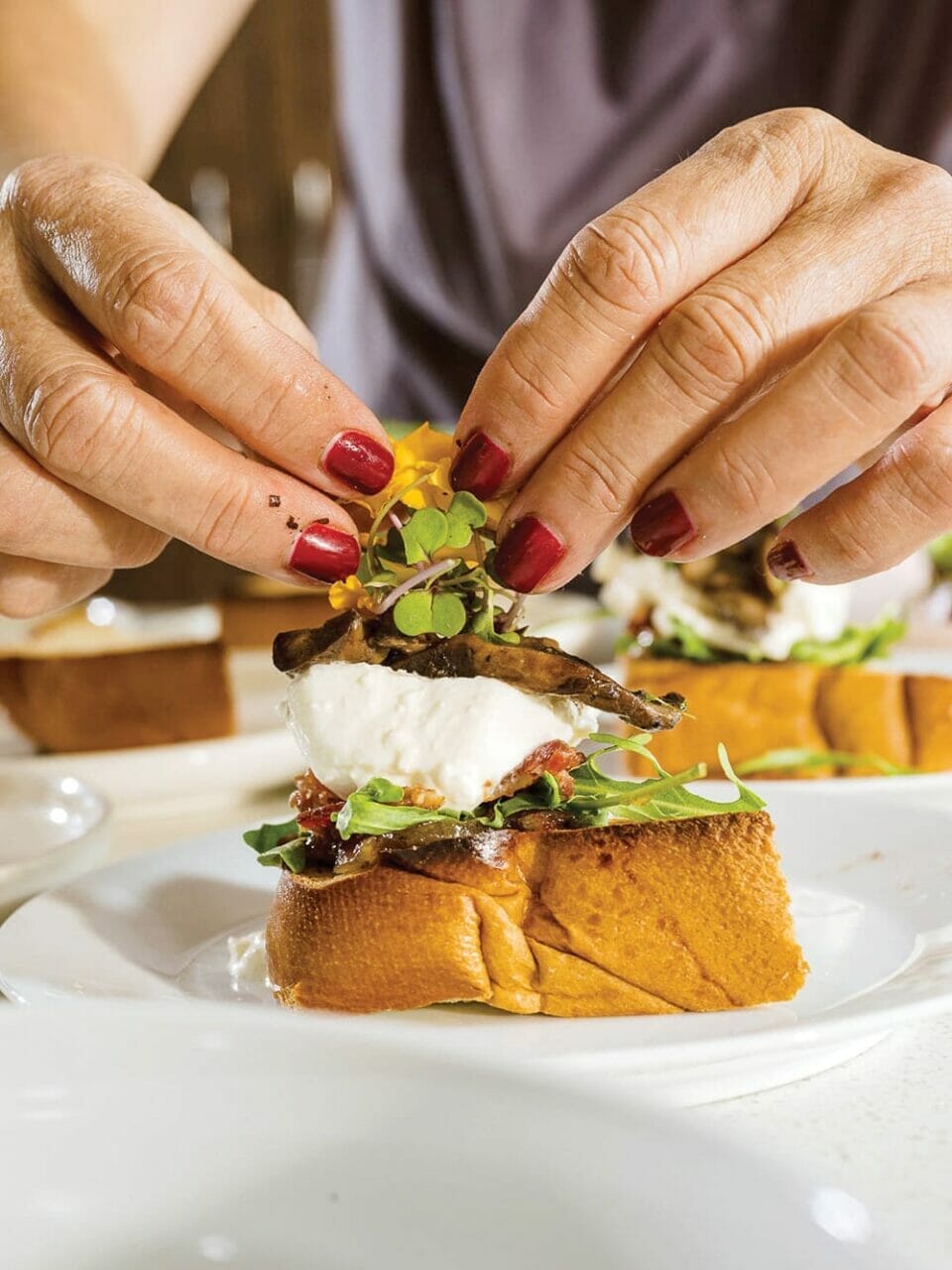 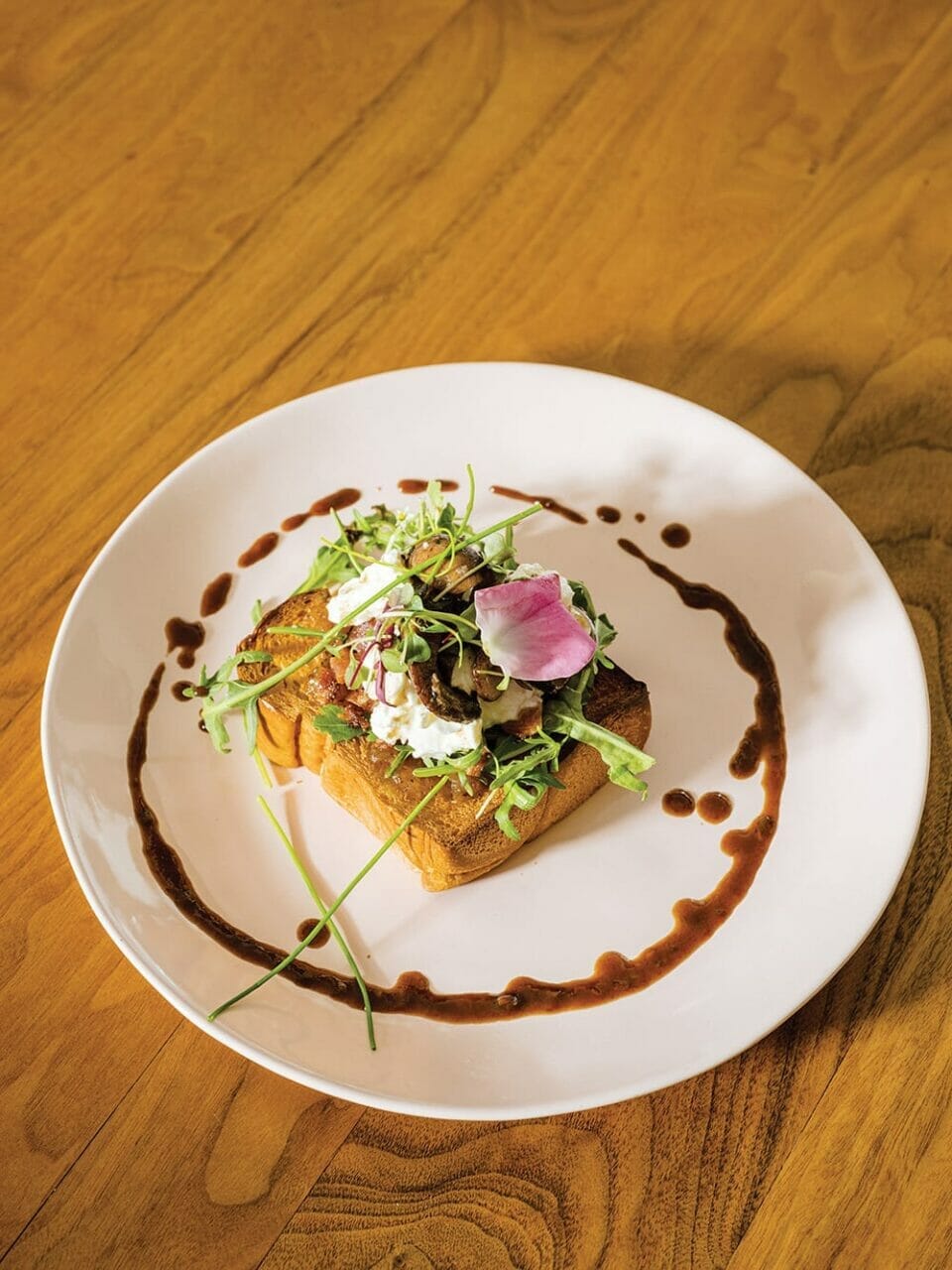 For the date challenge, she’s concocted a towering six-layer toast topped with mushrooms, bacon, burrata, arugula, date jam, and a date-infused balsamic. It’s an intoxicating combo of sweet and savory, with the toffee-like jam practically flamenco dancing around the earthy portabellas and creminis.

Back at the grill, Villanueva, owner of Daniel’s Table in Cathedral City, adds a final touch of seasoning to slabs of bison tenderloin. He does most of his cooking this way, over a flame — even at his restaurant. “As much as possible, I want people to get the aromatics from the earth,” he says. 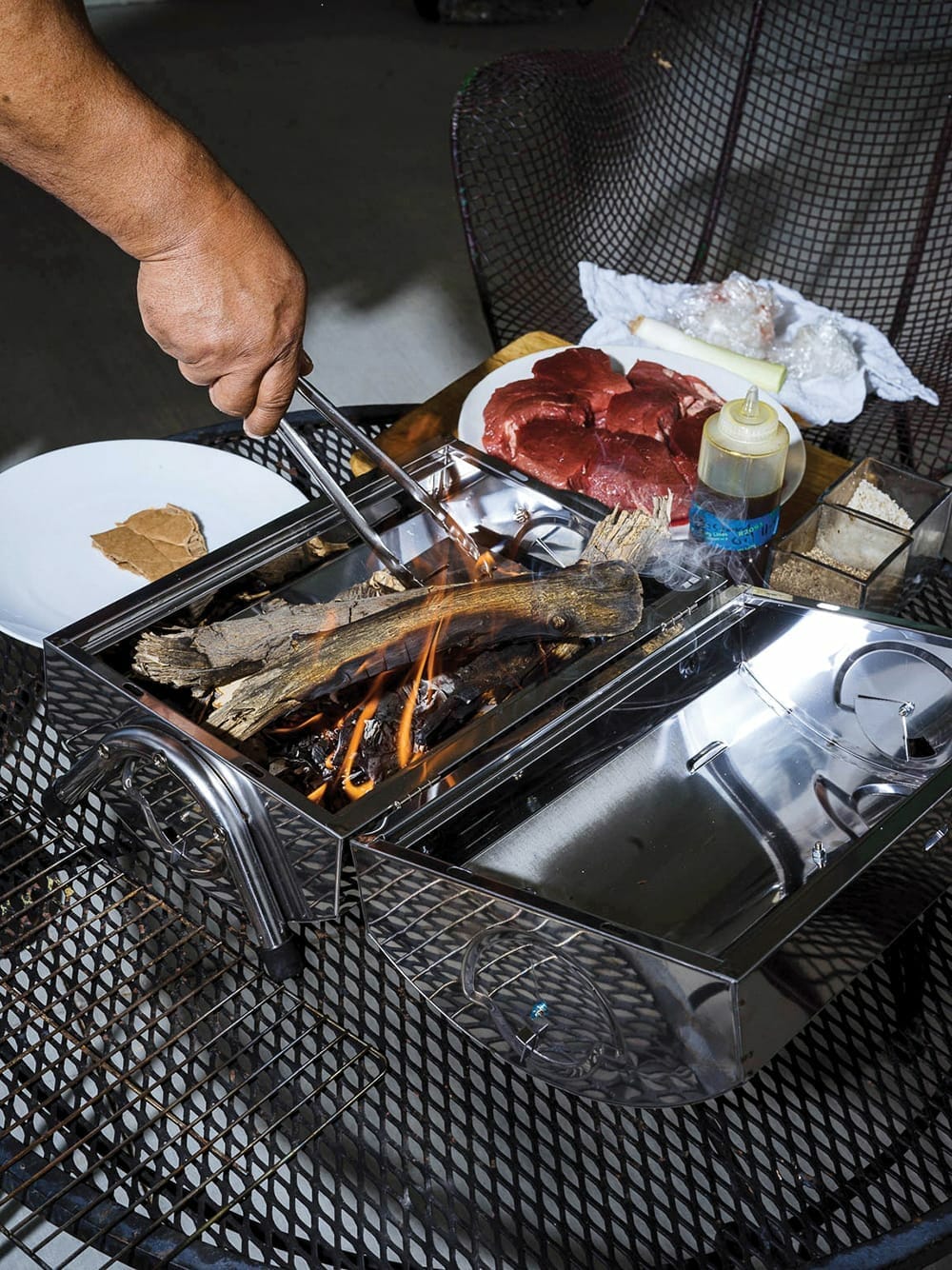 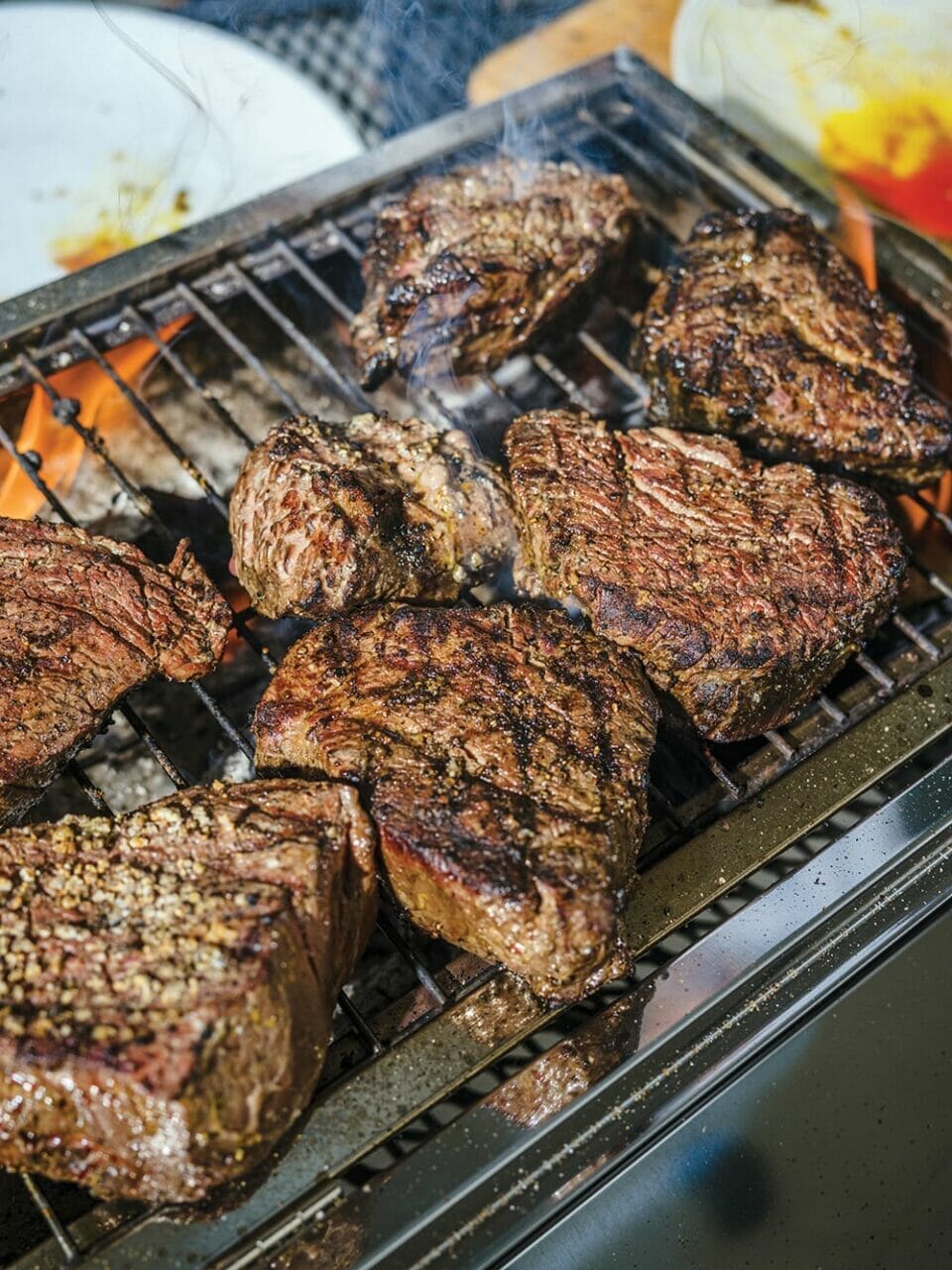 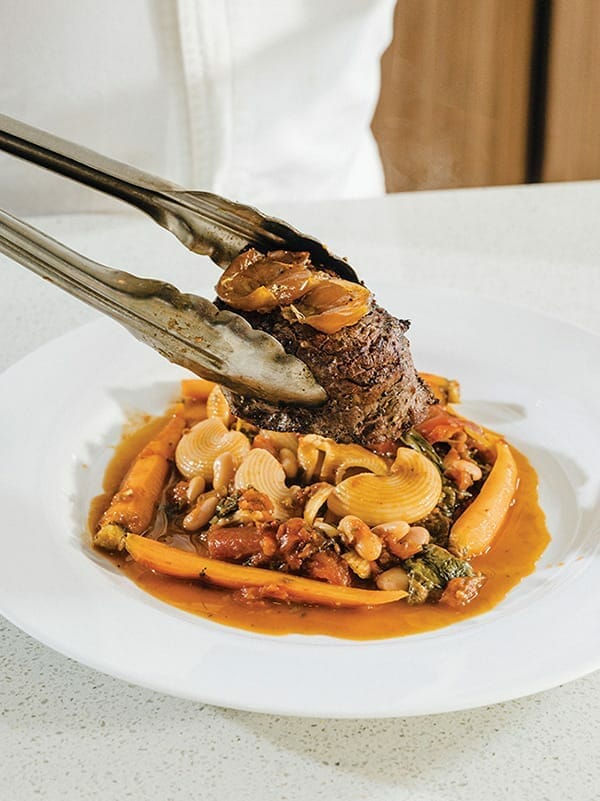 After carrying the platters into the house, Villanueva accompanies the tenderloin with pasta in a smoked tomato and cannellini ragout, incorporating barhi dates and goat-cheese-stuffed medjools from Futterman Farms. Each bite of tender meat is imbued with the tangy smoke of citrus wood, sourced from a ranch in Mecca.

When Villanueva looks for food inspiration, he begins with his own stomach. 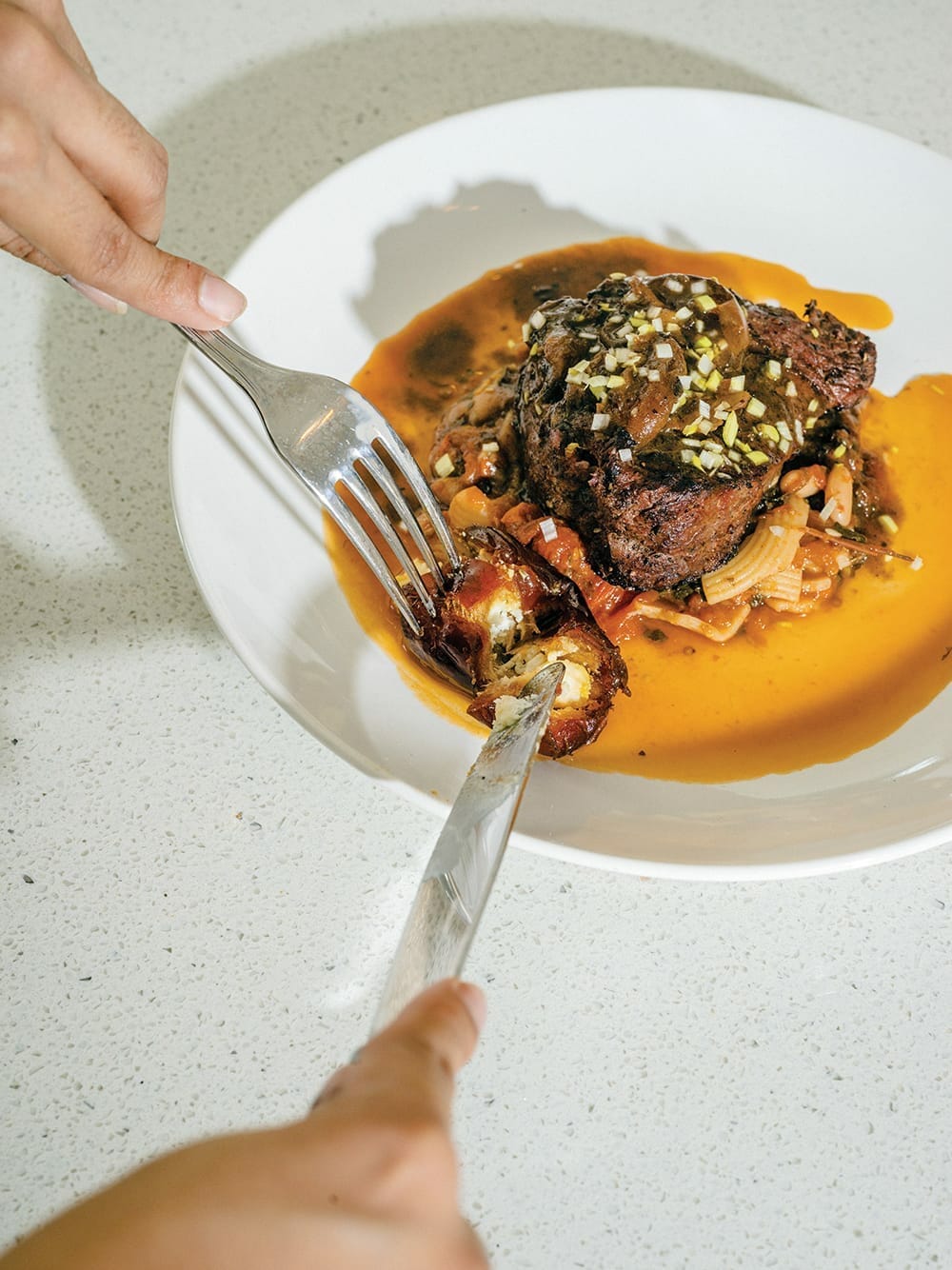 Gonzalez came to the culinary world by chance, purchasing a half-price Betty Crocker cookbook at a local store. After baking a vanilla cake with whipped cream and strawberries, “I couldn’t stop.” He now serves as co-owner and pastry director at Eight4Nine Restaurant & Lounge. 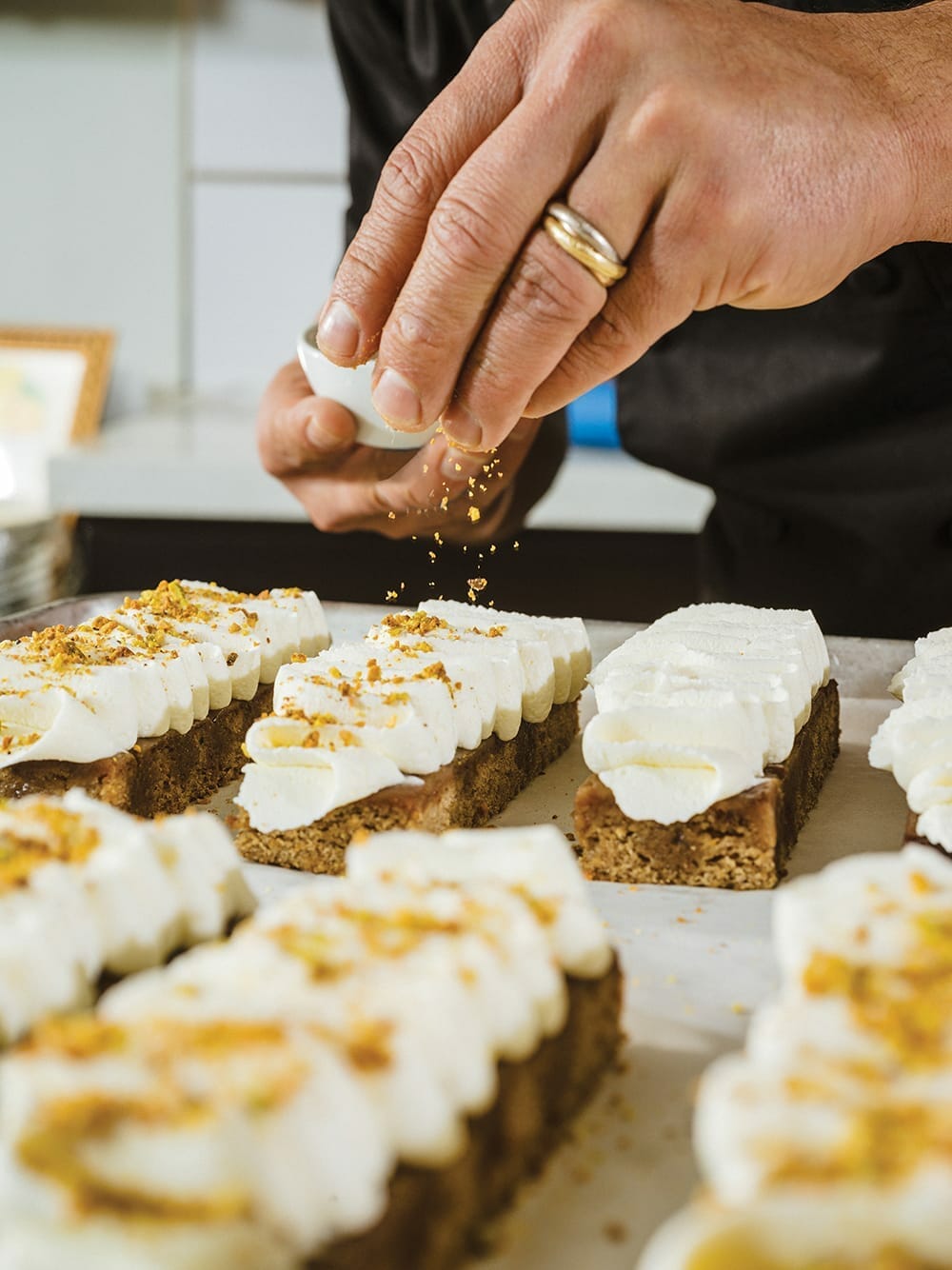 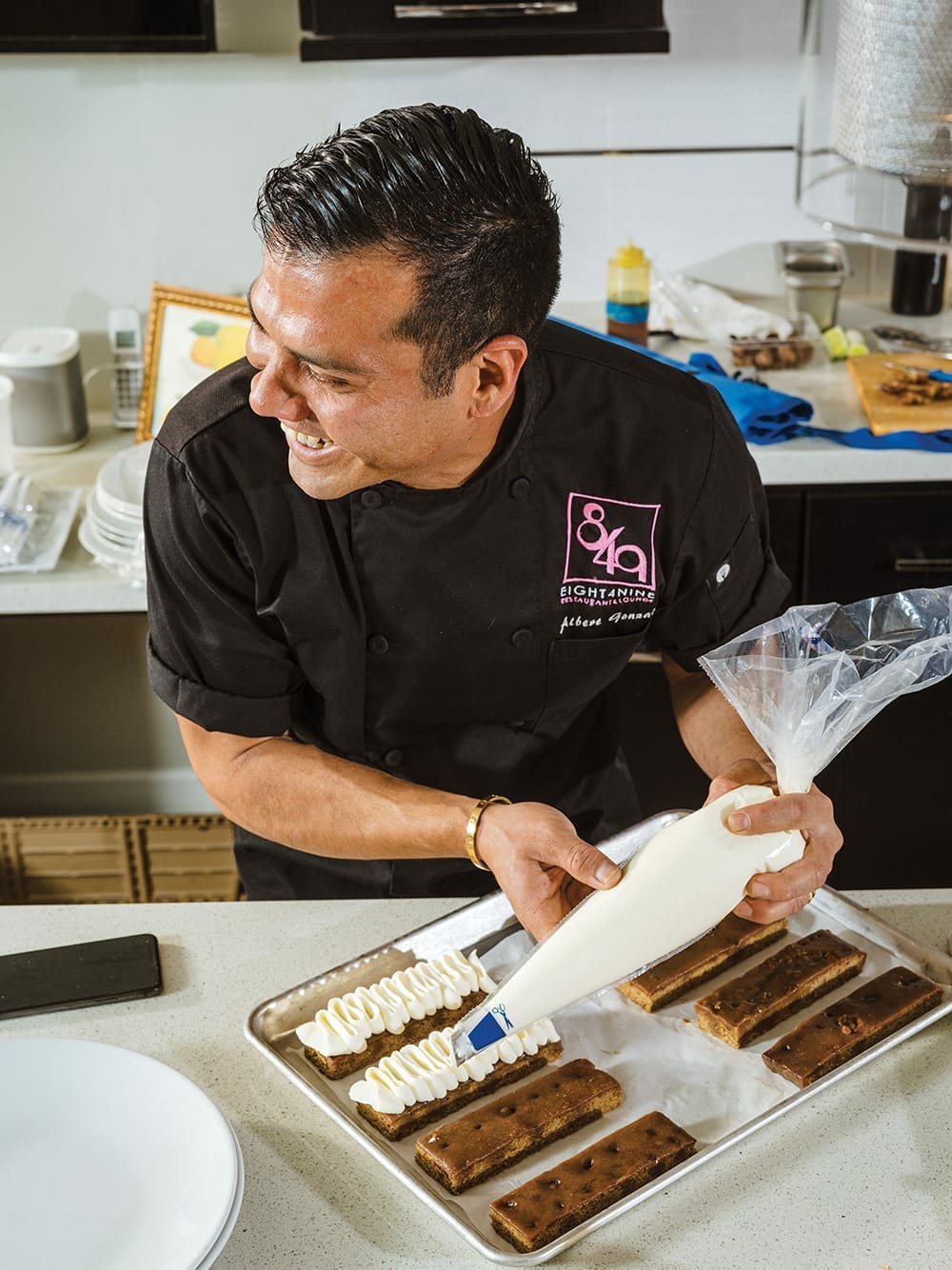 “I can’t imagine anything sweeter,” he says, sprinkling orange-candied pistachio pieces atop the small cakes.

With cocktails mixed and every course plated, the chefs gather around the long kitchen island, covered with a mouthwatering assortment of food. Each dish is a vessel, holding the stories of the person who crafted it. “We’re in the kitchen to bring you closer to us,” Villanueva says. “If you eat and don’t feel like you have a relationship to the person who made your food, and to the land where the food came from, something is wrong.” 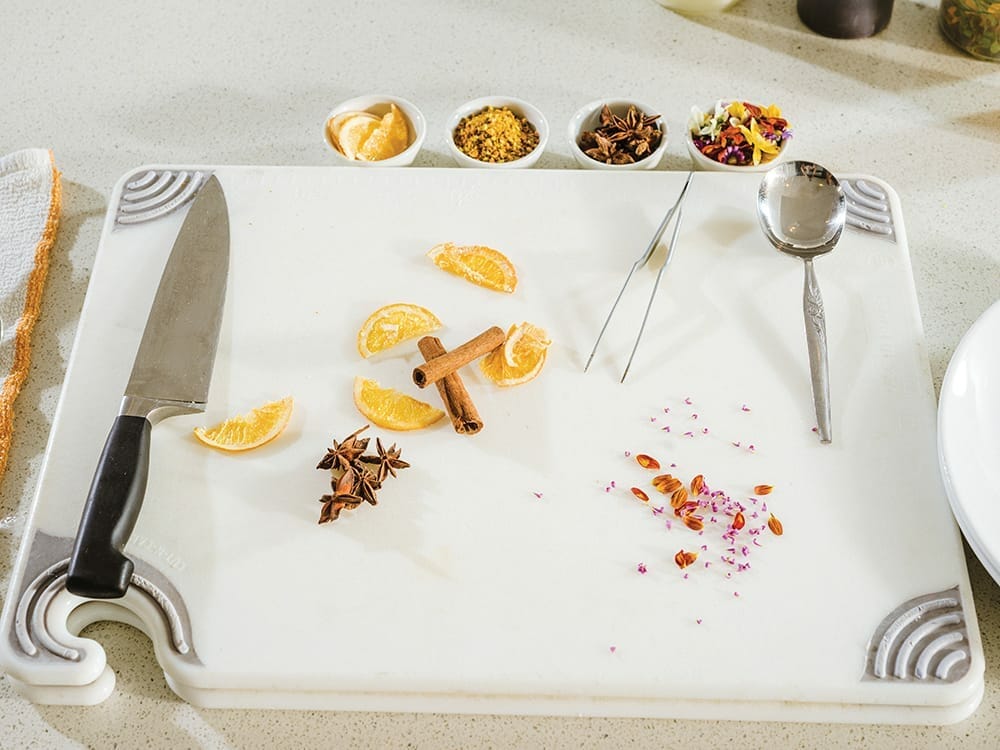 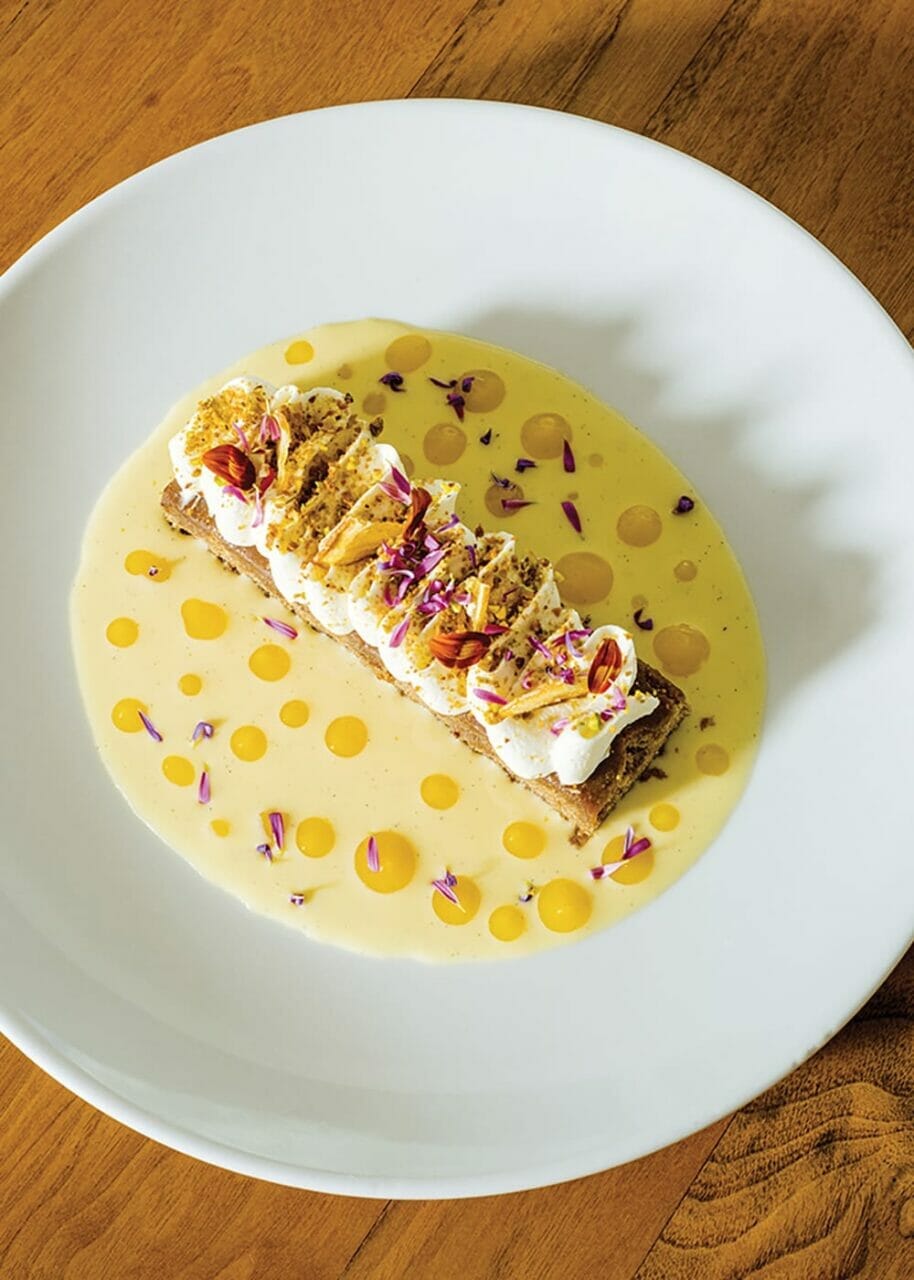 Designed in 1950 by architect Herbert Burns, the Modern Palms estate in Palm Springs is available as a vacation rental via Natural Retreats. naturalretreats.com