Discover the Joy of Coffee in Greater Palm Springs 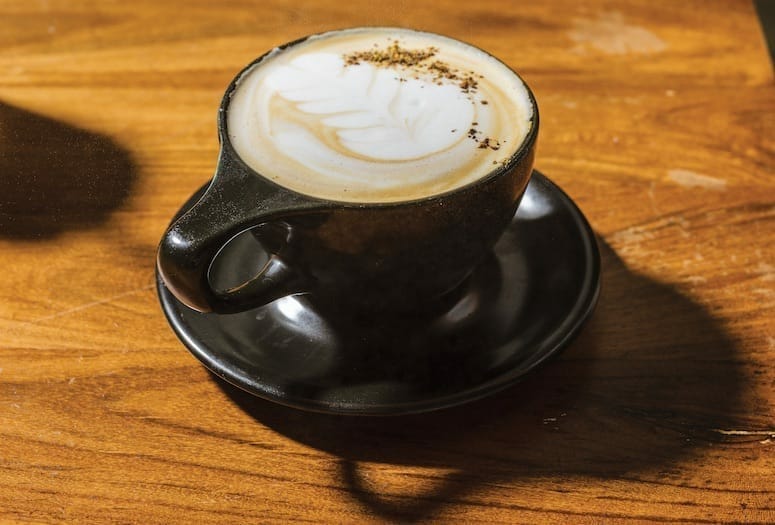 PHOTOGRAPHY BY NATE ABBOTT
We’ve all seen those mugs that warn: Don’t talk to me until I’ve had my coffee! It’s silly but true. Many of us can’t — or at least don’t want to — function until that first mug of java is in our hands. Luckily, the coffee world is robust in the Coachella Valley, where a plethora of java purveyors has created an impressive indie coffee scene that could go bean to bean with many major cities. For the up-at-at-dawn coffee shop owners, baristas, and roasters to who  keep the desert caffeinated, creatvitiy is key. 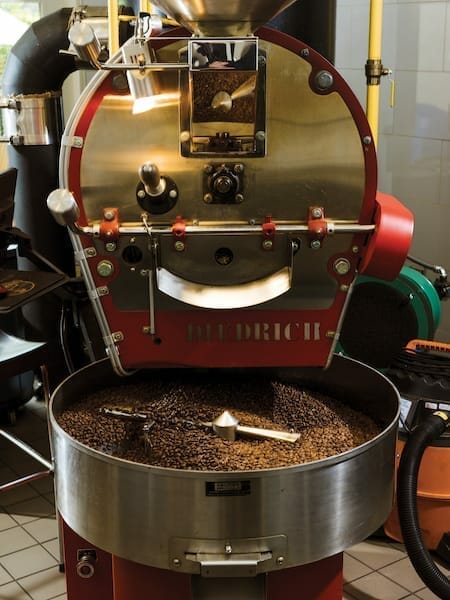 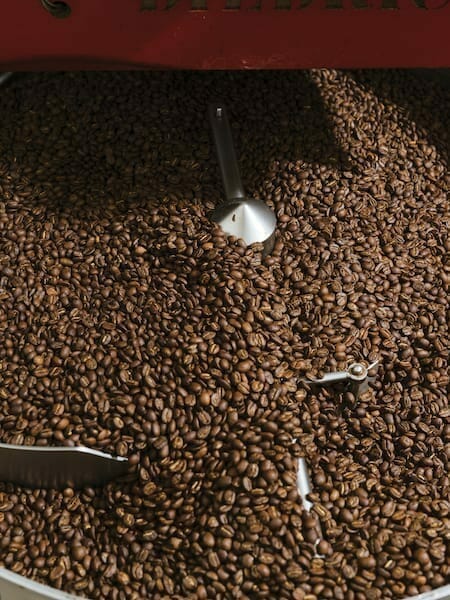 Erika Flannery researched several coffee roasters before opening her pretty patioed shop in the Uptown Design District last February. “I didn’t want to just find a good coffee but people I could work with who have the same values and beliefs that I do,” she says, adding she was seeking a roaster that treats its employees well, knows exactly where the beans are sourced and maintains personal relationships with its farmers.

When her husband’s business partner suggested a family-owned roastery called Sisters Coffee Company based in his hometown of a Bend, Oregon, she added it to her list.

“I reached out to one the owners, and we had over an hour-long conversation,” she recalls. “I felt like we had been friends for a long time. I already liked them, then when I tried the coffee, I was like, ‘Oh, this is the one.’”

The beans are sourced mainly from Central and South America and Ethiopia. “The quality of our coffee stands out, and it’s a conversation starter because you don’t see it around here,” Flannery says. “They only have three accounts in California, and we’re the biggest.”

Steve Garcia, who’s been operating Coachella’s Sixth Street Coffee since 2019, had a similar experience with the roaster he chose: Arcade Coffee Roasters from  nearby Riverside. 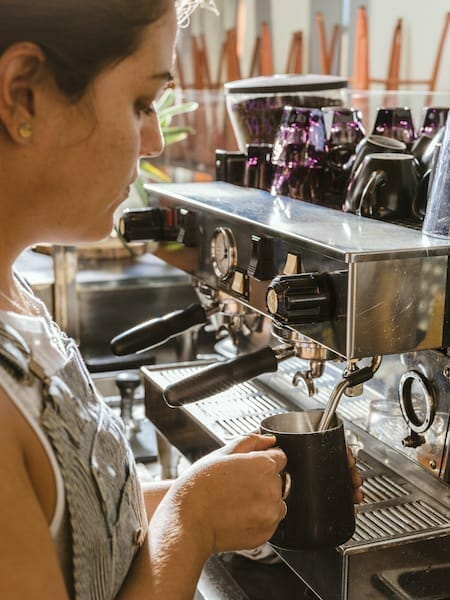 The baristas at Ernest Coffee brew several seasonal offerings, such as a walnut latte.

“I decided to make them my first meeting, and I never went anywhere else,” he says. “They had me try a bunch of drinks, so I could really try the bean in different ways. I was sold then and there. It was really good, of course, but they also really care about what they’re doing when it comes to coffee, and the owner wants to make sure that whoever he’s selling his beans to has the same passion for coffee.”

One-of-a-kind coffee creations abound throughout the valley, drawing customers in for wild-flavored drinks they can’t find anywhere else. At Sixth Street, Garcia goes through about 30 gallons a week of his housemade horchata that he uses in the shop’s best-selling horchata latte (not including the oat milk-based horchata he makes for the non-dairy version of the drink). At Palm Springs’ Bluebird Days coffee shop, lattes can be served hot or cold and infused with housemade salted caramel or honey cinnamon, plus a blended chai affogato finished with a mocha drizzle. 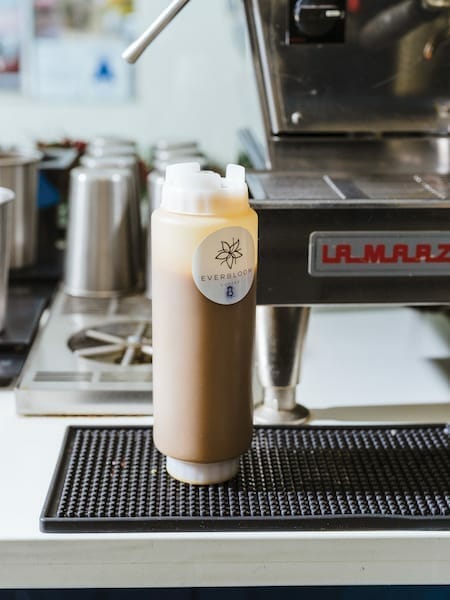 Syrups at Everbloom are created with specialty ingredients like Madagascar vanilla bean. 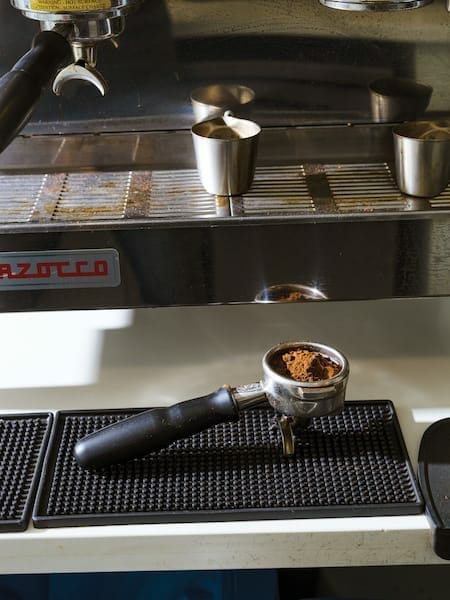 Regulars have become hooked on Café La Jefa’s increasingly famous Mexican-inspired café de olla, brewed with orange peel, clove, and brown sugar, as well as its pineapple-based tepache. “It’s kind of like a kombucha, and we ferment it here,” Flannery explains. “It’s a typical Mexican drink, and people love it.”

One of the most fabled drinks at Palm Springs’ nearly decade-old coffee shop Ernest Coffee in the Uptown Design District is its pistachio-rose latte, made with espresso, almond milk, a pistachio-based orgeat (a nutty syrup typically made with almonds), and rose-infused sugar. It’s garnished with a dusting of a pistachio-dried-rose topping, making it as photogenic as it is flavorsome. Earlier this winter, the Ernest crew came up with a warming toffee walnut latte as a seasonal specialty, too.

“It’s a creative space here, so it allows us to be creative and express ourselves and get together to come up with different recipes,” says manager Shannon Flynn, adding that staffers make nearly all syrups – including lavender, chai, white mocha, and caramel – on site. 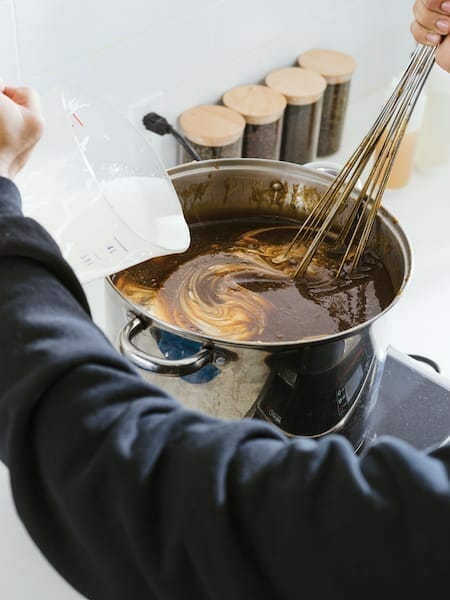 Everbloom’s butterscotch  is made from scratch.

“That one’s like a chocolate ganache, and we use fair-trade chocolate. That goes with our ethos: trying to source with intention, integrity, and transparency.” The shop’s most popular drink, the butterscotch iced latte, uses a housemade butterscotch syrup. “It’s rich,” says Mercado, “not overly sweet, similar to caramel.”

When Koffi co-owners John Abner and John Strohm opened the first location of what would become the valley’s most successful string of indie coffee shops on North Palm Canyon in Palm Springs nearly two decades ago, they were using an outside roaster who’d craft beans to the café’s specifications.

After eventually expanding with a second shop in South Palm Springs, they set their sights on a Rancho Mirage location that would serve as both a third outpost and roasting room, allowing them to create their own fresh custom roasts to serve as the base of their coffee menu, sell on their shelves, and deliver wholesale to local businesses. 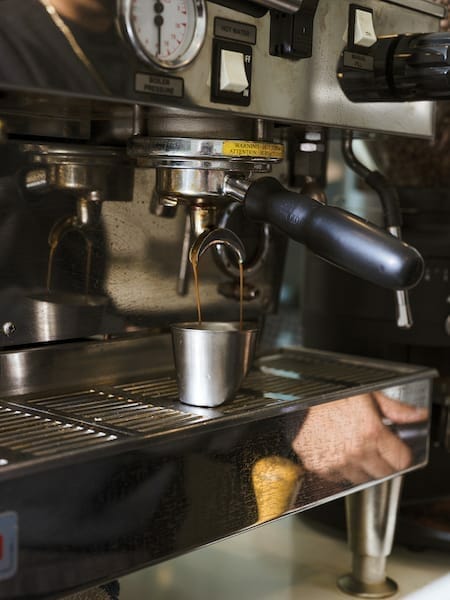 “When it came time for us to start roasting, I knew what was in all of our blends and had an idea of the recipes in my mind,” says Koffi co-owner and roastmaster Abner. The roasting room uses two importers, which source beans from the Americas, Indonesia, and Africa. Koffi is now roasting a 100,000 pounds of beans a year with fresh roasts each week. Koffi’s roaster is equipped with infrared panels that keeps the beans from scorching. They roast each type of coffee individually, before blending them post-roast.

“Each of our blends is developed by hand,” says Abner. “Our coffee is always rich and smooth. People recognize that and appreciate that.” 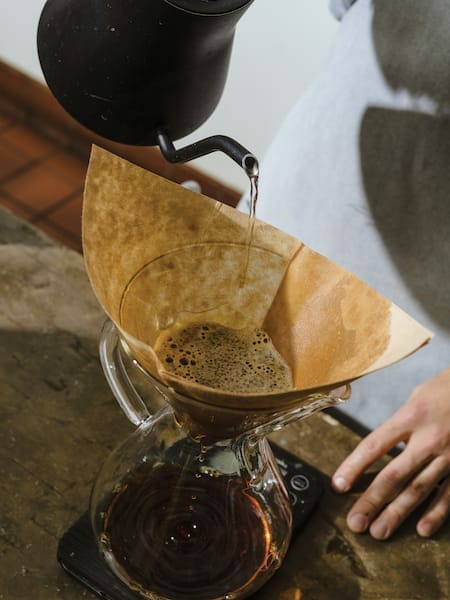 A baristas uses the pour-over method  at Sixth Street Coffee.

818 Coffee owner Michael Rodriguez’s love of roasting started, of course, in the 818 – his home in Glendale, California, to be exact – a few years ago while he was working in the entertainment industry. Roasting his own beans began as a hobby, but when he was furloughed from his job at the start of the pandemic, Rodriguez and his fiancée moved to the Coachella Valley, where he started small-batch roasting full-time in an industrial space in Palm Desert, selling his beans online and providing coffee to private and pop-up events. He currently sources most of 818 Coffee’s beans from Guatemala, Colombia, and Mexico.

“We’re making about three pounds at a time,” explains Rodriguez, who plans to open a brick-and-mortar coffee shop near El Paseo. “You can fine-tune the flavor more so with smaller roasters. People who drink coffee can notice the difference. What I roast depends on the beans. Some are better light roast; some are better medium roast. I’m not selling the same thing over and over.”

Because iced drinks rule in the desert, Bluebird Days owner Ata Karamanci wanted to build a menu at his Palm Springs coffee shop located inside Lighthouse dispensary that was centered around the perfect cold brew rather than regular coffee poured over ice.

“The pure cold brew is something we did a lot of trial and error on to get that recipe right,” he says of Bluebird Days’ brew, which is made with both beans from Joshua Tree Coffee Company and super-cold water to keep the acidity down, making for a smooth, sweet taste. “We brew and keg it in house, and we have it on draft. We steep it for about 18 and a half to 19 hours, depending on that day’s specific batch.”

At Ernest, which uses Stumptown Coffee Roasters as its go-to bean, baristas continually refine the shop’s espresso. “We taste it every morning and make sure it’s right, and we’ll calibrate until it’s proper,” explains Flynn. “And we do that throughout the day. It’s going to change because of the weather and temperature in the air. We want to make sure that it’s something we’re proud to serve.” 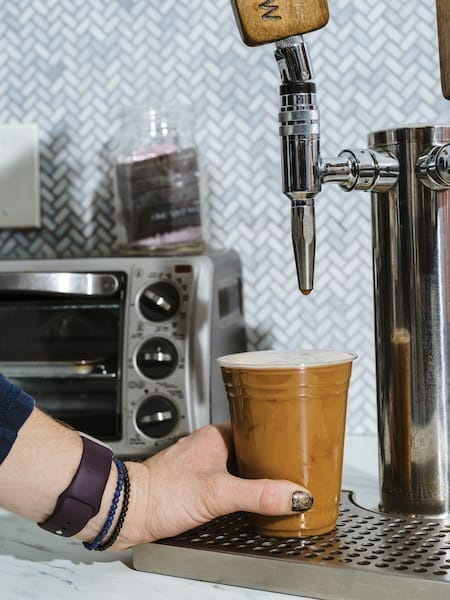 When they’re jonesing for java, local coffee connoisseurs reach for these drinks.

“It’s equal parts espresso and milk. It’s a short drink, so I can still taste the quality of the coffee.”
— Café La Jefa owner Erika Flannery

“I just love that pure coffee taste. I drink most of my coffee black.”
— Bluebird Days Coffee owner Ata Karamanci 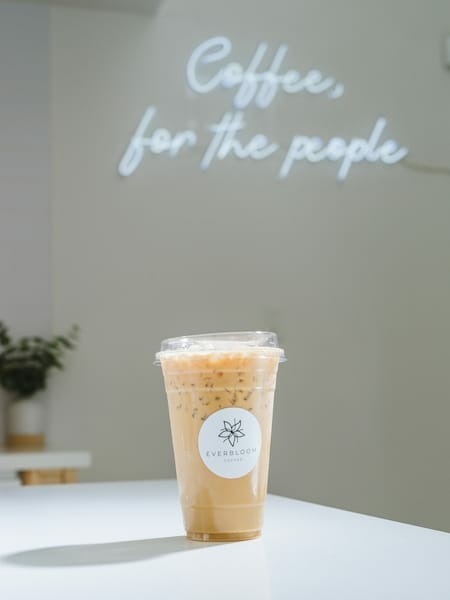 “I use the pour-over method. I like black coffee year-round. I just like the taste of the coffee.”
— Sixth Street Coffee owner Steve Garcia

“I love our butterscotch latte hot with oat milk. When I drink that, it’s nostalgic, like my grandmother giving me one of those butterscotch candies.”
— Everbloom Coffee co-owner Efrain Mercado

• READ NEXT: Bar Cecil in Palm Springs Offers $50 Martini, and It's No Gimmick.