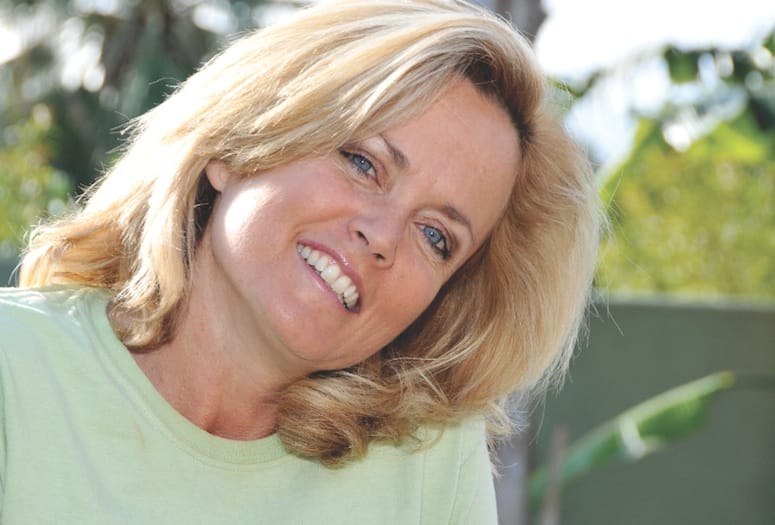 Mariah Hanson started The Dinah more than 25 years ago in Palm Springs, and now it's the largest lesbian party in the world.
PHOTOGRAPHS BY CHERYL WAZAK

But even 500 miles away from her family home in Sonoma, you can feel her intensity blaze as she describes her passionate love affair with The Dinah — the largest lesbian party in the world. For more than25 years, promoter Hanson has lit up Palm Springs each spring with her distinctive brand of lively women-centric merriment.

“It quickly became a bucket list item for lesbians,” Hanson says. “We really deserve top-notch festivals, and that’s what The Dinah delivers. And we’re proud of it. Our customers deserve it.” The Dinah, or Dinah Shore Weekend, brings thousands of primarily gay women to the desert annually for the event of a lifetime. For many, this is a rite of passage, for others it’s a chance to explore budding sexuality, and some come seeking solace for a broken heart.

“Not everyone’s going to Dinah because they feel good,” Hanson explains. “They’re going because they want to feel good. And we position ourselves for that purpose, because then everybody gets lifted.”

Hanson has made a career of creating venues and events where gay women feel cherished and safe, beginning in 1988 when she debuted San Francisco’s Club Skirts dance club on Sunday nights for Bay Area women. Fueled by insatiable enthusiasm, Hanson quickly extended her Queen Midas reach to include The Girl Spot, a Saturday night dance club; the Monterey Women’s Festival, later known as the mini Dinah; and The Cherry Bar, offering a place for Northern California lesbians to party seven days a week.

In 1991, Hanson presented the desert’s inaugural Dinah Shore Weekend at Palm Springs Desert Museum (now Palm Springs Art Museum). Maybe it was the unadulterated joy of communal celebration or the juxtaposition of riotous partying in an urbane venue, but the women went wild and the museum security staff assuredly earned their pay that night. In subsequent years, Hanson held The Dinah at local resorts where attendees could flit about the pool and flirt with abandon.

“I don’t know if it’s the sexual orientation, but we bring a different energy to an event and to an experience,” she says. “It’s really wonderful to have those sacred spaces for us.”

An astute businesswoman who has been recognized by city officials and LGBT organizations for her commitment to her craft, Hanson is a firm believer in “if you build it, they will come.” Mariah Hanson is a firm believer in “if you build it, they will come.”

And build it she did. While she is known for providing top-tier, always relevant entertainment, from old-school disco divas to cutting-edge artists, Hanson considers booking the Pussycat Dolls in 2006 as a major turning point in cementing Dinah Shore Weekend’s reputation as an industry star-maker.

The Dinah wasn’t the only entity that benefited from Hanson’s bold move. The Dolls went on to play The Ellen DeGeneres Show after appearing on the Palm Springs stage and, after that, late night — a key feather in any artist’s cap, Hanson says. Other big names followed: India.Arie and Jane Lynch in 2007, Pat Benatar in 2008, Lady Gaga and Katy Perry in 2009, Kesha in 2010, and Iggy Azalea in 2014.

Several of these now household names were mere specks on the entertainment radar when Hanson hired them, but her piercing prophetic vision saw their budding potential. “Ten years ago, agents were barely taking my calls,” Hanson says. “Today, they call me. I get sent rosters from major agencies, because they realize that lesbians are trendsetters and can help launch careers.”

For this year’s Dinah Shore Weekend silver anniversary, Hanson raises her own bar with a stellar lineup that includes pop sensations Meghan Trainor and Christina Perri and, of course, a few Saturday night surprises. While this promises to be the most phenomenal Dinah to date, Hanson remains modest about her success and attributes the event’s enduring popularity to the women who make the yearly pilgrimage to Palm Springs.

“I don’t think my ego plays an important part in the decisions that I make; my customers do,” she says. “The Dinah is the most amazing party because of what they bring to it.”

Defining Moments of the Dinah

1992: Bonnie Pointer of The Pointer Sisters performs at the event.

1995: Hanson receives a proclamation by Palm Springs Mayor Will Kleindienst.

2010: The Dinah is the cover story of the Los Angeles Times calendar section.

2013: Hanson adds The Dinah Film Series and Celebrity Poker Tournament to the schedule and donates proceeds to the Human Rights Campaign.