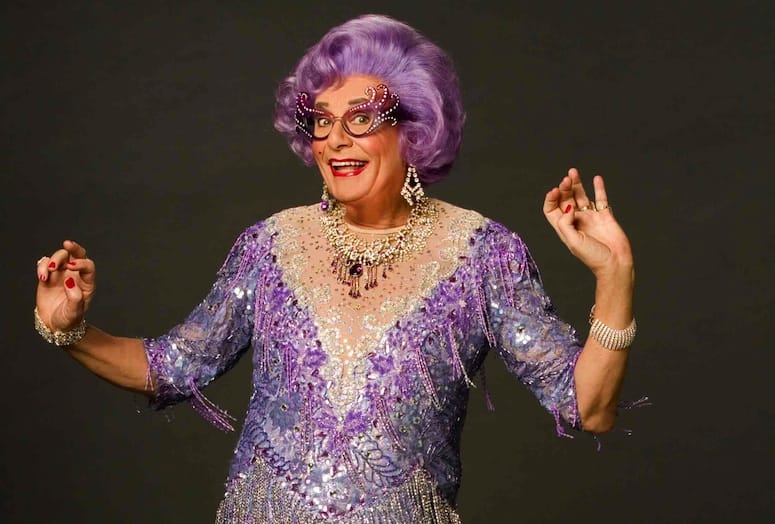 The desert has always loved the saucy, comedic entertainment star and her naughty innuendo, acerbic wit, and outrageous insights have garnered a strong fan base throughout the Coachella Valley.

According to the character’s creator and alter ego, Australian John Barry Humphries, “I think Dame Edna belongs in Palm Springs. She fits in rather well.”

Dame Edna’s Glorious Goodbye – The Farewell Tour, directed by Simon Phillips, comes to the McCallum Theater in Palm Desert for a special run March 30 through April 4.

“I want the people of Palm Springs to feel they are participating in a unique theatrical experience," he says. “The McCallum Theater is one of my favorite theaters. I’m welcomed, it’s a beautifully run theater, audiences are great and I’m happy to say I’m popular here.”

Humphries, an accomplished actor, artist, and author first debuted Dame Edna on stage in Melbourne in December of 1955.  He and his team make an effort to keep Humphries’ and Dame Edna’s identities separate. Humphries works with Dame Edna’s character as her manager with bits of dialogue, jokes, song, and cabaret.

“We have lots of laughs,” he says. “It’s a show, sort of like a little play. There are songs and dances, but mostly Edna talking to the audience.“

In addition to engaging with a live audience, Humphries says approximately 1,000 magnificent Australian gladiolas, Edna’s favorite flowers, are distributed to each audience member to wave at the end of every show.

In 2000, at the encouragement of his friend “and dearly missed personality,” Joan Rivers, Humphries took his Dame Edna: The Royal Tour show to North America and won a Special Tony Award on Broadway.

• As Dame Edna, Humphries has performed for Britain’s Royal Family.

• As Dame Edna, Humphries has appeared in film and authored books including an autobiography, My Gorgeous Life.

• As Dame Edna, Humphries has appeared on numerous television shows, including Ally McBeal, The Tonight Show with Jay Leno and her own show, The Dame Edna Treatment.

Alas, Humphries’ travel days are coming to an end.

“We won’t be touring anymore,” Humphries says. “Going to airports is becoming a terrible, terrible bore.  Travel is not what it was. I could go on touring in America forever, fondly exploring new places. I’m an avid rare book collector and enjoy seeking out little bookstores in different cities. But waking up in strange hotels and taking off one’s clothes at the airport is increasingly irksome. Very sadly, Dame Edna has announced that she won’t be touring anymore. She will be available for personal appearances, bar mitzvahs, corporate events, and luxury sea voyages.”