The 200 pounds of pharmaceutical-grade magnesium sulfate, aka Epsom salts, added to the warm water creates a near-saturation-point slurry, far denser than the human body.
PHOTO COURTESY OF DESERT SERENITY FLOAT

Cell phone off, body cleansed, I dip a toe into Desert Serenity Float’s pod, a one-person, egg-shaped pool. The water is warm, dense, and inviting. As I ease in, buoyancy takes over and my body naturally reclines into effortless suspension. The result is nearly instantaneous — pure, untethered relaxation.

Soft music plays a few more moments, but I kill the music immediately. I’m a fan of silence and solitude, and this is as close to perfection as I’ve ever experienced. Here, with complete sensory stimulation removed, my mind can travel to a pristine mountaintop, sunlit sandy beach, date-scented desert oasis, or exist without thought at all. I am everywhere and nowhere at once.

Float pods, the 1954 brainchild of controversial neuroscientist and writer John C. Lilly (think Day of the Dolphin), explore the mind’s potential while in a completely restful, sensory-deprived state. The benefits include physiological and emotional influences, as well as neurological. Greater Palm Springs residents and visitors don’t have to travel far to try it for themselves. Michael Reiter and Denise Gilbert opened Desert Serenity Float in Palm Desert in 2016 based on Reiter’s foremothers’ beliefs. “It turns out Grandma was right after all,” he says. “Epsom salts heal.”

These salts he refers to are the 200 pounds of pharmaceutical-grade magnesium sulfate, aka Epsom salts, added to the warm water. This creates a near-saturation-point slurry, far denser than the human body. The result is floating as if gravity doesn’t exist. It’s similar to doing a back float in the deep end of a swimming pool. But there’s no breath regulation to control the sinking of the torso and no waves to distract the mind. In fact, floating doesn’t even require swimming ability.

Desert Serenity Float perfected the float experience with well-trained staff versed in educating interested clients about the process. A six-minute video completes the orientation with a history of floating and expected benefits. After taking clients on a tour of the post-float relaxation room, stocked with water, tea, and nibbles (cookies!), staff welcome floaters-to-be into their private rooms, review the showering process, and retreat.

Since opening, Serenity Float Spa has added related self-care services to its menu. Massages and facials are available as a stand-alone or add-on practice.

The results are magical, nearly medicinal for regular floaters. “Because the body is weightless,” Reiter says, “the body can begin to repair muscular damage without the pressure associated with traditional exercise.”

He should know — he has first-hand knowledge of how powerful the healing effects can be. With a back injury, and desperate for relief from constant pain, he tried floating back in the 1980s. He visited a facility weekly on faith alone and began to see improvement in his pain level almost immediately. When he moved to a new location without a float practice, the benefits remained. 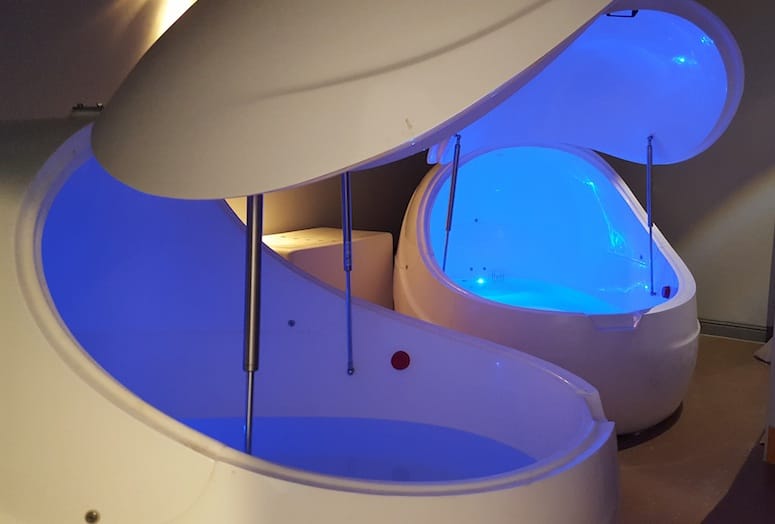 PHOTO BY LORI POLLARD-JOHNSON
Desert Serenity Float opened its Palm Springs location in August where couples can experience floating in the same room.

Sciatica re-emerged in 2007, though, and doctors recommended surgery. Eager to avoid the surgeon’s scalpel, Reiter sought out float services once more. And again he committed to weekly drives to San Diego to float. Relief arrived shortly thereafter. Then, it dawned on him: Why not open a float service here in the valley? But first, he wanted Gilbert on board, and to do that, she had to try floating.

The first experience challenged her ability to sit still. “I kept getting in and out and in and out,” Gilbert says, laughing. “It’s tough to let go of responsibilities. But once I did, I couldn’t believe how great I felt!”

This is common during the first float. The world demands a lot every day, causing what is popularly referred to as “monkey brain.” But the resulting sense of peace continues long past the float session. Clients describe greater calm and focus after floating, as well as a reduction of chronic inflammatory or injury-related pain. They cite relief from arthritis, high blood pressure and fibromyalgia, and even the easing of PTSD symptoms. Additionally, the magnesium sulfate acts as a natural organic detoxifier, cleansing the system.

Gilbert was hooked and the two drew up a business plan for Desert Serenity Float. Their initial expectations have been surpassed. “I enjoy seeing people’s faces when they come out, even when there are happy tears,” Gilbert says. “I run a business during the week, but I wake every Saturday morning knowing I’m going to brighten someone’s day with a float.”

As demand for floating and the related massage and skin care services at their Palm Desert location increased, Reiter and Gilbert decided to open a second location in Palm Springs. “We offer floating for individuals and couples in cabins [glass-walled tubs] or tandem pods at the Palm Springs location,” Reiter says. Their new space is tucked away, just off Palm Canyon Drive, and features the most up-to-date cabins, pods, and filtration systems. Currently, it’s open by appointment only. 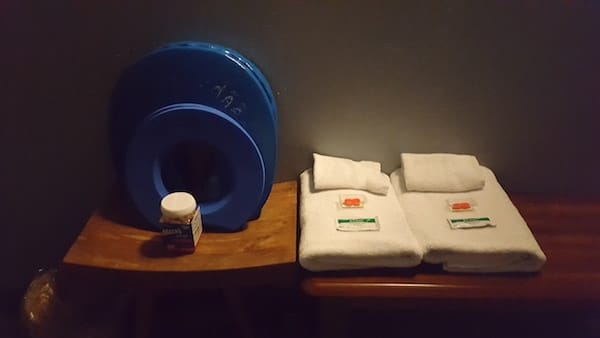 PHOTO BY LORI POLLARD-JOHNSON
Amenities include towels and washcloths for the after-floating shower, two kinds of earplugs, and two kinds of headrests (blue ovals).

One of their new devotees is me. As I raise the pod door and sit up, a river of healing waters cascading down my spine, I realize the float has been as effective in releasing my airline seat–fatigued body as the massage I had three days prior. My cervical spine has corrected its alignment on its own and my lumbar tension has released, leaving my legs feeling rejuvenated. A new spring in my step, I book another visit on my way out. But next time, I’m treating myself to a float and a massage.