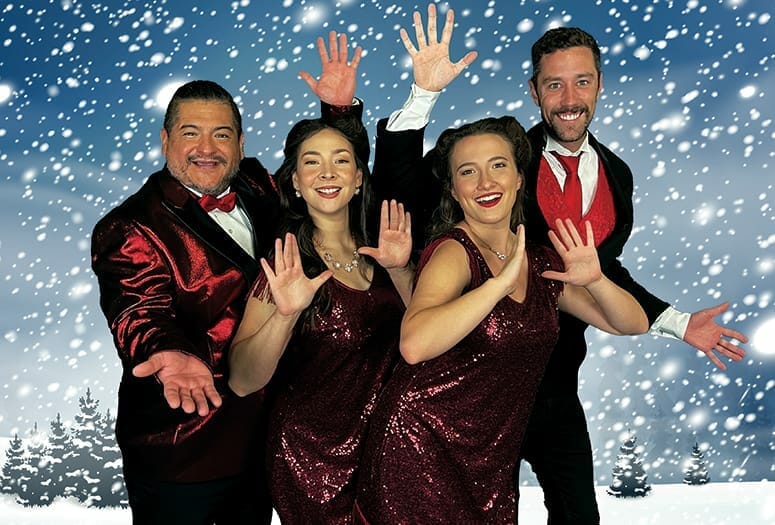 As the holiday season rolls around, familiar Irving Berlin carols are bound to get stuck in your head — namely the title song from the 1954 flick White Christmas. This month, the Indio performing arts group Desert TheatreWorks puts on a live-action version of the musical. It kicks off Dec. 10 with a special opening-day celebration in which veterans have been invited to sing along to that snowy classic onstage alongside the actors.

The heartwarming Christmas tale follows singers Bob Wallace and Phil Davis on a trip to Vermont. With plans to perform with sister act Betty and Judy Haynes, the two men run into their World War II commander, Gen. Waverly. After discovering Waverly’s countryside inn is having financial troubles, they decide to throw a big stage performance to help rescue the property.

Desert TheatreWorks honors this feel-good Berlin tale by inviting veterans to sing the “White Christmas” carol with them during the opening performance, Dec. 10 at 2 p.m. Seventy-two seats will be reserved for designated veterans who would like to join in on the carol. (USO veterans wishing to participate should contact Desert TheatreWorks communications coordinator Cydney Krone directly for tickets. For contact information, visit dtworks.org.)

We caught up with Krone to hear more about what makes this production so special. 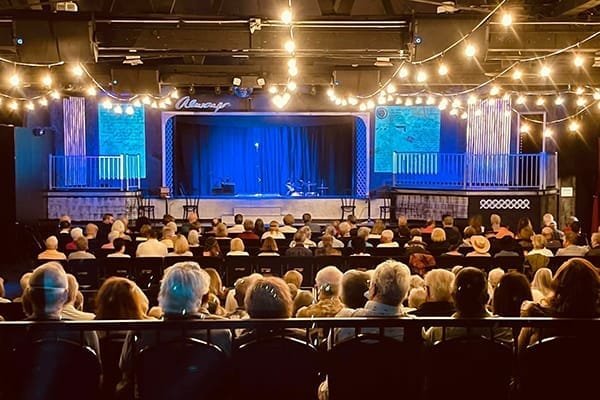 For those not familiar, tell us a little bit about the play’s story.

A lot of people are familiar with the movie, but not a lot have seen the onstage musical. Betty, Judy, Phil, and Bob plan a Yuletide musical extravaganza that puts Gen. Waverly and his business back together. There’s also a love story that flows throughout the story as well. Gen. Waverly and Martha, who runs the inn, have this sort of love story. Judy and Phil are flirty as the younger, more energetic couple. Bob and Betty are more reserved as the older siblings of sorts.

How did Desert TheatreWorks get involved with this White Christmas story? Whose idea was it to invite the USO?

Lance, our artistic director who chooses the shows, has always wanted to do White Christmas. Me and my CEO, Ron Philips, came up with the idea of inviting the USO to the opening performance, and that sparked the idea. I had the idea of doing spotlight stories of every performance, depending what the story is about. When I [suggested] for White Christmas, we should highlight a veteran in town, the idea sparked of, “Why don’t they sing onstage with us and sing “White Christmas”? Our tagline at Desert TheatreWorks is that we are a family, but our audience is just as much a family. That was my thought, and that it would also be really great for the audience to see. Just as people like to see professional performances, I think a lot of people enjoy Christmas carols because everyone is singing. The show highlights the troops, but also, normal people singing a Christmas carol brings a warm holiday feeling.

Why was it important to Desert TheatreWorks to honor and include veterans?

I think it’s really important to give veterans a center of community. They are around people who don’t understand what they’ve been through. Shared spaces with veterans, where they can all be together, is important. It also feels crazy to not have veterans there, as it’s a show that honors them. They deserve to be there.

What would you say is the original message behind the story of White Christmas?

It’s a classic Christmas show that everyone wants to see. You have the couple that everybody’s rooting for, and everyone wants to get back together, but they have baggage. Then you have the older couple. It really has that ’50s Hollywood [vibe]. I feel like it represents everybody that somebody can grasp onto. The older people can see older people and have some love going on. Then the more damaged people who have been hurt. Then the goofy people. It feels like everybody has a place in the story.

Read next:  Reminiscing on holidays of the desert's midcentury past.