From Desert X's inaugural year in 2017, the Mirage by Doug Aitken was an awe-inspiring site.
PHOTOGRAPHS BY LANCE GERBER

The sheer ambition of Desert X triggers a search for the right metaphor. It is a mirror held up to the transition zone between the Mojave and Sonoran deserts, reflecting the real and romanticized versions of both. A quest to capture that which is intrinsically elusive. A road trip, spinning from the crisp midcentury rooflines of Palm Springs to the wilder territories of hills and sand.

Desert X is a 10-week biennial exhibition of site-specific art, opening Feb. 9 and running through April 21. Artists use the Coachella Valley and Salton Sea as inspiration and setting. It’s free and open to the public, inviting the curious to trek from point to point, learning the subtleties, challenges, and singular beauty of the region.

It’s an excuse for art lovers to spend time outdoors, away from the mental and physical walls of galleries and museums. It emerges alongside the wildflowers, a super bloom of art and nature.

“You’re discovering these new areas that you haven’t been, and the journey is critical," says Susan Davis, Desert X’s founder and board president. “We’re asking contemporary artists to provide a lens through which visitors can see the Coachella Valley, and see it in a new and different way.”

The 2017 debut of Desert X was a breakout success, thanks to high-profile artists, a high-profile artistic director, Neville Wakefield, and a hefty dose of Instagrammability. Davis estimates that 200,000 people attended, five times what they had projected. 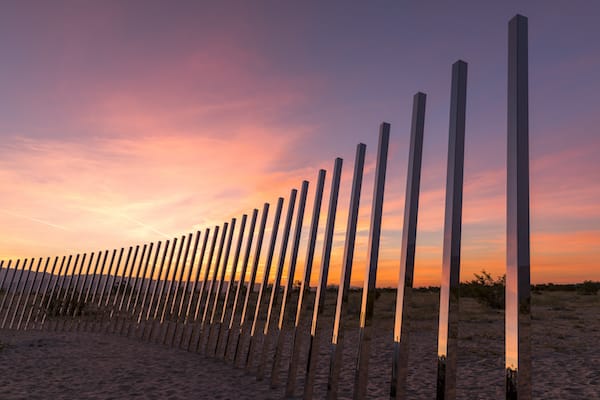 “Having Neville stay on as artistic director was the best way for us to move forward,” Davis says. “His genius made Desert X what it is. His vision, his understanding of the international contemporary art world, his ability to nurture relationships with artists and work with them to make their installations accessible to art world aficionados as well as those who perhaps have never set foot in a gallery. That sensitivity that he lends makes this project sing.”

To ensure that it’s not merely a trophy hunt for the perfect selfie, programming also expanded to include more artist talks, docent tours, and a bilingual website. What was a one-day symposium in 2017 has grown to three days of panel discussions and events at the Palm Springs Art Museum, Sunnylands Center & Gardens, and at art installations. Organizers have teamed up again with Digicom Learning of Palm Springs, allowing student filmmakers to follow six artists, tracking their work from concept to completion. The documentaries will be shown on the Digicom website and social media and at Digicom’s annual film festival May 17 at Palm Springs High School.

• Cecilia Bengolea, an Argentinean performance and video artist based in Paris, integrates dance with sculpture.

• Iván Argote, a Colombian artist based in Paris, has installed A Point of View, an interactive sculpture that will prove to be one of the most compelling installations in Desert X. The brutalist form refers to the pyramids, its steps contain messages in English and Spanish, and its platform projects the viewer into the landscape.

• Los Angeles-based artist Sterling Ruby’s fluorescent orange monolith, SPECTER, appears as an apparition, as if someone deleted a portion of the landscape using Photoshop.

• Acknowledging that the desert was under water six million years ago and, with climate change, could be again, the Danish collective Superflex built a form that is equally hospitable to human and marine life. Dive-In, a nod to another extinct species, the drive-in movie theater, will host screenings during Desert X. 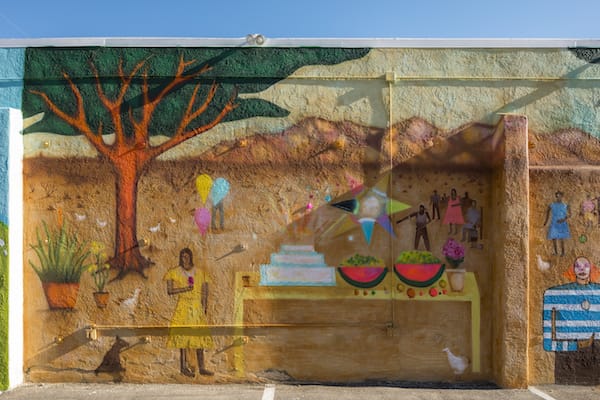 “The whole show is an artist-driven show,” Wakefield says. “As much as I’d like to take credit for the curation of it — and I think I speak for Matthew and Amanda — it’s the landscape, the place, that is providing the curatorial principle.”

“Artists in particular are drawn to this idea of contrast, which is very much foregrounded in the Coachella Valley,” he adds. “It’s different from the High Desert in that respect. It runs the full spectrum from the utopian midcentury vision of Palm Springs to the completely dystopic architecture of Mecca and the Salton Sea. It was a natural expansion to try to embrace this and explore it as another facet.”

The success of the first Desert X caught most people by surprise, occasionally producing friction when visitors flooded residential neighborhoods. This time, staff took extra steps to integrate artworks with the surrounding communities. Shuttle buses will transport visitors into environmentally sensitive areas, and attendance is limited for some sites. The spread of the artworks asks more effort from participants, but also creates the opportunity to absorb what’s been seen and anticipate what comes next.

“The first iteration had a slightly difficult approach, a problematic approach, of the desert as this idea of blank canvas, which it clearly is not,” Wakefield says. “With time and greater familiarity, all of us, myself included, become more receptive to the nuances. The ecological nuances in particular, but also the social and cultural nuances that are spread throughout.”

“It’s a nonprescriptive show. There’s no one telling you how to enter it or how to see it or how to orchestrate this experience. That’s somewhat unique,” he says. “As much as the show is about the refraction of the artists’ interests in the desert through these particular works, it’s also about encouraging the audience to explore the desert in their own time, and explore the spaces in between the works.” 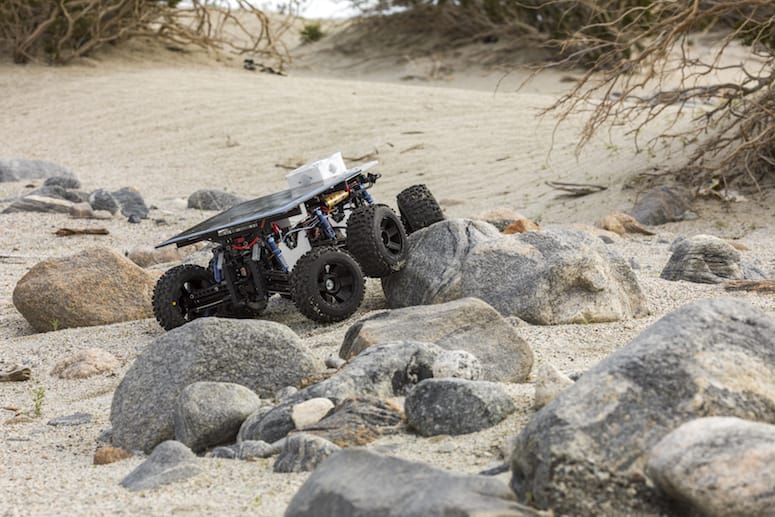 Artist Norma Jeane's Shybot actually disappeared for a year until it was found by Kyle Gomez, an off-roading Cathedral City resident.

As a metaphor for Desert X, Wakefield offers ShyBot, the errant six-wheeled roving robot created for the first exhibition by Italian artist Norma Jeane. ShyBot was programmed to avoid human contact — which it did so well that it disappeared for more than a year until it was discovered by Kyle Gomez, an off-roading Cathedral City resident. Now refurbished and reprogrammed, ShyBot is back, loose somewhere in the California desert.

“I always thought ShyBot was emblematic of my interest in the desert,” Wakefield says. “Here was a thing that you went in search of but you didn’t necessarily find. That kind of open-ended quest is both what draws us in, historically and spiritually, to the desert, but it’s also a metaphor for the show. It is a journey of exploration and discovery — and you don’t necessarily know what you’re going to encounter along the way.”