I came to AlUla, Saudi Arabia’s ancient desert region, like a pilgrim. Not on my way to Mecca, but on the new art world trail that now rivals the old incense routes to Yemen that traders traveled in Nabatean times. The contemporary art scene in Saudi — a part of the nationalist project since its midcentury origins — is having a moment. A prolific number of projects, timed with the easing of visa restrictions, is helping to end decades of cultural isolation. The latest initiatives — such as the Diryah Biennale and public art commissions in Riyadh, the opening of the Haay Jameel complex of independent galleries and studios in Jeddah, and the Jeddah edition of Bienal del Sur — were born of the impetus of Saudi’s Vision 2030 plan to modernize and develop the nation.

AlUla, a 2,000-year-old archaeological and historical site, has become a hot spot for artists and collectors. Recent milestones include the opening of the Maraya gallery, a giant cube of mirrored glass shimmering in the sand as if transported by some benevolent aesthete genie with a penchant for monumental architectural gestures. It currently features a survey of Saudi art called What Lies Within from the private collection of Basma al Sulaiman, the Saudi royal and patron of the arts; like Desert X, it is part of the AlUla Arts Festival. And a five-year memorandum was signed in November 2021 between the Royal Commission of AlUla (RCU) and UNESCO for a “strategic cross-cultural partnership” for the development of the culturally significant Saudi Arabian province that includes the Nabatean ruins of Hegra, inscribed as a UNESCO World Heritage site in 2008. 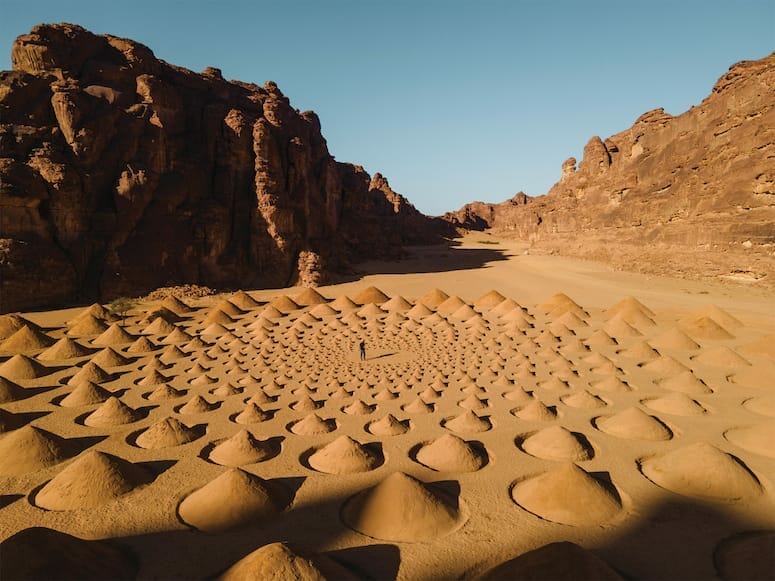 I came here in February to attend the second iteration Desert X AlUla, which links the Coachella Valley with Saudi Arabian deserts through site-specific installations by 15 artists incorporating the themes of “mirage” and “oasis.” Controversial in the Coachella Valley because of its alleged elitist art washing and financing by a regime with a record of human rights abuses, it is a crucible of art and commerce, politics and culture, internationalism, and selective moral outrage. While Yemeni frankincense was once the hot commodity, it’s now arms dealing and proxy wars — sponsored by a variety of regional players as well as by the same nations that are home to some of the most vociferous critics of the Saudi regime. Thanks to enthusiastic offerings of sweetheart deals with international companies, there is now more foreign capital in Saudi than Dubai.

Susan Davis, founder and president of Desert X, says the Saudi iteration came about through person-to-person diplomacy, rather than any international intrigue. The connector was Los Angeles–based artist, collector, and Saudi royal Sultan Bin Fahad, whose work “Desert Kite” appears in this year’s show. The mud structure with a mirrored façade housing an urn-like sculpture embellished with protective symbols from Nabatean tombs — that could be a trap or a treasure — offers an apt visual metaphor for the entire exercise. Bin Fahad came to Desert X in the Coachella Valley in 2019 and contacted Davis through a mutual friend after seeing an intrinsic connection between the desert environments as well as an opportunity to connect Saudi and international artmakers.

If Desert X AlUla had a theme song, it would be David Bowie’s “The Secret Life of Arabia.” Like the song with its lush, multilayered production and exotic melodies, the festival plays on Western fascination with a place often wrongly portrayed as a cultural monolith and reveals some interesting chord changes. 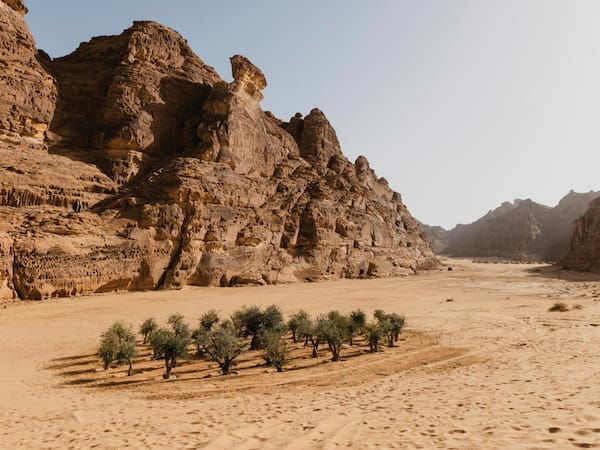 Khalil Rabah created a mirage of an orchard of olive trees.
The site of the inaugural Desert X AlUla is now a luxury resort, and the location of this year’s show comprises four canyons in the Al Mu’tadil valley, where, as per the mirage theme, it’s hard to tell where the installations end and the lunar desert landscape begins. Locals traditionally avoided the area, which was said to be home to the djinn, or genies, who are also nature spirits/guardians of the land. But with recent interest in Saudi’s pre-Islamic heritage, the valley full of Nabatean petroglyphs is a fitting home for the installations inspired by the land art movement of the 1960s and ’70s. 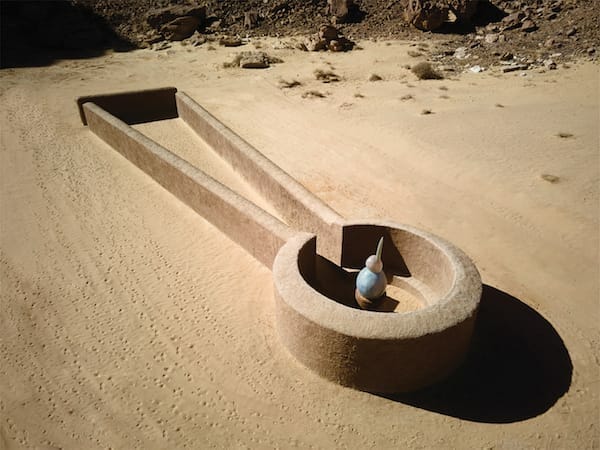 Curated by Reem Fadda, Raneem Farsi, and Desert X artistic director Neville Wakefield, who describes the desert as a “heterotopic space” onto which viewers can project what they like, as well as “a place of cultural interaction, dialogue, and exchange,” this Desert X AlUla was an intriguing device for both deflection and reflection. While organizers carefully avoided any direct mention of the larger Saudi political context, this is not unique to Desert X AlUla; one thinks of Russian and Chinese contemporary art contexts and the dangers of cultural boycotts from Israel to AlUla.

Desert X vice president Steve Nash spoke of “soft diplomacy,” and Ramallah-based artist Khalil Rabah, whose “mirage” of an olive tree orchard described in a press release as “living things displaced from their indigenous land and longing to be repatriated,” rejects being pinned down to any specific Palestinian context as “racist.”

Jim Denevan’s “Angel of Repose” — a mesmeric sand sculpture made with the help of local volunteers and consisting of concentric circles of hundreds of triangular sand mounds “less grainy than Californian sand,” he said — blended seamlessly into the desert landscape. A perfect offering to local djinn, it evoked the urge to dance, although Alicia Keys beat me to it on opening day. 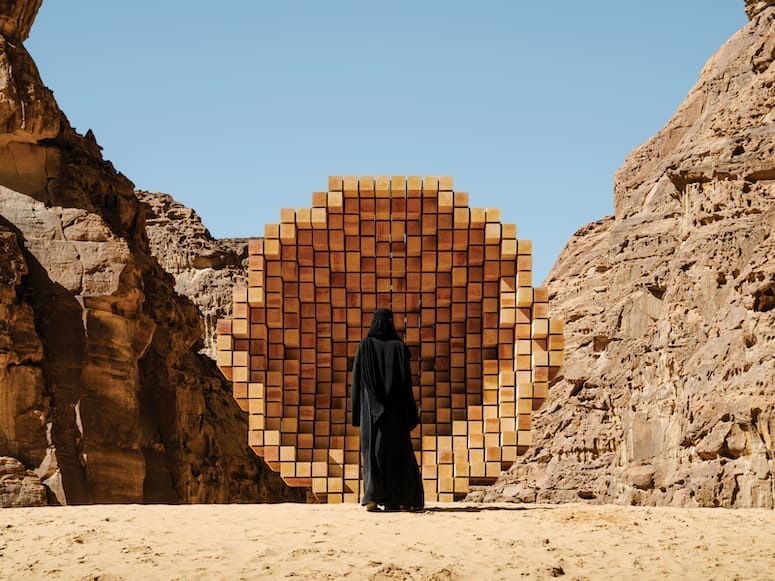 Alicja Kwade’s “Blur,” with built architectural structures reflecting and framing the natural artifacts she encountered on the desert floor, offered constantly changing perspectives, enhanced by shadow and light, evoking the fine line between reality and illusion. Next to it, Jeddah-based Dana Awartani’s “Where the Dwellers Lay” allowed participants to literally inhabit the art and use the concave geometric sculpture evoking a Nabatean tomb as a place of repose.

Polish artist Monika Sosnowska’s sculpture made of heritage rails from the Hejaz railway, bent to resemble dried grasses, evoked the memory of a time when Brits like Lawrence of Arabia helped locals blow up the Ottoman railway — before their great betrayal. Now, many of Lawrence’s compatriots are helping turn AlUla into a cultural hub, one that will hopefully avoid any neocolonial excesses and genuinely include local communities, as the RCU runs programs encouraging the revival of traditional crafts. 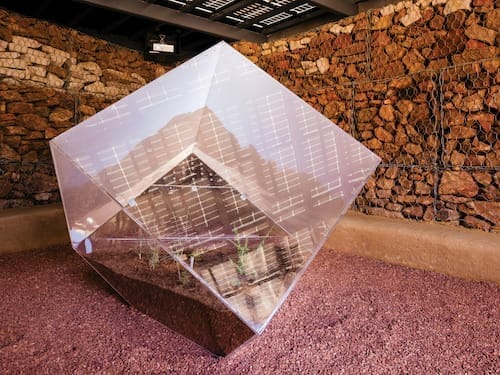 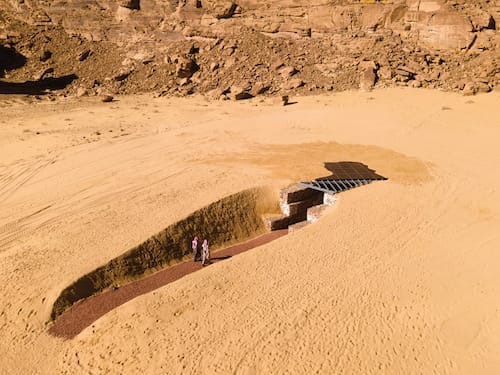 Riyadh-based Ayman Zedani’s soundscape installation, encountered via a hike up a rocky hill, allowed the earth to speak, quite literally, with Arabic names of local flora blending to create something akin to the songs of the djinn. And Los Angeles–based Canadian artist Stephanie Deumer’s biosphere-inspired underground greenhouse — with solar panels assisting a native plant to flourish by way of an energy feedback loop — was a reminder of the larger climate realities that bind us.

As the desert sun shone down on a heated crowd of artists, organizers, and journalists in a makeshift circular open-air structure, I realized we were the installation, a site-specific mass of humanity joining the surrounding works in a celebration of place. That moment alone made the pilgrimage worthwhile.