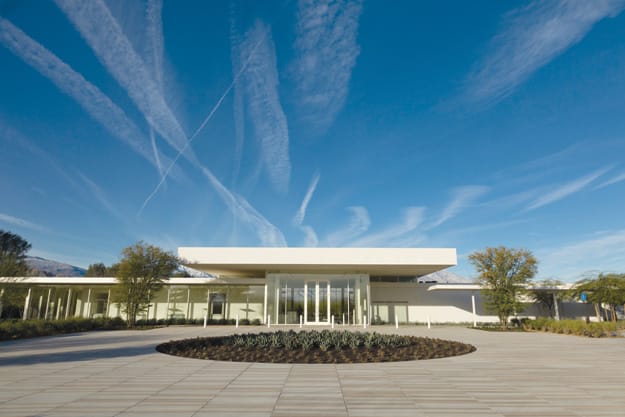 In creating the visitor center at the Annenberg Retreat at Sunnylands, designer Michael Smith of Santa Monica sought to capture the timeless appeal, historically and visually, of Walter and Leonore Annenberg’s Rancho Mirage estate by referencing their residence without copying it.

“The most important thing was to make it relate to the house, but not in any way detract from any of the magic of the house,” he says. “It’s not imitating the house in any way; it’s just instilled with the feel of some of the elements. It frames your experience as a visitor.

“It’s sort of a fluid, living thing,” he continues. “By creating this new moment for Sunnylands, it actually extends history, as opposed to being something that’s just flat. It’s going to go on for a long time and be appreciated by a lot of people.”

The décor, both at the house and at the visitor center, showcases not only the Annenbergs’ design aesthetic, but also who they were as people. They were a perfect pair — a matched set, says longtime friend Betty Barker. This shines through in the pattern of furniture groupings throughout the main house and, now, the visitor center.

“It reflects their sharing with each other, and it reflects their wanting to share with their guests,” Barker says. “They were such an amazing team; I always thought of them as so supportive of each other. He always called her Mother — I never heard him call her Lee.”

Working closely with the building’s architect, Frederick Fisher of Los Angeles, Smith envisioned “a doorway, in a sense, to the house.

“It should have elements like the lava walls — a reference to pairs of lava walls at the Annenberg house — and things that reference the iconic stature of the house, not just historically, but also architecturally,” he says.

The two 16-foot-tall lava walls he refers to face north and south in the visitor center “living room.” Between them, facing west, is floor-to-ceiling glass offering garden and mountain views.

Building the walls took a year of research, painstaking attention to detail, and 15 days’ labor by six workers. Since the quarry that supplied the stones for the residence closed and lava is rarely used in blocks today, Sun Valley-based SMG Stone Co. spent months researching suppliers before choosing a quarry in Utah to provide the raw material. Large boulders — in burgundy, red, brown, and gray — were shipped to Bakersfield, where they were cut into slabs with a special saw. From there, the slabs journeyed to SMG’s shop to be further trimmed into tiles. The wall pattern was laid out on the shop floor stone by stone in consultation with the architect. Each tile was then numbered and shipped to Sunnylands for installation. Each wall holds about 700 tiles.

While the walls clearly reference those at the main house, they are not duplicates. The tiles at the visitor center are smoother, which suits the center’s sleek interior. They are also a few inches larger (10.5 inches square versus 8 inches square) to reflect scale: The center’s ceiling is about 16 feet high; the atrium walls in the home are 11 feet tall.

STRIKING BALANCE
According to Mary Perry, Sunnylands’ spokeswoman, Leonore Annenberg “had a wonderful eye for color” and was particularly fond of pink, yellow, and celadon green walls for her house. Although the visitor center’s informational panels are cast in “Sunnylands Yellow,” the walls are soft white. The neutral color palette was both an artistic and a practical choice, Smith explains. It works well with the lava walls and the greenery of the outside gardens and avoids distracting attention from exhibitions. “It has to be extraordinarily flexible for a variety of different kinds of exhibitions,” he says. “We wanted it to be influenced by but not take away from the specialness of the house. It needs to function and be very practical.”

“The goal,” says Janice Lyle, director of the museum and gardens, “was to create a welcoming, comfortable, relaxing space that’s like a living room that visitors could enjoy as they take in the spectacular view of the mountains that the building frames.”

This echoes Barker’s recollections of the Annenbergs as a “cozy family” who enjoyed entertaining friends in the game room, situated between the yellow and pink suites in the wing where all guests stayed. The game room overlooking the pool was a favorite retreat for the Annenbergs and their guests, Barker says. “We didn’t eat in the formal dining room. We ate in the game room. That was the center of activities.”

Activities included watching movies on a large screen. When the Annenbergs weren’t formally entertaining, they were often ensconced in another pastime: backgammon.

The great room at the visitor center also invites guests to relax. Two beige sofas with tapered, square wooden legs face off from the east and west, placed precisely on the outer edges of a large area rug whose wide, textured stripes of multihued sand and rust tones run parallel to the sofa. Cubed, wooden coffee tables — evoking the warm browns of the lava walls — stand guard next to the sofas.

“The conversation cluster is a signature William Haines look, and the low chairs for ‘long-leg posing’ were a signature of his,” says Anne Rowe, director of collections and exhibitions. “This absolutely references the way things were clustered and paired in the house.”

At right angles and in precise proportion, two pairs of beige chairs face each other, flanking two more cube tables. The layout is mirrored exactly on both sides of the room. “Part of Mrs. Annenberg’s particular design sensi-bility was to have a symmetrical balance,” Lyle says. “There’s a true dedication to balance in the home and symmetry here.

“The Annenbergs followed William Haines’ and Ted Graber’s designs and kept them relatively unchanged the entire time they lived there. They might make a change based on a fabric wearing out, but they would go back to either William Haines or Ted Graber or to Peter Schifando, who took over that business. So the aesthetic was always a single kind of aesthetic,” Lyle says. “They were very consistent in the design of the home.”

Finishing touches such as coffee tables and lamps at the visitor center are still in the works, but the lamps will come from the Annenberg house. “We’re going to bring over some original mid-century lamps that were used in the house that weren’t part of the core design for auxiliary spaces and test them here,” Rowe says.

In that vein, the center opted to use custom terrazzo flooring throughout — white with flecks of earth tones. “Originally the idea was to reference the A. Quincy Jones-designed house, which has pink marble floors, over here at the center; and we determined during the building process that, for a public space that anticipates a significant attendance during the year, marble wasn’t the appropriate material to use. Terrazzo also fit better in the general midcentury-modern style,” Lyle says.

“Terrazzo is actually very green,” Lyle says. “It was chosen by Michael Smith and the architect, Fred Fisher, to be at once
subtle and lively. So there is some action going on in the way in which these particular pieces and these particular colors formed a pattern.”

A neutral-shade carpet made from re-cycled materials constitutes the flooring in the theater room, which will accommodate 47 people. For movie-viewing ease, built-in shades can be closed to the sun on the west-facing wall. The east wall features colorful
images of objects from the Annenberg estate, reproduced on tan acoustic fabric panels.

“It enlivens the space and gives people an introduction to the range of objects in the Sunnylands Collection, such as a cloisonné table, Steuben glass, porcelain and silver gilt pieces, and fabric from one of the sofas,” Lyle says. One panel shows a portion of the Hindu temple door panels displayed in the hall leading to the residence’s private wing.

White Donghia stacking chairs in the theater, café, and studio areas evoke the house’s William Haines chairs in shape and style without copying them. “Yet they are contemporary enough to be really useful,” Lyle says. “They’re actually really comfortable as well.”

The multimedia stations along the walls of the exhibition room — made from light wood and inspired by Haines designs — feature wheelchair-accessible, rectangular tables that function as desks. Flat screens are mounted above each desk, with slim, black desktop touch screens and overhead audio feeds.

The Sunnylands Yellow informational panels cover diverse topics, from midcentury modern architecture to environmental sustainability. Pocket doors open to the sun-drenched art exhibition hallway along the front (east-facing side) of the building. Tall glass cases are spread along the outer glass wall, offering plenty of room to stop and admire. The exhibits will change annually and feature only art that is not light sensitive.

“This provides a neutral space with good light to display objects from the Sunnylands Collection,” Rowe says. “The first exhibition will be English silver gilt. The Annenbergs began collecting it in the mid-’50s and assembled a very important collection, including a lot of pieces that were in the royal collection.”

The visitor center gift shop with a long, pale onyx counter and neutral walls faces a bank of trim white lockers available to visitors. The wall color continues, but terrazzo flooring gives way to gray polished concrete in the center’s studio area, created as a multipurpose room to accommodate groups of up to 120 people. Sleek, utilitarian, floor-to-ceiling white cabinets line the walls.

At the back of the center, more glass, simple white tables, and more Donghia chairs dot the café. The feel is airy, friendly, and approachable. Photographs of the Annenbergs at play adorn the walls. A chrome-framed glass dis-play case winks humorously to the Annenbergs and their famous guests: It holds 72 golf balls retrieved from the property’s lakes and emblazoned with famous logos and names such as “Nixon,” “Macleans Toothpaste,” “Hogan,” “Mr. Ambassador,” and, simply, “Lee.”

This visitor center is meant to give people an experience and a true understanding of whom the Annenbergs were.

“I think people rode by [Sunnylands] and wondered what was behind the pink walls,” Barker says. “They were real people. They were such a team. And they were remarkable people.”

More Information on Sunnylands: Reflecting On The Past »»