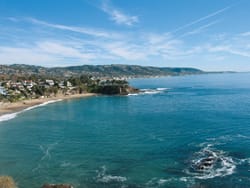 Every California dream, past and present, locks in the iconic wedge of Pacific coastline now known as The O.C. — hyped to the point of cliché for its wealth and status. However, the dream teeters close to reality when considering the richness of the area’s nonpareil landscape and its cornucopia of culture and lifestyles.
photo galllery

Back to the Beach

Crystal Cove State Park, the Southland’s largest stretch of undeveloped coastline, provides an expanse of beach roiled by waves, bisected by wooded canyons, and backed by sandstone cliffs. Secluded west of busy Pacific Coast Highway, the park wends over three miles of beach between Laguna and Corona del Mar and extends eastward into the hills around El Moro Canyon.

Rocky outcroppings and the dramatic cliffs create a picturesque background for the wealth of tide pools and shoreline comprising the Irvine Coast Marine Life Refuge.

A few dozen old beach cottages tuck into the rocks. Little altered since their construction in the 1920s, the wood-frame cottages appear on the National Register of Historic Places and are available for rent through California State Parks.

Among them stands the Beachcomber, an atmospheric beachside café serving salads, sushi, and burgers. Guests dine and watch sea kayaks ply the water from a beachside terrace. Perched high on the cliff above, the timeworn Shake Shack offers old-fashioned fare.

In the beginning, visitors could reach Laguna only by an old Indian trail road that snaked through Laguna Canyon, discouraging early land developers. When the automobile came into broad use, that relative isolation ended. In 1927, screen stars Mary Pickford and Douglas Fairbanks cut the ribbon at ceremonies opening a new stretch of PCH and new north-south access.

Motorists soon discovered coastal pleasures, while Hollywood unleashed Crystal Cove’s potential as a movie location, filming scores of films, from Treasure Island in 1918 to Beaches in 1988.

Today, beaches and secluded coves beckon swimmers, divers, and hikers to surf-lashed rocks and lush greenbelts running to the sea, weaving the scenic tapestry of a town that has retained its character. Funky cafés, one-of-a-kind architecture, and quaint shops prevail.

Art defines Laguna. Dozens of artists who discovered its Riviera-like light at the turn of the century stayed to develop an art colony. Now in its 88th year, Laguna Art Museum grew from that original association of plein air artists who painted in the style of the French Impressionists. Today, more than 90 galleries specialize in art and antiques. Three art festivals unfold every summer in Laguna Canyon:

A year-round art walk through galleries from 6 to 9 p.m. on the first Thursday of every month and a strong art-in-public-places program secure the historical ties to art.

Laguna Art Museum, the county’s oldest art institution, has merged with the Orange County Museum of Art. Emphasizing the development of modern art in California, it has mounted acclaimed exhibitions such as Picasso to Pollack. The Bowers Museum in Santa Ana, with its current exhibit Mummies: Death and the Afterlife in Ancient Egypt, displays the largest collection of mummies and funerary items to leave The British Museum.

Architecture has been described as “frozen music,” a term that well may apply to the 2,000-seat concert hall created by architect Cesar Pelli. “This is the Stradivarius of concert halls,” says Carl St. Clair, music director of Pacific Symphony, the resident orchestra. The design team included Artec, a company world famous for creating unequaled theater acoustics. ”It’s going to be the flagship that establishes Orange County as the next driving music center in America,” St. Clair says.

If Laguna Beach embodies the funkiness and idyllic landscape of Orange County, Newport Beach is the thriving paradigm of culture and lifestyle today.

Pinpoint its beginning to 1905 when Los Angeles’ Red Car Line, an electric railway system, was extended to Newport Beach. It brought such a daily horde of beach-lovers that within 10 days residents erected a hotel to accommodate them and began construction of the Balboa Pavilion, now a Newport Beach icon.

A year later, Newport Beach officially became a city. Seeing the real estate potential, businessman William Collins dug a channel on the north side of the bay, using dredged sand and silt to build up Balboa Island. Eager investors followed, and the city began a series of dredging projects to encourage boat traffic. By the 1920s, Lido and Balboa islands had become charming communities and a haven for boaters.

Newport Beach also attracted movie stars such as Errol Flynn and John Wayne (who, due to a bodysurfing injury sustained at the Balboa Pier, was forced to abandon his USC football career and pursue acting). Wayne counted himself a longtime resident, and the city is honoring the 100th anniversary of his 1907 birth with a yearlong celebration.

If Orange County is fast becoming the paradigm for Southern California arts and culture, it hasn’t missed a beat with the equally well-heeled shopping audience. This merger of art and shopping makes more magic in Costa Mesa. From the Richard Serra sculpture defining the Performing Arts Center, you can saunter across the footbridge over busy Bristol Street, through the grassy Noguchi sculpture garden, and into South Coast Plaza. This department store-laden, designer-filled, restaurant-happy delight has grown into the highest-grossing retail center in the United States.

Another can’t-miss choice is to check out the adjacent Island Hotel, recently converted from a Four Seasons operation and equally first rate. Its Pavilion Restaurant has won honors for innovative dishes featuring American and Mediterranean cuisine.

Where the Locals Go

South of Newport lies Corona del Mar, a low-key village with small shops, one of California’s best beaches, and a real hidden treasure. Sherman Library and Gardens, a lavishly planted, two-acre botanical garden bordering Pacific Coast Highway, remains a quiet enclave maintained as a setting for a research library of the Pacific Southwest. Visitors who make advance reservations can enjoy an elegant luncheon in the garden, then explore the fascinating gift shop.