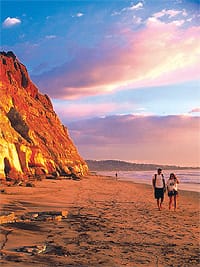 High-rise buildings shimmer over the vast waters of its bustling bay. Chic restaurants and boutique hotels fill its nooks and crannies. The Padres hit home runs in their splashy Petco Stadium. And the revamped Gaslight Quarter makes history come alive.

It’s no wonder Condé Nast Traveler ranks San Diego ninth on its top 10 list of best cities in the United States or that Travel + Leisure rates it No. 1 for best weather and No. 2 for having the most attractive, active people. California’s second-largest city, San Diego offers cosmopolitan, cultural, and outdoor activities in a sun-drenched, seaside setting.

That natural splendor has remained unchanged since Spanish sea captain Juan Cabrillo sailed into the harbor in 1541 and encountered the native Kumeyaay, a peaceful, migrant tribe of Indians. His expedition was followed by Sebastian Vizcaino, seeking safe harbor for Spain’s Manila galleons, and finally by Gaspar de Portola, whose soon-to-be-famed passenger Father Junipero Serra would build the first link in California’s chain of missions in 1769. Galleries of the Spanish colonial-style Serra Museum in western Mission Valley contain exhibits concentrating on that early history.

The region’s amenable climate assures prolific botanical growth year-round. Late spring visitors who miss the desert wildflowers and seasonal blooms in the exuberant Flower Fields of Carlsbad can find stimulation at the San Diego Zoo’s Garden of Senses Celebration of foliage, food, and fragrant blossoms held the weekend of May 17. Or sign on for an Offshoot Tour at Balboa Park to one of the World Rose Society’s top l6 gardens. If fauna tops flora on your list, don’t miss Bear Awareness Days, May 8-11, when the park showcases its collection of pandas, polar bears, sloth bears, and grizzlies. And Sea World stays open until 9 p.m., featuring new nighttime shows with sea lions and Shamu.

With Mexico just across the border, San Diego celebrates Cinco de Mayo to the hilt. Old Town State Historic Park is the venue for the 25th annual festival with historical re-enactments, while the Gaslamp Quarter features mariachis, ballet folklorico, and Mexican drinks and food.

It’s a town that embraces a range of culture: the knee-slapping Blues and Crawfish Festival at Spanish Landing on Harbor Island runs May 9-11, a time when San Diego Opera is staging George Bizet’s The Pearl Fishers and City Ballet performs Man of La Mancha. Opening Sept. 18 and running to August 2009 is a citywide exhibition of works by Bernar Venet. Eighteen sculptures will be scattered about the waterfront, and two pieces will be installed at the San Diego Museum of Art and Museum of Contemporary Art. Performances pieces by the artist will be presented at both museums.

Geologically, San Diego may be a coastal desert, but culturally it’s a fertile oasis awash in the arts. Balboa Park, an idyllic sylvan retreat and cultural haven, houses a diverse assemblage of educational buildings. It began in 1915, when Balboa became the setting for the Panama-California Exposition, a yearlong world fair aiming to promote San Diego as the United States’ first West Coast port of call from the newly opened Panama Canal. As one of its features, the fair kept a small menagerie of animals that came to form the core of the San Diego Zoo, today one of the most celebrated zoological parks in the world.

In 1933, philanthropist Ellen Browning Scripps funded the Natural History Museum, complete with a Foucault pendulum, allosaur skeleton, and the Hall of Mineralogy, entered through a recreated mine tunnel. Its current exhibition, A Day in Pompeii, explores the fateful eruption of Mt. Vesuvius in Italy 2,000 years ago. The exhibit showcases eight body casts of Pompeians caught in their last moments, made from cavities left in the ash after the burned bodies decomposed. Benefactors Amelia and Appleton Bridges donated funds for construction of the Fine Arts Gallery of San Diego. Opened in 1926 and later renamed the San Diego Museum of Art, the city’s first art museum remains its most pre-eminent.

Important figures from early state history and a massive dome covered in Moorish tiles adorn the California Building, which houses a hundred-bell carillon that chimes the quarter-hour through the Plaza de Panama. Its Museum of Man displays life-size replicas from the Mayan city Quirigua that date from 780 A.D. The collection includes a cast of the fossil skeleton Lucy, as well as artifacts and mummies from ancient Egypt. A planetarium theater and museum of physical sciences share the Spanish colonial-style Reuben H. Fleet Theatre and Science Center built in 1973.

Casa de Balboa opened in 1980 and houses four museums that focus on San Diego history, sports, photographic arts, and model railroads. Founded in 1963, the San Diego Aerospace Museum chronicles the history of flight with 66 full-size vintage aircraft. Adjacent is the San Diego Automotive Museum with changing thematic displays of automobiles and motorcycles. Near the park’s northwestern corner stands the recently restored Marston House, a 1905 arts and crafts-style mansion built by Irving Gill and landscaped by noted designers, including Kate Sessions.

More modern cultural satisfactions abide in the newly upscaled Columbia neighborhood stretching toward the Broadway Pier on San Diego Bay. A year ago, the Museum of Contemporary Art branched out from its La Jolla base to open a downtown expansion in the baggage building of the Santa Fe Depot, a nationally registered historic landmark built in 1915 in the Spanish mission colonial revival style for the Panama-California Exposition.

Also on the waterfront are the USS Midway Museum aboard America’s longest-serving aircraft carrier, with exhibits and tours exploring its rich history. Nearby floats the Maritime Museum of San Diego, a collection of historic ships, including the Star of India, the world’s oldest active sailing ship. Along the bay front stand life-size sculptures of fantastical trees made of steel, glass, tiles, copper, wood, and canvas created by local artists in a public art project of the Port of San Diego.

That San Diego is showing an updated face can be seen most dramatically in renewal of the historic downtown Gaslamp Quarter, 16 blocks of Victorian-era buildings listed on the National Register of Historic Places. With more than 100 restaurants, some 40 nightclubs and bars, and 100 retail shops, this has become one of the city’s hottest neighborhoods. When the Hard Rock Hotel opened last November, it snagged acclaimed Chef Nobu Matsuhisa’s restaurant Nobu, which specializes in creative Japanese cuisine. One of 16 Nobu restaurants worldwide, the San Diego eatery breaks culinary rules, offering dishes such as yellowtail tuna with jalapeño and a signature black cod with truffles. The New York Times has recognized Nobu’s Beverly Hills Matsuhisa as one of the top 10 restaurants in the world. It’s already shaking up the traditional dining scene and could serve as a symbol of San Diego’s new culinary cutting edge.

Rama (Gaslamp Quarter)
327 Fourth Ave.; (619) 501-8424. First-rate Asian Thai in an atmospheric setting and some of the best Asian food in Southern California.

• Having a drink on the 22nd floor Altitude in the San Diego Marriott in the Gaslamp Quarter to savor breathtaking views of Petco Park and the San Diego waterfront.

• Peanut butter waffles on the marina at funky Café 222, a local breakfast favorite.

• Enjoying a live arts performance at the recently restored Balboa Theatre at Horton Plaza. Listed on the National Register of Historic Places, the theater reflects a blend of 1920s design elements.

• Visiting Stingaree and harkening back to the days when the Gaslamp Quarter was the red-light district. The splashy restaurant/lounge sports floor-to-ceiling waterfalls and a rooftop bar retreat.

• William Heath Davis Historical House Museum, the oldest surviving structure in the Gaslamp Quarter is a saltbox-style home that was shipped around Cape Horn and reassembled in 1850.

• Dipping your toes in the heated sand at a cabana on the popular rooftop Beach Bar at the edgy W hotel.

• A horse-drawn carriage ride along the Embarcadero and through the Gaslamp Quarter with Cinderella Carriage Co.

• Sampling hand-made sausages and artisanal cask beer at The Linkery, a restaurant serving rustic fare made exclusively with regional produce and meats sourced from local ranches.