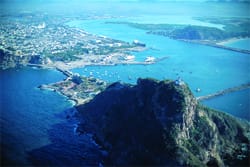 Bathed by the sea and encircled by cliffs, islands, and beaches, this city of glorious sunsets is situated midway on Mexico’s Pacific Coast, some 700 miles from the U.S. border and just south of the Tropic of Cancer.

The city’s name derives from the Aztec “land of the deer,” though the animals have become scarce, and fishing and sunshine are the primary visitor lures. Mazatlan boasts one of Mexico’s largest sport-fishing fleets, and anglers haul in some of the coast’s biggest catches — both in size and number.

Mazatlan radiates a resort atmosphere in the shade of jacarandas and poincianas. A 10-mile waterfront boulevard (“the malecon”) parallels the ocean, rambling past Zona Dorada, the heart of high-rise tourist land, and south into the historic soul of the city.

The malecon culminates at Fisherman’s Monument. A tribute to the city’s principal industry and the sensuality of the tropics, the oversized sculpture depicts a reclining nude woman beckoning a muscular fisherman. Surrounding it — still robust and colorful since its 16th century Spanish founding — vintage Mazatlan has spread into the peninsula.To explore its original core, El Centro, start at the Zocalo (main square), with its charming bandstand on Plaza Principal across from the ornate, twin-spired Mazatlan Cathedral. On facing streets are the city hall and post office. Just south is the restored 19th century Teatro Angela Peralta. Once a flourishing opera house, it is now a historical monument named for the celebrated singer who died next door.

Visit the oldest building in town, Capilla de San Jose, a pretty whitewashed chapel built on Summit Hill in 1870 by Italian padres. Also worth a look is historic Hotel Belmar on Avenida Olas Altas, the No. 1 hotel when Mazatlan tourism began. Its painted tiles, old bullfight posters, and dark-wood interiors date back to the turn of the 20th century.

From a nearby rocky promontory, El Faro overlooks Mazatlan’s sport fish-ing fleet. The second-highest lighthouse in the world after Gibralter, El Faro rewards climbers with spectacular city and coastline views.